Surveillance society: 7 ways you're being watched, and didn't know it 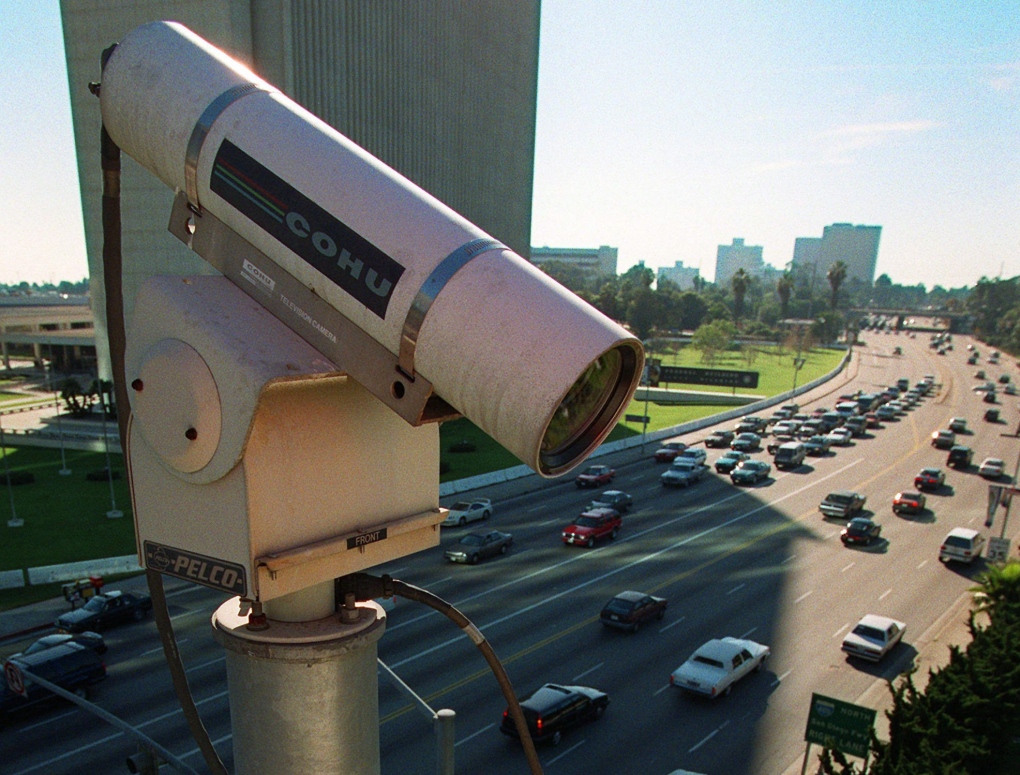 A remote camera for the Los Angeles Department of Transportation is seen on Jan. 8, 1997. (AP / Michael Caulfield)

We are being watched. That much we know.

This realization has hit home in recent weeks, after the National Security Agency in the U.S. admitted it tracks the metadata surrounding the billions of digital messages Americans send every day, searching for links that point to potential terrorist activities.

Then it emerged that Canada's NSA equivalent -- the Communications Security Establishment Canada -- also mines the metadata associated with the calls, texts and instant message Canadians exchange, with similar goals.

But many Canadians don't realize that the way we spend our money, the things we look at online or share via email, even the stuff we "like" is being tracked, compiled and catalogued by private companies.

And we give them our approval to do so every time we log onto our favourite social media service or download the latest app for our smartphone.

Here are seven everyday ways you probably never even suspected you were being tracked, according to Keith Murphy, CEO of Ottawa-based Internet security firm Defence Intelligence.

The pictures you take every day without thinking twice

"When people take pictures, by default just about any smart phone will tag the geo-location information, the GPS co-ordinates of where and when that picture was taken, everything about your phone and potentially even your actual user data, every time you take a picture," Murphy tells CTVNews.ca.

"Even digital cameras do the same thing in a lot of cases."

And if it isn't your phone or camera sending out your private data, the social media services you use will generally oblige. Whether it's Instagram, Google's Picassa, Tumblr, Snapchat, almost all photo services also upload location and user information by default, along with the photo itself.

They're tracking you through your phone!

If this sounds scary - it is.

In 2011, security researchers revealed that the daily movements of Apple iPhone owners were being tracked, and that the information was saved on the device along with GPS co-ordinates and time stamps. If your phone was obtained by the wrong person, they would theoretically have access to a ton of information about your life.

Apple scaled back after the story broke, but it serves as a reminder that your phone uses information about where you are all the time, Murphy says.

"By default, most of the programs on your phone use location services, Google for example, to give you better search results. If you want to find a pizza place, it's using GPS to tell them: 'OK, you're in Ottawa or Toronto, let's only search for places close to that location.' "

It's not just the company that made your phone that knows what you're up to. Theoretically, any third-party company that designs apps for Apple or Android phones, for example, also has access to the data stream your phone is collecting, as soon as you download their application.

"It's one thing if you want to trust Google or Apple -- though it's probably not the best idea -- but all the third-party vendors making applications for Apple and for Google are privy to that information as well."

Say you don't have a Facebook account, but you check out the vacation pics your friend posted to his timeline. Murphy says Facebook will then install a cookie on your computer or mobile device, which will in turn send the company data about your web habits every time you visit a page with a Facebook "like" button, for as long as that cookie remains on your computer.

"A lot of people will say 'I don't use Facebook so what do I care? If you've ever looked at someone's Facebook posts or the pictures they've posted to Facebook, you're being tracked too," Murphy says.

We've all been creeped out by the appearance of seemingly tailor-made ads popping up in our Facebook feeds. Perhaps you're planning a camping trip, and suddenly outdoor gear retailers are blasting you with ads.

It's not shocking. At this point, we pretty much expect it. But every once in a while, an ad pops up that seems to take the creepiness to another level. An engagement ring store, just before you pop the question, for example -- something you know you haven't blabbed about on Facebook.

Murphy says that's because Facebook or Gmail can track the other sites we visit elsewhere on the web, so long as we're still logged in to their service in a different browser tab.

Gmail even admits to scanning our emails for keywords and content it can use to target ads.

"It's not anonymous anymore. They know your name, your birthday, they know you're going to this site, staying for that long, and so on and so forth," Murphy says.

Are rewards cards worth the risk?

It's hard to resist the allure of a good rewards card. Whether it's a Home Depot credit card, a Shoppers Drug Mart Optimum card or Air Miles, we use them all the time to get discounts, member benefits or to accrue points towards free stuff.

What most of us don't realize, Murphy says, is that those reward services are keeping a detailed record of what we buy, and when and where we buy it - valuable information that is typically being collected by third-party marketing or advertising firms, and can be sold to other retailers.

Facial recognition software means anyone can find you

Is your picture Google-able? Has a friend ever posted your photo to their unprotected Facebook page? Has your image been sent to Twitter or Flickr? Chances are you answered 'yes' to one or all of those options. And if so, anyone who really wants to can probably find out your name, and a lot more.

"You can take a picture of someone on the street and within a few minutes on the Internet, chances are good you can find out exactly who that person is, exactly who their friends are, exactly what they like and don't like, where they shop and so on. And that's just through commercially available facial recognition software," Murphy says.