Study warns that unmanned drones over Canada could be 'intrusive' 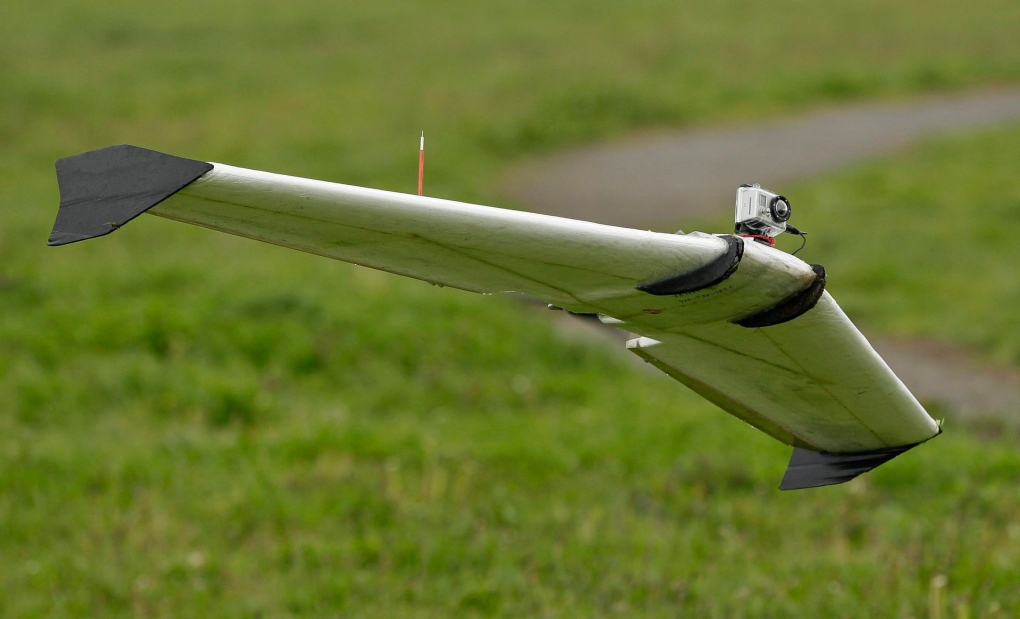 A Ritewing Zephyr II flies with a GoPro camera mounted on it flies over a waterfront park in Berkeley, Calif. in this March, 28, 2012 photo. (AP / Eric Risberg)

OTTAWA -- There must be clear policies about the sort of personal information flying drones are allowed to collect before Canadian police and others begin using them on a large scale, warns a new study.

The groundbreaking research report on drones -- unmanned eyes in the sky -- urges law enforcement agencies, governments and privacy commissioners to work together to ensure civil liberties are respected as more of the miniature craft take to the air.

It says unmanned aerial vehicles, or UAVs, can offer potentially significant cost savings for police and could be useful for responding to emergencies or performing mundane chores.

However, the "potential for intrusive and massive surveillance" means public discussion is needed to reassure Canadians they will not be arbitrarily spied upon, the study concludes.

Ultimately, the federal government "lacks a clear policy" on the devices, it adds.

A copy of the study, to be released next week, was made available to The Canadian Press by authors Christopher Parsons and Adam Molnar of Block G Privacy and Security Consulting. They sifted through academic articles, court rulings and revealing Access to Information documents, uncovering many unanswered questions about the budding technology along the way.

The devices, which range in size from a bird to a small plane, are usually outfitted with cameras but can also carry thermal imaging devices, licence plate readers and laser radar. They can be potent military weapons and, in peacetime, are used for everything from filming movie scenes and detecting radiation to monitoring crowds and photographing accident scenes.

In Canada, UAVs are regulated by Transport Canada as aircraft under the Canadian Aviation Regulations.

The RCMP is eyeing creation of a national fleet of small helicopter-like drones with cameras to help investigate offences, reconstruct traffic accidents, and assist with search-and-rescue.

The Mounties have said they are not being used for general surveillance of people or vehicles.

The study notes keen interest from Canadian police forces, but says law enforcement agencies have not "sought feedback from the public on how UAVs should or should not be adopted as a tool to serve the public interest."

The authors also cite safety and security concerns, including the potential for crashes or even the hacking of a drone to intercept the data it is collecting or make it steer off course.

Among the study's recommendations:

"The time for such well-balanced policy making is now," the study says.

In her recent annual report, federal privacy commissioner Jennifer Stoddart notes that National Defence uses drones "in field operations outside Canada" while the National Research Council has planned limited trials with the aim of improving navigation.

A late 2012 poll conducted by Stoddart's office found that four out of five people surveyed were comfortable with police use of drones for search-and-rescue missions. But only two of five approved of their use in monitoring public events or protests.

"Considering the capacity of UAVs for surreptitious operation, the potential for the technology to be used for general surveillance purposes, and their increasing prevalence -- including for civilian purposes -- our office will be closely following their expanded use," says the annual report.

"We will also continue to engage federal government institutions to ensure that any planned operation of UAVs is done in accordance with privacy requirements."