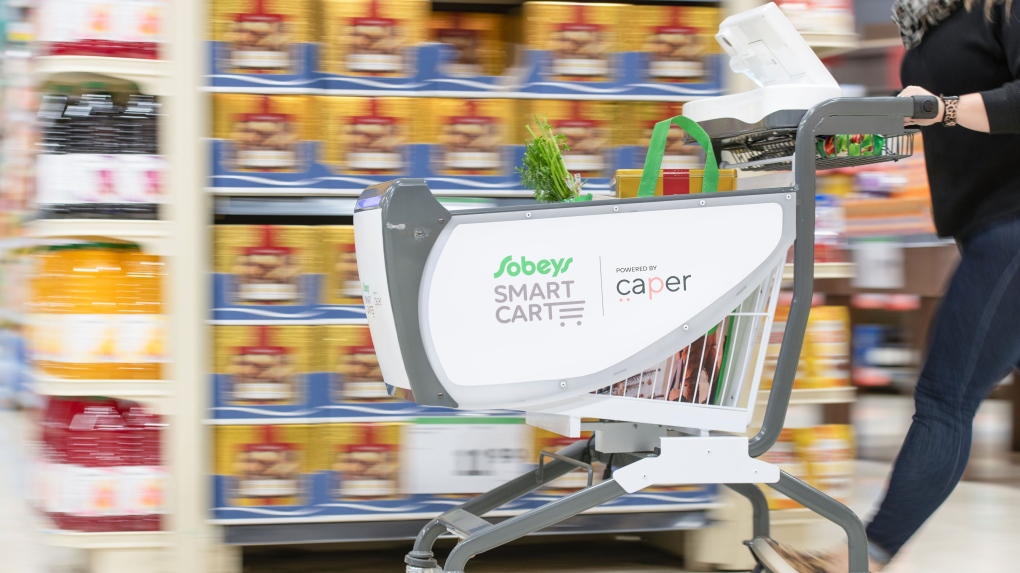 Sobeys' new "smart cart" will allow customers to scan items and checkout on the spot. (Sobeys)

Grocery carts will be able to do much more than haul food around thanks to new technology that allows shoppers to skip checkout lines and pay at their cart as grocers scramble to innovate in a changing retail landscape.

On Thursday, Sobeys introduced an intelligent “smart cart” at its Glen Abbey location in Oakville, Ont. as part of a new pilot project. Each cart features its own scanner, which allows customers to scan an item’s barcode before placing it into the basket. For products that don’t have a barcode, such as fruits or vegetables, the cart will weigh the item once it’s in the basket.

The grocer said the cart’s artificial intelligence and machine-learning technology will eventually allow it to identify products instead of scanning them. To accomplish this, the cart will rely on multiple high-resolution cameras that can capture 120 images per second of a product as it’s being placed in the basket.

“Customers will eventually be able to toss their items into the cart without having to enter any information or scan barcodes,” the company stated in a press release on Thursday.

As for perhaps the most time-consuming aspect of grocery shopping – waiting in line at the checkout – Sobeys said its smart cart will do away with that process entirely. The carts are equipped with touchscreen displays that show the running tally for the cost of the items and on-board payment terminals so consumers can pay at their cart when they’re finished shopping.

While other grocers have already introduced stationary self-checkout stations, Sylvain Charlebois, a professor in food distribution and policy at Dalhousie University in Halifax, said Sobeys’ high-tech carts address a major flaw in those operations.

“You do have to go through all of the motions of scanning and doing the work that someone else would have done, but in this case you’re actually adding value to the experience because you don’t have to wait in line,” he explained during a telephone interview on Friday.

Charlebois also said the company’s plan to develop the smart carts’ technology so they can recommend products and recipes and navigate users to specific aisles in the store will add even more value to the experience. In fact, the introduction of GPS technology could be beneficial to any large store, according to Charlebois.

While he acknowledges retailers have needed to innovate in order to compete against the e-commerce giant Amazon, marketing expert and host of the podcast "Chatter that Matters," Tony Chapman, said he’s “worried” about the ongoing trend towards automation.

“They are shifting the labour from their operation to the consumer, but doing so under the auspices of convenience,” he said.

Chapman said inventions, such as self-checkout stations or Sobeys’ carts, will eliminate important jobs for the economy.

“Here is the harsh reality. Machines are getting faster, better and cheaper. They don’t take breaks, holidays, and they work in 24-hour shifts. They don’t go on strike,” he said. “This economy change will be as devastating as climate change. People get more than money from having jobs. They get purpose, social interaction.”

Sobeys, however, said its new carts will free up employees so they will have more time to interact with customers and answer questions about food and new products.

Although Chapman characterized that idea as “PR spin,” Charlebois said he doesn’t believe any jobs will be lost, they will just evolve.

“AI won’t cut jobs, won’t kill jobs. I actually do think that companies, including grocers, will require probably the same amount of employees with different skill sets,” he said.

Instead of manning the cashier and moving inventory, Charlebois said employees will be able to spend their time developing strategies and managing products.

Chapman said retailers will succeed so as long as they give customers more of what matters to them, such as personalization, choice and convenience, and less “friction” in the process.

Charlebois said consumers will respond to new innovations so as long as the technology works the way it’s intended. He cited the difficulties some grocery stores have had rolling out self-checkout stations as an example, but noted that banks’ ATMs are proof that it can be successful.

As for the future of grocery shopping, Chapman said companies will have to focus on providing customers with better in-store experiences, such as culinary classes, restaurants, and meal kits in order to compete with online retailers.

While Charlebois said he foresees more customers demanding delivery services for their groceries, he thinks that will only make up between 7 or 8 per cent of total sales. The rest of the sales, he said, will come from brick-and-mortar stores that will be forced to adapt and create more conveniences, such as the smart cart, in order to survive.

“This is a significant thing coming from Sobeys on what’s to come,” he said.