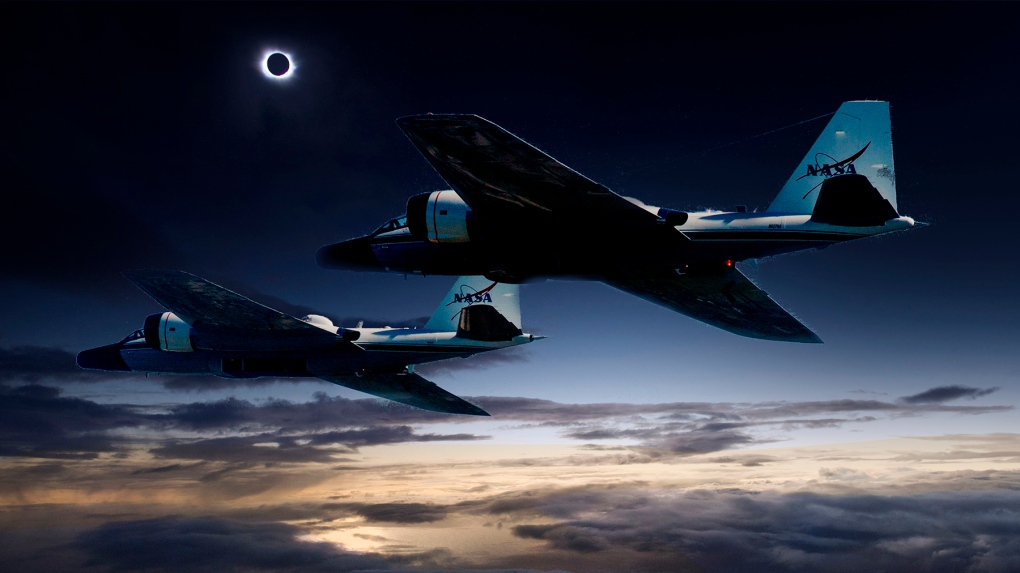 Racing 50,000 feet high in the stratosphere above the eastern U.S., two retrofitted jet planes will chase the moon’s shadow during next month’s highly-anticipated total solar eclipse.

A team of NASA-funded scientists on land will be able to observe the eclipse on Aug. 21 through telescopes affixed on the noses of the retrofitted WB-57F jet planes. The images captured by the instruments will allow the researchers to view the total solar eclipse for nearly three times longer than they would using equipment on the ground.

The researchers will be able to watch the phenomenon for more than seven minutes instead of less than two-and-a-half minutes, which will be the case for most viewers on land, team leader Amir Caspi from Southwest Research Institute in Colorado told CTVNews.ca on Friday.

The extra time will allow them to capture high-speed images of the Sun’s outer atmosphere, the “corona.”

Using the high-flying planes will also ensure the observations aren’t “clouded out” or disturbed by the Earth’s “atmospheric turbulence,” Caspi explained.

The images could provide them with the “best ever” observations of the corona, said co-investigator and researcher Dan Seaton.

“Extending the observing time and going to very high altitude might allow us to see a few events or track waves that would be essentially invisible in just two minutes of observations from the ground,” Seaton said.

NASA explained that the total solar eclipse is the perfect opportunity for scientists to study the Sun’s outer atmosphere because “as the Moon completely covers the Sun and perfectly blocks its light during an eclipse, the typically faint corona is easily seen against the dark sky.”

Scientists are seeking to understand why the atmosphere furthest from the Sun itself, the corona, is actually hotter than the ones closest to it, such as the photosphere.

NASA contends that scientists still don’t know for sure how this happens and that there are a number of theories out there.

One such theory suggests that tiny “micro explosions” called “nanoflares” might be releasing the unexplained heat, Caspi said. Because of their small size and our technical limitations, Caspi said no one has ever been able to directly observe the nanoflares.

“We don’t know where these nanoflares occur,” Caspi said. “If they occur higher up in the corona, then we might be able to see the collective effect of the magnetic field being reconfigured by these little explosions.”

Caspi said another theory that may explain why the corona is so hot involves waves carrying energy from the solar surface out into the atmosphere.

“We know that those waves exist and we’re trying to find out if they carry enough energy and if we’re going to see them,” he said.

In addition to the corona, the scientists also plan to take images of Mercury in order to map the variation of temperatures across the planet’s surface for the first time ever.

“We will be able to get multiple points along Mercury’s surface to measure what part of Mercury’s surface is at what temperature, or at least that’s the hope,” he said. “Nobody’s ever done this before so we don’t know if we’re going to be 100 per cent successful.”

The reason they’re attempting to create a heat map of Mercury’s surface is so they can determine the properties of the planet’s soil, which may then teach them about how Mercury and other rocky planets like it are formed.

The two jet planes carrying the team of researchers will take off near NASA’s Johnson Space Center in Houston, Tex. and fly over Missouri, Illinois and Tennessee as it tracks the eclipse.

The total solar eclipse is expected to be visible over 14 U.S. states on Aug. 21, while the rest of North America will be able to witness a partial eclipse, when the moon obscures only part of the sun.