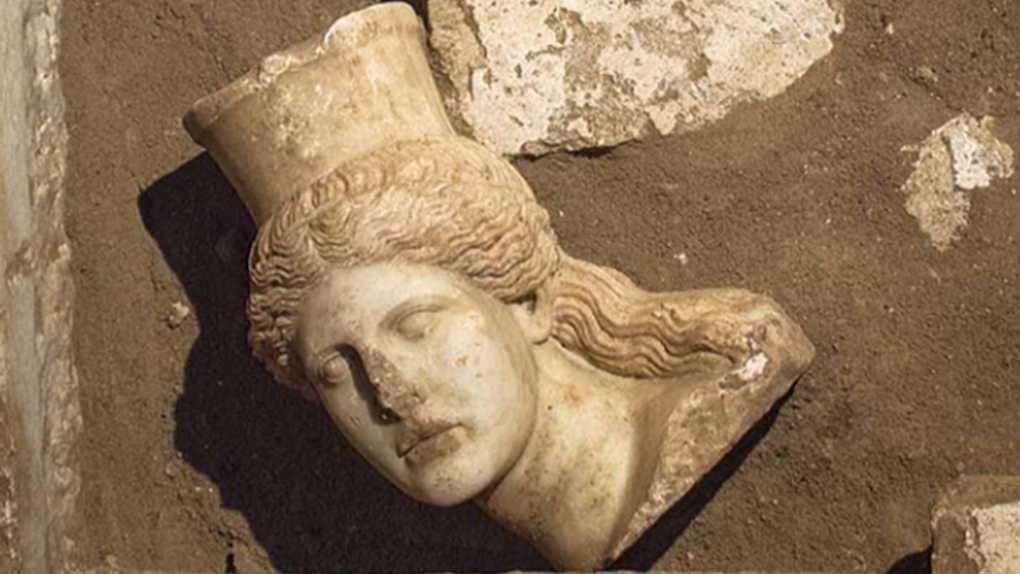 The broken-off head of a marble sphinx, one of a pair that decorated the entrance of a large 4th century B.C. tomb under excavation at Amphipolis in northern Greece. (AP / Greek Culture Ministry)

AMPHIPOLIS, Greece -- Scientists have opened the second phase of their excavation of the vast 4th-century BC burial mound in Amphipolis town in search of more tombs and bodies.

The first search of the site, which was built shortly after Alexander the Great's death, discovered and dug up a tomb containing a skeleton.

Greek Culture Minister Costas Tasoulas visited the burial mound in northern Greece on Saturday to announce the new phase of the exploration.

Geophysicists are scanning the site to see if there are other structures besides the splendid, three-chamber tomb discovered in August. The area being scanned is about one-seventh of the total of 2 hectares that the mound covers.

One goal is to try to calculate the discovered skeleton's gender and age. Identifying it may never be possible, even if its DNA is checked, said Lina Mendoni, the culture ministry's general secretary.

Speculation on the identity has been rife among experts, including speculation that it was Alexander's mother, widow, son, half-brother, or Nearchos, one of Alexander's closest aides and an Amphipolis native.

Meanwhile, archaeologists are still uncovering multicolored decorations found inside the dug up tomb. Lasers will be used to study them, Mendoni said.