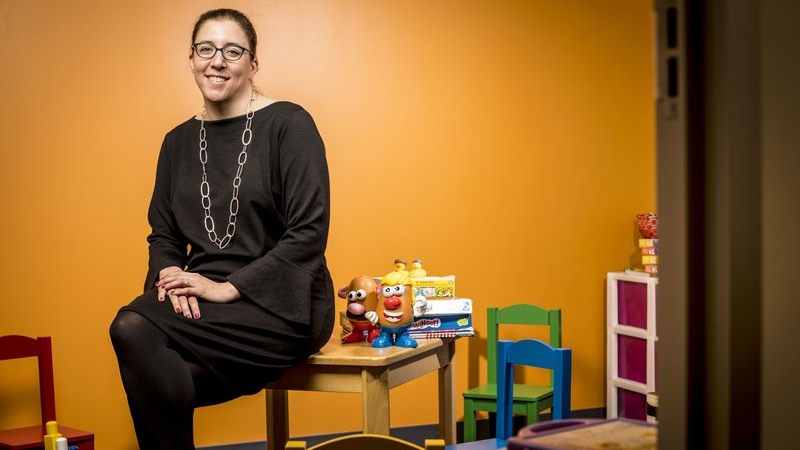 This March 2018 photo shows Kristina Olson in her laboratory in Seattle. She is the creator and leader of the TransYouth Project, which is considered the first large-scale long-term study of transgender children in the U.S. (Dennis Wise/University of Washington via AP)

The first large-scale, national study of transgender children, including some as young as 3, is poised to expand thanks to a five-year, $1 million grant awarded Thursday by the National Science Foundation to the professor leading the project.

University of Washington psychologist Kristina Olson, 36, was named winner of the NSF’s annual Alan T. Waterman Award, the government’s highest honor for scientists still in the early phases of their careers. The NSF said the choice was unanimous, and noted that pediatricians are already using her findings to raise awareness about gender diversity.

While the award citation honors Olson for a broad range of her research on children’s perceptions, she has become best known as creator and leader of the TransYouth Project, which is widely considered the most ambitious long-term study of transgender children being conducted in the U.S.

Launched in 2013, the project has recruited more than 300 children ages 3-12 from 45 states, with the goal of tracking their development over 20 years. The NSF grant will help Olson maintain the study as many of the children go through adolescence; she hopes to continue it into their adulthood.

“‘Transgender children’ is a category we have so little scientific knowledge about,” says Olson. “I’m interested in their experience of feeling you are in a social category that other people don’t think you’re a part of."

Some of the study’s early findings were reported two years ago in the journal Pediatrics — notably that the 73 children being tracked at that time had rates of depression and anxiety no higher than non-transgender children in control groups. The trans children were supported by their families and allowed to live openly as the gender they identify with — suggesting to Olson that family support was a key to avoiding the mental health problems identified in studies of other transgender youths.

“In a very scientific way, our study shows that this group of kids is doing really, really well,” she said in a telephone interview.

She hopes the NSF grant will enable her to expand the study to encompass youths who are in the process of gender transition but haven’t completed it. Some of the funds will be used for Olson’s work on other topics, including race and inequality, and also to support research opportunities for undergraduates.

The TransYouth Project received positive coverage following the Pediatrics article, but Olson’s research also has been the target of criticism. An article last year in The Federalist, a conservative online magazine, asserted that it was “utterly ridiculous” to open a study on gender identity to a 3-year-old child “who is just learning to use the bathroom, spell his name, and the days of the week.”

However, Olson said children of that age, whether transgender or not, show awareness of gender identity in many ways, through their self-descriptions, what they wear, who they prefer to play with.

“People frequently compare early-identifying trans children with those who go through phases of believing they are cats or dinosaurs or who have imaginary friends,” Olson wrote recently. “Yet decades of work on gender development suggests these are precisely the ages at which nearly all kids are coming to understand their own and others’ gender identities.”

Olson said some critics incorrectly concluded that gender-altering surgery is being performed on the prepubescent children in her study.

She also stresses that the parents of the children already had decided to help them make a gender-identity transition — she’s not the one advocating for that. Even before she met the children, they were identifying with a gender different from the one they were born with — often adopting a new name, and different clothing, toys, activities and friends.

Among those skeptical of the study is Andrew Walker, a parent of two small children who is director of policy studies for the Southern Baptist Convention’s Ethics & Religious Liberty Commission.

“I am highly suspect of allowing children to be mature agents in determining this level of self-understanding,” he said. “That seems to be highly problematic and borderline reckless... putting drastically catastrophic decisions about a child’s life in the child’s hands.”

He also questioned the appropriateness of investing federal funds in “what is ultimately an ideological, contestable issue — the notion of gender fluidity.”

Olson said the vitriol directed at her, via email and social media, became so extreme that she avoided talking to the media for about eight months.

“It doesn’t feel good to have people saying negative things about you,” she said. “You just have to keep going.”

Cheryl Kaiser, chair of the UW psychology department, described Olson’s foray into the project as a “striking act of bravery.”

Olson is the first psychologist to receive the Waterman Award, which was established by Congress in 1975.