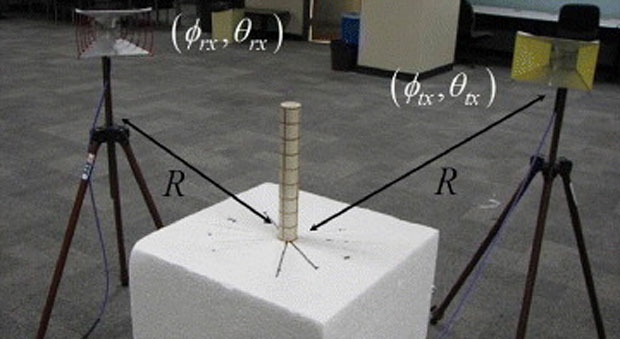 The experiment is shown here at the lab at the University of Texas in Austin. Physicists were able to cloak the cylinder, making it invisible to microwaves.

Scientists have finally created an invisibility cloak similar to the one foretold in the Harry Potter franchise and in Philip K. Dick's "A Scanner Darkly," though so far it only works on microwave light and is only available in a miniature prototype.

Physicists at the University of Texas in Austin took a new approach to the tantalizing challenge. Instead of the method widely pursued until now, where scientists used a "metamaterial" to hide an object from view by bending visible light around it, the team managed to apply a "mantle cloaking" technique that cancels out waves bouncing off the shielded object.

"We have experimentally verified a new route to render a 3D object standing in free space invisible to radio waves, without requiring a bulk metamaterial cover," said the study, published Tuesday in the New Journal of Physics.

Humans detect objects when waves -- whether they be sound, light, x-ray or microwave – bounce off the object's surface and reach our senses.

But in this study, the scientists managed to render the object – an 18-centimetre cylindrical rod – effectively invisible by preventing the microwaves from bouncing off the rod as they normally would.

"When the scattered fields from the cloak and the object interfere, they cancel each other out, and the overall effect is transparency and invisibility at all angles of observation," said Andrea Alu, co-author of the study, in a release.

The cylinder could still be seen by the naked eye, but the researchers said the model could potentially work on visible light as well as microwaves.

The team wrapped the cylinder in a “mantle-cloaking” material made from copper tape mounted on a layer of polycarbonate, "providing the required inductive surface impedance such that, when excited by an external wave, it would support a scattering response that is 'opposite' to the one of the object, cancelling out most of the scattered waves," said the study.

Effectively, that means waves hitting the object scattered in a way that rendered the 3D object invisible.

Researchers said they believe the technology, in principal, could also be used to hide objects from visible light, regardless of their shape. However, the larger the object the more difficult it will be to render invisible, they say.

Though a full Harry Potter-esque invisibility cloak is still a long way off, the research suggests science is closer than ever before to achieving such a goal. And there are practical implications to the work. The researchers say their discovery could potentially be used in biomedical instruments or non-invasive sensing devices.