Look of love? U.S. man invents engagement ring that glows whenever he's near 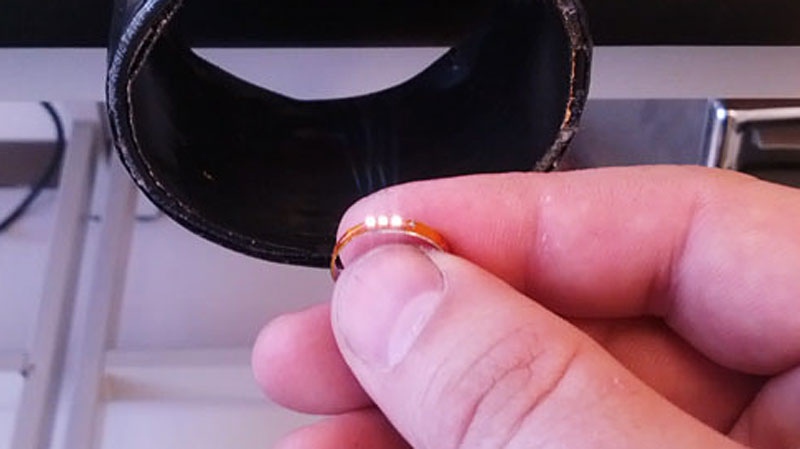 This image, courtesy of kokes.net, shows a prototype version of the ring being tested in Kokes' shop.

A California man spent months designing an engagement ring for his girlfriend that would prove, in a very practical way, that she was the light of his life by glowing every time he came near.

And it worked … at least for the proposal.

Ben Kokes, an inventor who lives in San Francisco, documented the months-long process on his blog.

"Once upon a time, a boy met a girl. Then a short amount of time later, the boy decided to design and build a ring for the girl, because doing things in the most complicated way possible is just what he does to show the love. This is that story," he wrote on the blog, before detailing the complex procedures involved in designing and building the ring.

The process began in January, when Kokes decided he wanted to create a ring for his girlfriend Julie that would somehow detect his presence. He decided to make it glow from the inside whenever he was close, with the internal light source sending beams out through the ring’s stones.

Of course there was no room for a battery on the delicate piece of jewelry, so he had to conceive a clever way of transmitting energy.

The simple yet somewhat impossible-sounding objective led to months of secretive toil in a nearby machine shop.

After nine failed prototypes, Kokes managed to create a titanium engagement band with stones set all the way around in an "infinity" style setting.

Inside the ring, Kokes embedded an LED and copper coil assembly. When that copper coil comes in close contact with an induced alternating magnetic field – contained an easily-concealed bracelet he built and wears on his wrist, hidden under a jacket sleeve -- presto, the ring lights up with the glow of love.

Kokes proposed to his girlfriend earlier this month while they were hiking in the hills outside San Francisco. He presented the ring, popped the question, and placed it on her finger.

When she said "yes," he moved his hand closer, allowing the ring's LED to activate and produce the glow.

Kokes admits there was a "small hitch" or two in the design. Due to a "small miscalculation," the ring was a slightly tight fit for his now-fiancee. He had to build another version to fit her finger more comfortably.

And although the ring performed brilliantly during the proposal, it stopped working the next day. Kokes is currently working on a more stable version.