Increase in Antarctic ice may be sign of climate change 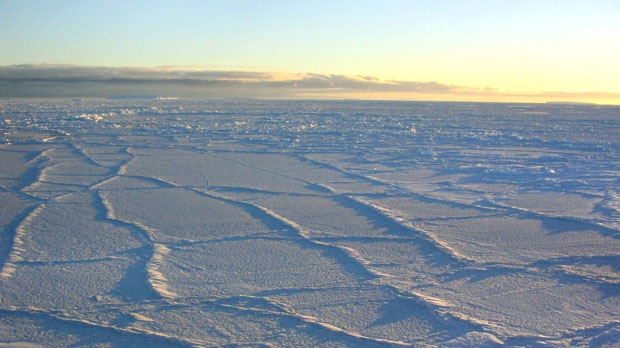 The Antarctic sunlight illuminates the surface of the sea ice, intensifying the effect of the fracture lines, Oct. 2003. (NSIDC, University of Colorado)

The ice goes on seemingly forever in a white pancake-flat landscape, stretching farther than ever before. And yet in this confounding region of the world, that spreading ice may be a cockeyed signal of man-made climate change, scientists say.

This is Antarctica, the polar opposite of the Arctic.

Climate change skeptics have seized on the Antarctic ice to argue that the globe isn't warming and that scientists are ignoring the southern continent because it's not convenient. But scientists say the skeptics are misinterpreting what's happening and why.

Shifts in wind patterns and the giant ozone hole over the Antarctic this time of year -- both related to human activity -- are probably behind the increase in ice, experts say. This subtle growth in winter sea ice since scientists began measuring it in 1979 was initially surprising, they say, but makes sense the more it is studied.

"A warming world can have complex and sometimes surprising consequences," researcher Ted Maksym said this week from an Australian research vessel surrounded by Antarctic sea ice. He is with the Woods Hole Oceanographic Institution in Massachusetts.

Many experts agree. Ted Scambos of the National Snow and Ice Data Center in Colorado adds: "It sounds counterintuitive, but the Antarctic is part of the warming as well."

And on a third continent, David Vaughan of the British Antarctic Survey says that yes, what's happening in Antarctica bears the fingerprints of man-made climate change.

"Scientifically the change is nowhere near as substantial as what we see in the Arctic," says NASA chief scientist Waleed Abdalati, an ice expert. "But that doesn't mean we shouldn't be paying attention to it and shouldn't be talking about it."

Sea ice is always melting near one pole while growing around the other. But the overall trend year to year is dramatically less ice in the Arctic and slightly more in the Antarctic.

It's most noticeable in September, when northern ice is at its lowest and southern ice at its highest. For over 30 years, the Arctic in September has been losing an average of 5.7 square miles (14.76 million square kilometres) of sea ice for every square mile gained in Antarctica.

Loss of sea ice in the Arctic can affect people in the Northern Hemisphere, causing such things as a higher risk of extreme weather in the U.S. through changes to the jet stream, scientists say. Antarctica's weather peculiarities, on the other hand, don't have much effect on civilization.

At well past midnight in Antarctica, where it's about 3 degrees Fahrenheit (minus 16 Celsius), Maksym describes in a rare ship-to-shore telephone call from the R.V. Aurora Australis what this extra ice means in terms of climate change. And what it's like to be out studying it for two months, with the nearest city 1,500 miles (2,415 million kilometres) away.

"It's only you and the penguins," he says. "It's really a strikingly beautiful and stark landscape. Sometimes it's even an eerie kind of landscape."

While the Arctic is open ocean encircled by land, the Antarctic -- about 1.5 times the size of the U.S. -- is land circled by ocean, leaving more room for sea ice to spread. That geography makes a dramatic difference in the two polar climates.

The Arctic ice responds more directly to warmth. In the Antarctic, the main driver is wind, Maksym and other scientists say. Changes in the strength and motion of winds are now pushing the ice farther north, extending its reach.

Those changes in wind are tied in a complicated way to climate change from greenhouse gases, Maksym and Scambos say. Climate change has created essentially a wall of wind that keeps cool weather bottled up in Antarctica, NASA's Abdalati says.

And the wind works in combination with the ozone hole, the huge gap in Earth's protective ozone layer that usually appears over the South Pole. It's bigger than North America.

It's caused by man-made pollutants chlorine and bromine, which are different from the fossil fuel emissions that cause global warming. The hole makes Antarctica even cooler this time of year because the ozone layer usually absorbs solar radiation, working like a blanket to keep the Earth warm.

And that cooling effect makes the winds near the ground stronger and steadier, pushing the ice outward, Scambos says.

University of Colorado researcher Katherine Leonard, who is on board the ship with Maksym, says in an email that the Antarctic sea ice is also getting snowier because climate change has allowed the air to carry more moisture.

Winter sea ice has grown by about 1 per cent a decade in Antarctica. If that sounds small, it's because it's an average. Because the continent is so large, it's a little like lumping together the temperatures of the Maine and California coasts, Vaughan says.

Mark Serreze, director of the snow and ice data centre, says computer models have long predicted that Antarctica would not respond as quickly to global warming as other places. Since 1960, the Arctic has warmed the most of the world's regions, and Antarctica has warmed the least, according to NASA data.

Scientists on the cruise with Maksym are spending eight to 12 hours a day on the ice bundled up against the fierce wind with boots that look like Bugs Bunny's feet. It's dangerous work. Cracks in sea ice can form at any time. Just the other day a sudden fissure stranded a team of scientists until an inflatable bridge rescued them.

"It's a treacherous landscape," Vaughan says.