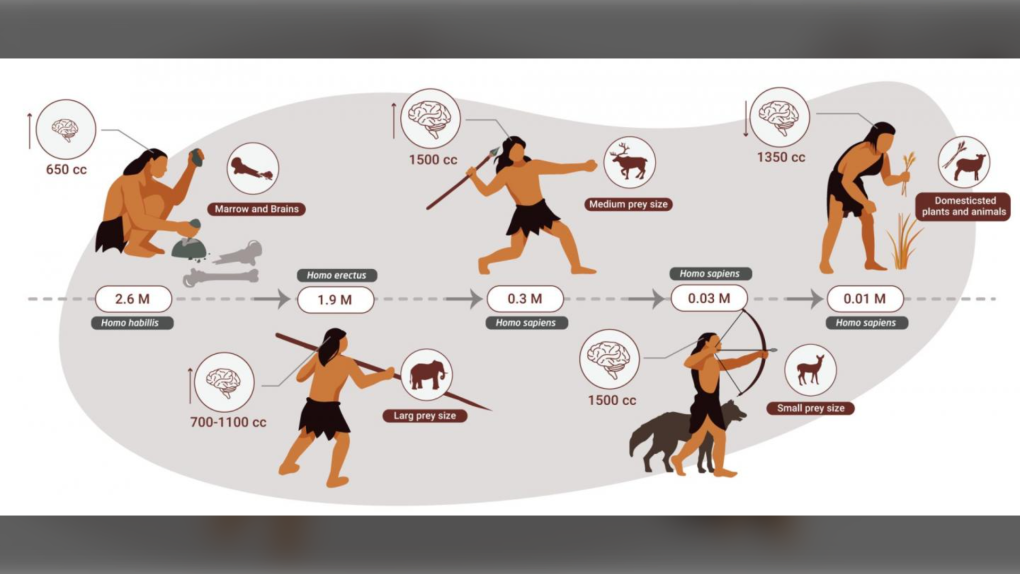 TORONTO -- Despite a widespread belief that humans owe their evolution to the dietary flexibility in eating both meat and vegetables, researchers in Israel suggest that early humans were actually apex predators who hunted large animals for two million years before they sought vegetables to supplement their diet.

In a study recently published in the American Journal of Physical Anthropology, academics from Tel Aviv University in Israel and the University of Minho in Portugal examined modern biology to determine if stone-age humans were specialized carnivores or generalist omnivores.

“So far, attempts to reconstruct the diet of Stone-Age humans were mostly based on comparisons to 20th century hunter-gatherer societies,” one of the study’s authors, Miki Ben-Dor, a researcher at Tel Aviv University, said in a press release.

“This comparison is futile, however, because two million years ago hunter-gatherer societies could hunt and consume elephants and other large animals - while today’s hunter gatherers do not have access to such bounty.”

Instead, the researchers looked at approximately 400 previous scientific studies on human anatomy and physiology as well as archeological evidence from the Pleistocene period, or “Ice Age” period, which began about 2.6 million years ago, and lasted until 11,700 years ago.

“We decided to use other methods to reconstruct the diet of Stone-Age humans: to examine the memory preserved in our own bodies, our metabolism, genetics and physical build,” Ben-Dor said.

They discovered 25 lines of evidence from the studied papers on human biology that seem to show that earlier Homo sapiens were apex predators at the top of the food chain.

For example, the academics explained that humans have a high acidity in their stomachs when compared to omnivores or even other predators, which is important for consuming animal products.

Another piece of evidence, according to the study, is the structure of human fat cells.

“In the bodies of omnivores, fat is stored in a relatively small number of large fat cells, while in predators, including humans, it's the other way around: we have a much larger number of smaller fat cells,” Ben-Dor said.

In addition to the evidence they collected by studying human biology, the researchers said archeological evidence from the Pleistocene period supports their theory.

In one example, the study’s authors examined stable isotopes in the bones of prehistoric humans as well as their hunting practices and concluded these early humans specialized in hunting large and medium-sized animals with high fat content.

“Comparing humans to large social predators of today, all of whom hunt large animals and obtain more than 70% of their energy from animal sources, reinforced the conclusion that humans specialized in hunting large animals and were in fact hypercarnivores,” the academics noted.

“Most probably, like in current-day predators, hunting itself was a focal human activity throughout most of human evolution. Other archeological evidence - like the fact that specialized tools for obtaining and processing vegetable foods only appeared in the later stages of human evolution - also supports the centrality of large animals in the human diet, throughout most of human history,” he said.

This is not to say, however, that humans during this period didn’t eat any plants. Ben-Dor said they also consumed plants, but they weren’t a major component of their diet until the end of the era when the decline of animal food sources led humans to increase their vegetable intake.

Eventually, the researchers said humans had no choice but to domesticate both plants and animals and become farmers.

Ran Barkai, one of the study’s authors and a professor at Tel Aviv University, said their findings have modern-day implications.

“For many people today, the Paleolithic diet is a critical issue, not only with regard to the past, but also concerning the present and future. It is hard to convince a devout vegetarian that his/her ancestors were not vegetarians, and people tend to confuse personal beliefs with scientific reality,” he said.