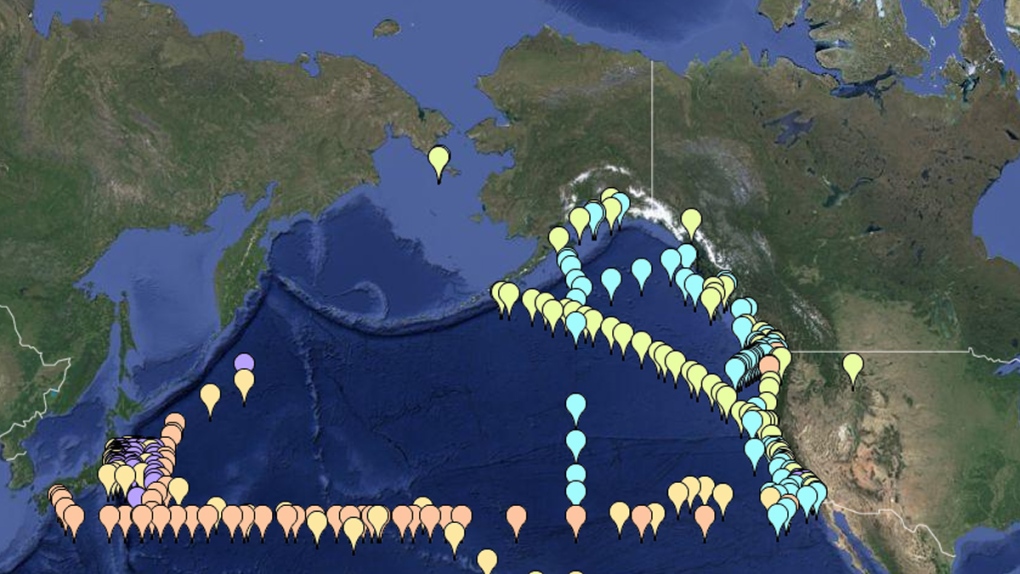 This screenshot from a Google Map shows points at which radioactive cesium was detected in the Pacific Ocean, following the Fukushima nuclear disaster of 2011. (Our Radioactive Ocean)

Scientists have detected heightened levels of radioactivity in the waters along the west coast of Canada and the United States, which can be traced back to the Japanese nuclear disaster in Fukushima in 2011.

The radiation levels are relatively minute, and do not pose a threat to human or marine life, according to a statement from the U.S.-based Woods Hole Oceanographic Institution, released on Thursday. The WHOI says the results are based on more than 245 samples collected along the west coast since 2011, and are helpful in studying the way ocean currents circulate around the world.

The radiation comes from Fukushima, Japan, where a nuclear disaster occurred at a power plant in March of 2011. A magnitude-9.0 earthquake and the resulting tsunami left the plant severely damaged, resulting in three core meltdowns.

Researchers found heightened levels of cesium-134, a fairly short-lived radioactive isotope, in many of the water samples collected along the west coast since 2011. The WHOI release says cesium-134 is a "fingerprint" of sorts for Fukushima, and can be distinguished from other radioactivity in the water, such as the cesium-137 left over from the nuclear weapons tests of the 1950s, '60s and '70s.

Cesium-134 has a half-life of about two years, meaning half of its material decays every two years. That's relatively quick when compared to the 30-year half-life of cesium-137, a byproduct of nuclear fission and weapons testing.

The most contaminated sample from the WHOI study was collected about 2,600 kilometres west of San Francisco, and contained a 50 per cent higher concentration of cesium than other samples collected along the coast. However, the sample still fell well below Canadian and U.S. minimum radiation standards for drinking water, and is considered safe for human swimming and recreation.

Ken Buesseler, the lead researcher on the WHOI study, says his study results show a need to monitor the Pacific's radiation levels more closely. The data will also be helpful in studying the movements of ocean currents, he said. "These long-lived radioisotopes will serve as markers for years to come for scientists studying ocean currents and mixing in coastal and offshore waters," Buesseler said in the WHOI release.

Buesseler has spent years monitoring the radioactivity produced from the Fukushima disaster. He says the power plant is still releasing cesium into the water, though radioactivity levels off Japan are now "thousands of times lower than during the peak releases in 2011."

The WHOI examined more than 100 samples collected through a citizen science project called Our Radioactive Ocean, which encourages Canadians and Americans on the west coast to collect water samples and share their radioactivity readings online.

Last year, a Canadian study found that cesium-134 from the Fukushima disaster was moving faster than expected toward North American shores, though the concentration was not high enough for concern. The study concluded that the cesium levels were more than 1,000 times below Canada's maximum acceptable concentration in ocean water.