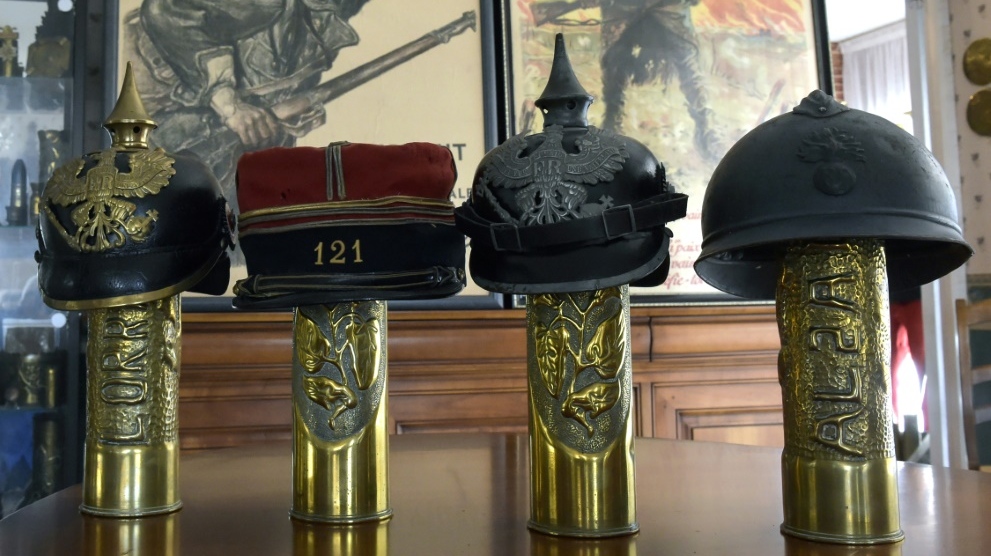 A new study found that the French 'Adrian' helmet (R) used in the First World War provided better protection from overhead blasts than a modern US model. (AFP)

WASHINGTON -- A helmet used by French soldiers in the First World War provided better protection from overhead blasts than a modern American model, according to a U.S. university study.

Biomedical engineers from North Carolina's Duke University tested the performance of several models of helmet from the First World War and the U.S. Advanced Combat Helmet by subjecting them to shock waves.

"While we found that all helmets provided a substantial amount of protection against blast, we were surprised to find that the 100-year-old helmets performed just as well as modern ones," said study author Joost Op 't Eynde.

The study, published in the journal PLOS ONE, found that the French First World War "Adrian" helmet performed better than modern designs in protecting from overhead blasts.

"This study is, to the best of our knowledge, the first to assess the protective capabilities of these historical combat helmets against blasts," Op 't Eynde said.

The helmets tested were the "Brodie" models used by American and British troops, the French "Adrian," Germany's "Stahlhelm" from the First World War and the modern U.S. Advanced Combat Helmet.

The tests were conducted on a dummy which was subjected to shock waves of varying strength approximating the blast of an artillery shell.

"The risk for someone wearing a circa-1915 French 'Adrian' helmet was less than for any of the other helmets tested, including the modern advanced combat helmet," the authors of the study said.

The French helmet has a crest on the top of its crown which the study's authors said may deflect shock waves.

"The difference a simple crest or a wider brim can make in blast protection, shows just how important this line of research could be," Op 't Eynde said.

"With all of the modern materials and manufacturing capabilities we possess today, we should be able to make improvements in helmet design that protects from blast waves better than helmets today or 100 years ago," he added.