Flooding in Alberta has changed the Rockies forever, says scientist 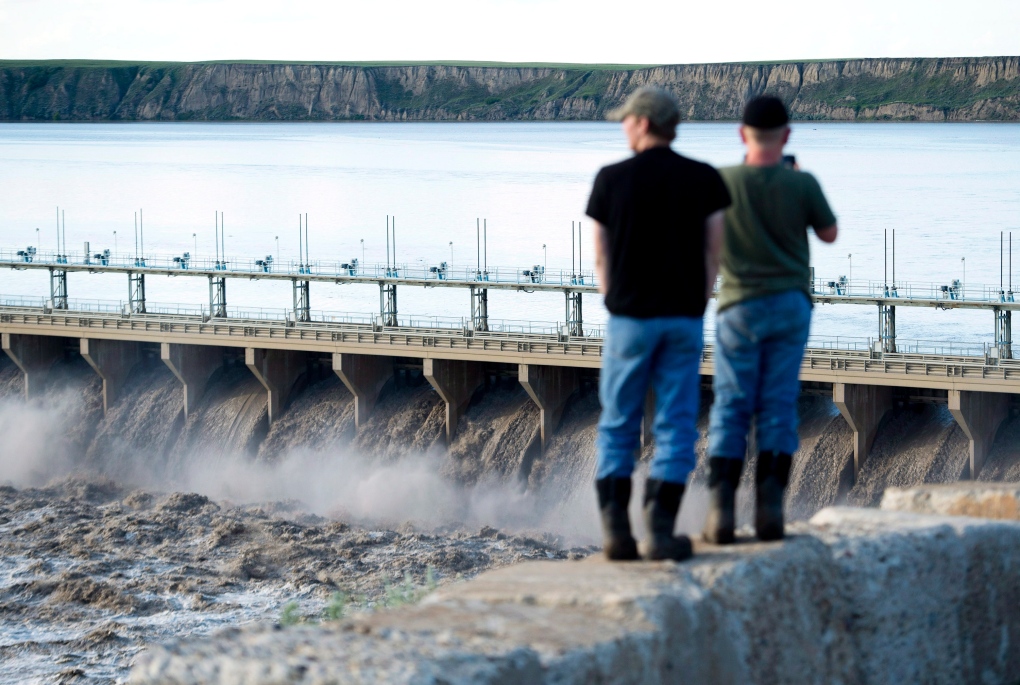 People watch as the Bassano Dam takes on water from the Bow River before meeting up with the South Saskatchewan River in Bassano, Alta. on Saturday, June 22, 2013. (Nathan Denette / THE CANADIAN PRESS)

CANMORE, Alta. -- Flooding in southern Alberta has changed the Rockies and their foothills forever and should force the province into providing better protection, says one of Canada's leading scientists.

John Pomeroy, who holds a Canada research chair in water resources and climate change at the University of Saskatchewan, says the natural disaster has permanently altered everything from how the landscape will handle future flooding to the Bow River's status as a world-class trout stream.

"The Rockies have changed from this," said Pomeroy, who spoke from the Alberta mountain community of Canmore, where he works at a field research station. "They're even going to look a little bit differently."

The fact rivers flooded near their alpine sources means they were relatively free of the kind of agricultural runoff that could have caused environmental major damage, he said. But those rushing mountain streams that morphed suddenly into torrents have caused their own ecological consequences.

An entire mountainside collapsed near one of the field station's research sites, Pomeroy said.

"A side of it sloughed off and a large section created a debris flow 50 metres wide through a little creek you could have jumped across."

That scene is likely to be echoed throughout the eastern slopes, Pomeroy said.

"Even if the climate stayed exactly the same and we just had regular precipitation events in the future, the way the watersheds translate rainfall and snowfall into streamflow is going to be different now.

"They need to be remapped."

Already, channels have changed so much that scientists can't even accurately measure how much water is churning downstream.

Those changes are likely to force plants and animals that live in the watershed to change as well. Some may not make it.

Trout, for example, need pebbly river bottoms to spawn. The Bow River has swallowed so much silt that the river's famous trout fishery may be threatened.

It's too soon to tell, but Pomeroy points to what happened when the Spray reservoir west of Calgary had to be emptied into the Spray River, which flows into the Bow.

"There was complete kill off of the trout in that river. They were wiped out."

Trout have been re-established in the Spray, but Pomeroy said the Bow system would be a much larger task.

Climate change models predict heavier rains, more precipitation falling as rain instead of snow and rain falling on top of snow -- all of which favour more flooding, said Pomeroy.

"This is Pacific Northwest U.S. weather we're getting and we're not built for it. We didn't design our cities, our floodways, our flood maps, anything for this. "

Alberta should build flood walls along the Bow River and manage its reservoirs for flood control as well as power generation, Pomeroy suggested. He said it was just luck that some reservoirs upstream from Calgary were unusually low and were able to hold back some of the water.

The province also will have to rethink what it considers developable land, said Pomeroy. The location of some developments in the Bow Valley are actually built on flood plains, something he calls "absurd hubris."

"We've got to live with it and that means not developing in certain areas," he said. "We can't engineer our way out of this."