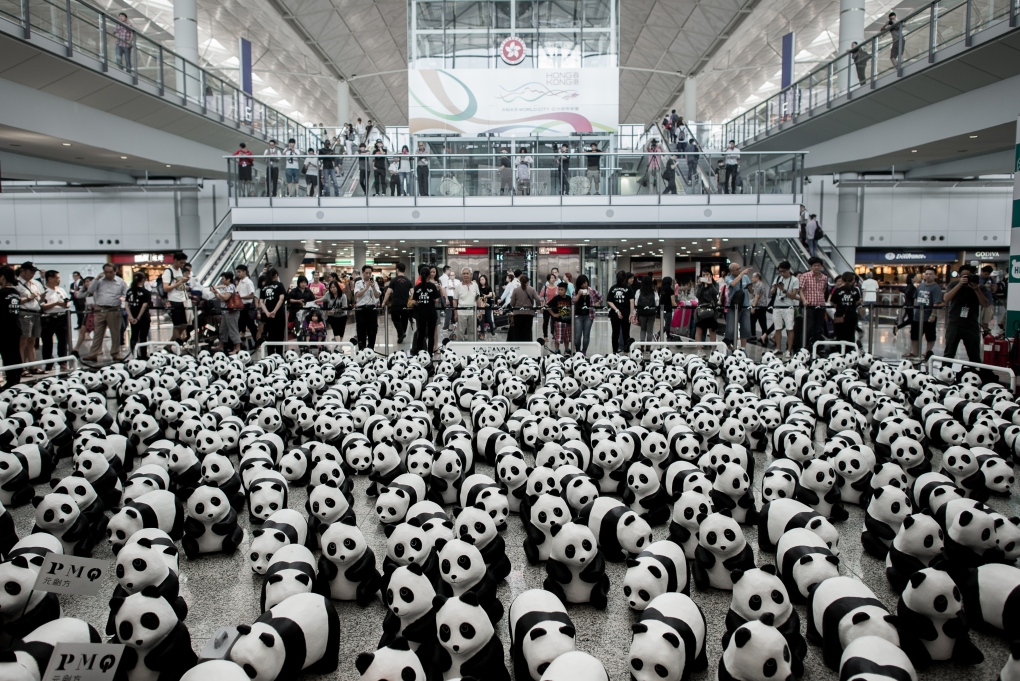 Some of the 1,600 paper mache pandas are seen displayed at Hong Kong's international airport on June 9, 2014 as part of their first appearance in the city. The event, consisting of placing 1,600 papier-mache pandas in various cities around the world, was created by French artist Paulo Grangeon in collaboration with the WWF and is aimed at raising awareness of the endangered species. (AFP Photo / Philippe Lopez)

HONG KONG (AFP) -- An army of papier mache pandas swarmed the arrivals area at the Hong Kong airport Monday as part of a charity campaign to promote conservation of the endangered bears.

The display of 1,600 papier mache pandas was the first of a series of events planned across the city, as part of a month-long "1,600 Pandas World Tour" campaign.

Designed by French sculptor Paulo Grangeon, the panda installation has already been displayed in other cities including Berlin, Paris and Taipei, before reaching Hong Kong, home to several of the bears.

"Themed around pandas' state of endangerment, the army of 1,600 papier mache pandas shines a spotlight on conservation and sustainable development," a statement issued by PMQ, one of the organizers, said.

Organizers say the city will see "flash mobs of pandas" descend on various Hong Kong landmarks including Victoria Harbour, the Shatin racecourse and the city's trams during the campaign.

Videos and pictures of the artwork flooded social networking sites in Hong Kong following the start of the exhibition, including a clip created by a local airline showing the pandas sitting on board a flight to symbolize their "arrival."

According to environmentalist group WWF, which uses the bear as its logo, there are only about 1,600 giant pandas left in the wild, making it an endangered species.