Earth's core 1,000 degrees hotter than thought, on par with the sun 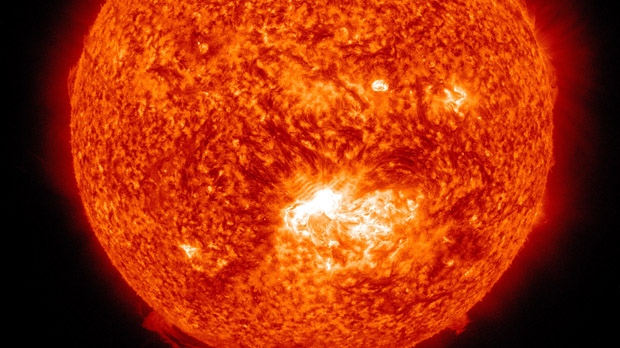 This image captured in the 304 Angstrom wavelength, which is typically colorized in red, and provided by NASA shows a solar flare, lower centre, erupting from the sun Thursday, July 12, 2012. (AP / NASA)

Think it’s hot on the sun? Well it’s just as hot under your feet, according to new research suggesting the Earth's core is a scorching mass of iron that's roughly the same temperature as the sun.

Scientists at France's CEA research agency revealed their new findings Friday in a study published in the journal Science.

The Earth is believed to have a solid core, consisting mainly of iron in a crystalline state. Surrounding that solid core is an outer core comprised of scorching-hot liquid.

The temperature of the crystalline centre has been the subject of an enduring debate, with scientists unable to agree on how the iron might behave in the intense pressure and heat of that environment.

The CEA researchers were able to simulate the phenomenon, however, by compressing a sample of iron in a laser-heated diamond anvil cell -- a device which essentially squeezed the sample between two synthetic diamonds. Then, they used lasers to increase the temperature of the sample while the pressure was cranked up to more than a million times that of the Earth’s atmosphere at sea level.

X-rays were then fired at the iron sample, while its texture and structure were observed during the transition from solid to liquid – giving new insights into the behaviour of partially molten iron and the temperatures at which iron crystalline can form.

According to the experiment, the Earth's core is 1,000 degrees hotter than previously thought -- making it 6,000 C, on par with the temperature on the sun.

"The accurate determination of the melting temperature of iron provides an important constraint on the core temperature, which is essential to understanding how the dynamic Earth works, including its heat budget, generation of its magnetic field, and the thermal evolution of the planet. high heat flux at the core-mantle boundary with a possible partial melting of the mantle," wrote researcher Yingwei Fei.

The research has provided scientists with the most definitive look yet into how the planet's iron core looks and behaves.