Decline of Mexico's Monarch butterflies a trend, not a blip: scientists 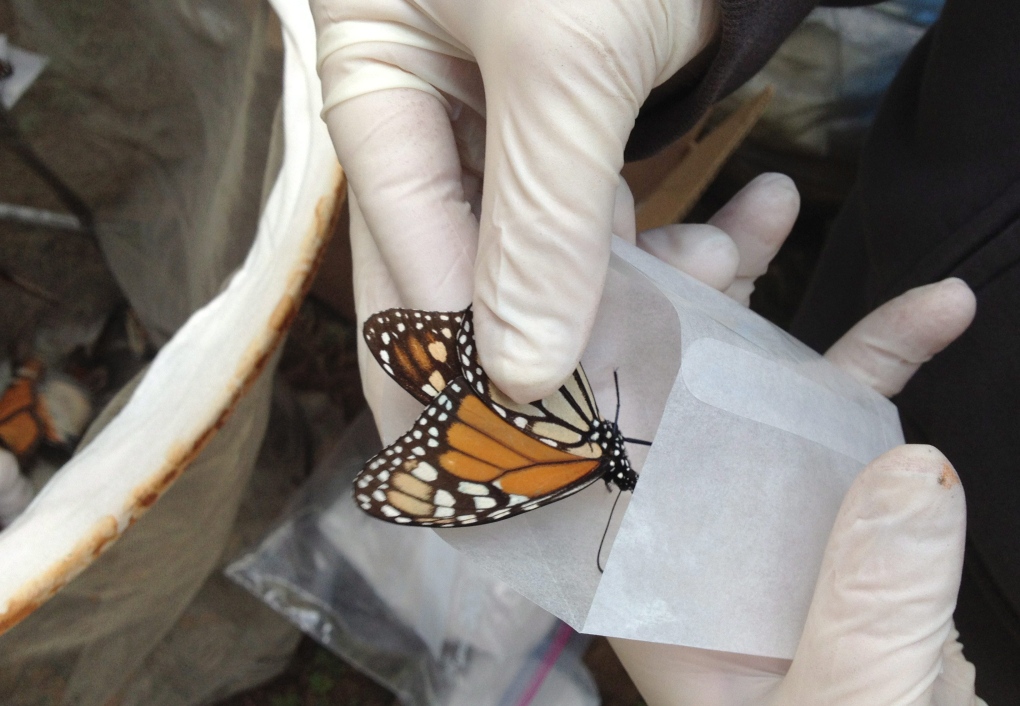 A scientist collects a Monarch butterfly to be tested for the ophryocystis elektroscirrha parasite that inhibits their flight, at El Capulin reserve, near Zitacuaro, Mexico, Feb. 15, 2013. (AP / Marjorie Miller)

MEXICO CITY -- The number of Monarch butterflies making it to their winter refuge in Mexico dropped 59 per cent this year, falling to the lowest level since comparable record-keeping began 20 years ago, scientists reported Wednesday.

It was the third straight year of declines for the orange-and-black butterflies that migrate from the United States and Canada to spend the winter sheltering in mountaintop fir forests in central Mexico. Six of the last seven years have shown drops, and there are now only one-fifteenth as many butterflies as there were in 1997.

The decline in the Monarch population now marks a statistical long-term trend and can no longer be seen as a combination of yearly or seasonal events, the experts said.

But they differed on the possible causes.

Illegal logging in the reserve established in the Monarch wintering grounds was long thought to contribute, but such logging has been vastly reduced by increased protection, enforcement and alternative development programs in Mexico.

The World Wildlife Fund, one of the groups that sponsored the butterfly census, blamed climate conditions and agricultural practices, especially the use of pesticides that kill off the Monarchs' main food source, milkweed. The butterflies breed and live in the north in the summer, and migrate to Mexico in the winter.

"The decrease of Monarch butterflies ... probably is due to the negative effects of reduction in milkweed and extreme variation in the United States and Canada," the fund and its partner organizations said in a statement.

Omar Vidal, the World Wildlife Fund director in Mexico, said: "The conservation of the Monarch butterfly is a shared responsibility between Mexico, the United States and Canada. By protecting the reserves and having practically eliminated large-scale illegal logging, Mexico has done its part."

"It is now necessary for the United States and Canada to do their part and protect the butterflies' habitat in their territories," Vidal said.

Logging was once considered the main threat to the reserve, located west of Mexico City. At its peak in 2005, logging devastated as many as 461 hectares annually in the reserve, which covers 56,259-hectares. But a 2012 aerial survey showed almost no detectable logging, the first time that logging had not been found in detectable amounts since the mountaintop forests were declared a nature reserve in 2000.

The loss of milkweed in the Monarchs' summering areas in the north can make it hard for the butterflies to lay eggs, and for the offspring that do hatch to find enough food to grow to maturity. In addition, unusually hot or dry weather can kill eggs, meaning fewer adult butterflies. For butterflies that reach adulthood, unusual cold, lack of water or tree cover in Mexico can mean they're less likely to survive the winter.

Lincoln Brower, a leading entomologist at Sweet Briar College in Virginia, said in a statement that "the report of the dwindling Monarch butterfly winter residence in Mexico is ominous."

"This is not just the lowest population recorded in the 20 years for which we have records," Brower said. "It is the continuation of a statistically significant decrease in the Monarch population that began at least a decade ago."

However, Brower differed on whether small-scale logging, the diversion of water resources and other disruptive activity in the reserves in Mexico are playing a role in the decline.

"To blame the low numbers of monarchs solely on what is happening north of Mexico is misleading," Brower said. "Herbiciding of soybean and corn fields that kills milkweed is a serious problem, but the historical decline over the past 19 years has multiple causes."

"All three countries need to face up to the fact that it is our collective activities that are killing the migratory phenomenon of the Monarch butterfly," he said.

Homero Aridjis, a writer and environmentalist, said, "The decline in butterflies in the "Mexico) reserve is truly alarming."

Aridjis is from Contepec, a town in Michoacan state where Monarchs used to appear in the fall but don't show up anymore. Six other communities in and around the reserve that once had butterflies saw no detectable numbers this year. Aridjis cited a lack of control on tourists, crime in the area and small-scale logging as threats to the reserve.

The head of Mexico's nature reserves, Luis Fueyo, said there are still some problem to be solved at the wintering grounds in Mexico, including some scale-logging and water availability. The Monarchs don't drink any water throughout their long migration until the reach Mexico, and the mountain streams in the area have been affected by drought and human use.

The migration is an inherited trait. No butterfly lives to make the round-trip. The millions of Monarchs cluster so densely on tree boughs in the reserve that researchers don't count their individual numbers but rather measure the amount of forest they cover.

This winter, the butterflies covered just 1.19 hectares, down from 2.89 hectares last year.