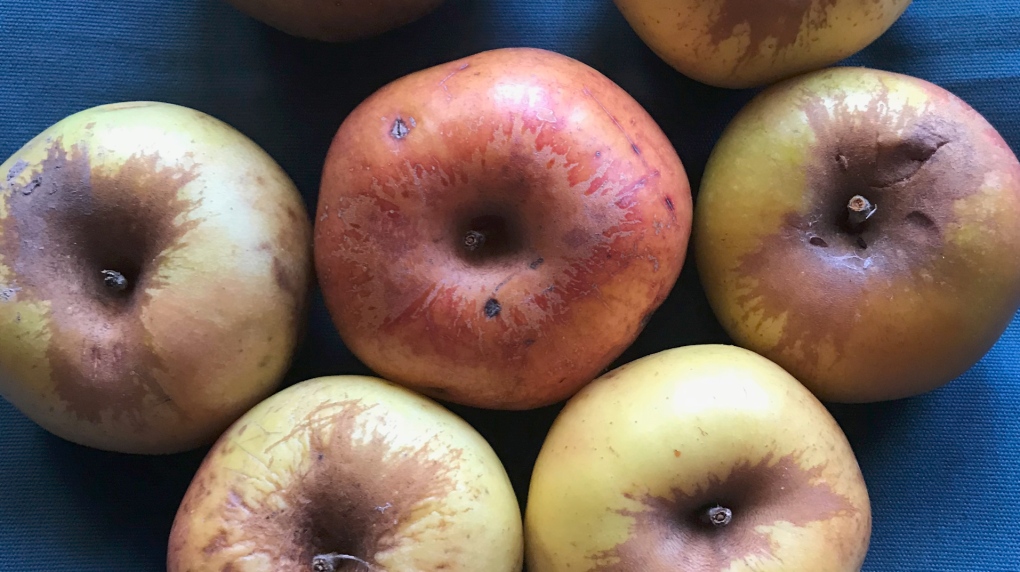 Researchers found a handful of firm apples on the ground below the Fremont County tree. They hoped the apples were of the Colorado Orange variety. (Montezuma Orchard Restoration Project)

On a crisp December afternoon, as the sun slowly fell behind the nearby Sawatch Range, Addie and Jude Schuenemeyer stared at a nearly dead tree, a few apples dangling off its last living branch.

"In that moment, I felt hope," recalls Addie.

But was this moment when the sun finally set on their nearly 20-year hunt for something many long believed was extinct?

'WE KNEW IT WAS SOMETHING UNUSUAL'

Growers will tell you Colorado is not the easiest place to grow fruit. The high altitude and extreme temperature fluctuations in spring and fall cause problems for farmers trying to grow apples, peaches, pears, cherries and plums in the Centennial State.

But, despite the thin air, late frosts, lack of rain and abundance of grasshoppers, fruit orchards have long adorned the valleys across the state.

"When many people were coming in to go after gold in the Pike's Peak gold rush in the late 1800s, other people realized those miners and those folks would need to be fed," explains Jude, Addie's husband and her Montezuma Orchard Restoration Project co-director. "People thought they were insane and laughed at them for thinking that you could even grow fruit here."

The couple created MORP after they purchased a nursery in 2001. Their mission: to create and preserve a genetic bank of Colorado heritage apples and reintroduce those varieties into current orchards.

"Preserving genetic diversity of the apple is historically important and provides a valuable resource to today's farmers and consumers," says Addie.

"These varieties represent a real economic opportunity for growers in rural Colorado to put orchards back in these historical areas and give them a chance to make a living on the legendary quality fruit that was once a hallmark for our state," adds Jude.

One of those fruits the Schuenemeyers hoped to preserve: the Colorado Orange apple.

"We first saw the Colorado Orange in a county fair. When we saw it, we knew it was something unusual," says Jude. "It had tremendous complexity to it. It was sweet but had the taste of tangy subtleties to go with the sweetness," the Schuenemeyers explained, though their assessment at the time was based solely on what they had read -- not what they'd tasted.

When industrial farming took root in the U.S. at the turn of the 20th century, the appetite for fewer apple varieties, grown in more favorable climates, increased.

"When the Red Delicious came out around 1900, it was just another apple," explains Jude. "By 1920, it became the dominant apple. It was a shiny red apple that grew pretty well everywhere. And even though other places couldn't grow as high a quality of Delicious as Colorado could, Colorado couldn't grow as many, especially since [the Red Delicious] is a little more frost sensitive."

"We've documented over 400 varieties of apples historically grown in Colorado, 50% are now considered lost," says Addie. "The Colorado Orange was one of these."

It's been long-believed the Colorado Orange apple was extinct.

GOING CRAZY TO FIND IT

In doing research to find apples grown in Colorado, Jude and Addie discovered the Colorado Orange in an old county fair record as having won several awards. But there was no indication where the apple originated. In the late 1800s, apples were grown all over the state ... from the Denver metro area, all the way to the state's far southwest corner in Montezuma County where the Schuenemeyers live.

They had no specific location to start looking.

"It took us a couple of years trying to realize what is, where it was, and then going crazy trying to find it," explains Jude.

Looking through state horticulture records, they eventually narrowed down that the variety was first planted in Fremont County, about a two-hour drive south of Denver.

Many trips to the county, visits with farmers and samples of possible Colorado Orange apple tree all ended in disappointment.

Then, in December of 2017, while returning samples taken of other trees to a man in Fremont County, he wanted to show the Schuenemeyers another tree in his orchard ... one that his father-in-law once told him was a Colorado Orange.

"This was the exact age and location of an orchard where we would expect to have a chance of finding this elusive apple," says Addie. "The apples looked the part: oblate, ribbed, yellow and orange in color, obviously a late winter apple. We realized the owner had taken us to the wrong tree before. This one just might be the one we were looking for."

The Schuenemeyers collected several apples hanging from, and lying around, that tree. Having experienced disappointment before, they were guarded in their excitement but moved to prove what they may have finally found.

The couple's next step was to dig into the U.S. Department of Agriculture's collection of pomological watercolors. Amongst its library of nearly 4,000 watercolor paintings of apples, the USDA had four depictions of Colorado Orange apples. The Schuenemeyers cut open their apples and compared them with the paintings. They were extremely similar.

DNA samples of the apples and tree were sent to horticulture scientists at the University of Minnesota to be compared against other apple varieties in their vast databank.

More than a year after they first saw the tree, the Schuenemeyers received the results: "unique, unknown." The apples they had found in Fremont County matched none of the thousands of apple genotypes in the scientists' DNA databank. It was good news.

"There was no control. They had no DNA for the Colorado Orange because it was believed to be extinct," says Jude.

But Jude and Addie were not ready to tell the world the extinct apple was not actually extinct. They needed more proof.

The day before the DNA results had arrived, Addie and Jude received an email from an archivist at Colorado State University in Fort Collins. She had the possible key to solving the Colorado Orange apple mystery.

"We became aware of a wax apple collection sitting in boxes in a retiring professor's office," says Linda Meyer, a CSU archivist. "And the apples had a listing with them. One of the apples listed was a Colorado Orange."

The Schuenemeyers knew this could be the moment for which they had long waited. "We were able to compare apples to apples," says Jude.

"98% sure, give or take 3%," says Addie. A nearly 20-year journey scouring the state, trying to find a small piece of Colorado history and prove it still existed, had finally paid off.

Nearly seven months passed before Jude and Addie could drive the eight hours from their home to Fort Collins to meet with Meyer.

They were eager to see the wax collection created in the early 1900s by Miriam Palmer, a former professor at the school. Palmer had been tasked by the school's agriculture department with making wax replicas of the state's popular, award-winning apples. Each apple was meticulously crafted, painted and marked with a number as a reference guide.

"She inscribed a very tiny number on the bottom side of each apple," explains Meyer. "She then made a card with that number, identifying the apple, which orchard it had come from, and the year she had collected it."

Amongst the collection of 83 apples the university found was #30 - Colorado Orange. Once the Schuenemeyers were able to compare the wax apple with real ones from the tree that December afternoon two years earlier, they could finally celebrate.

"The Colorado Orange is the greatest thing we've ever found," proclaims Jude.

AN APPLE WITH A STORY

Since their discovery, Jude and Addie have taken samples from the old tree and begun growing new Colorado Orange apple trees.

"We are the beneficiaries of the gift given to us from 150 years ago," says Jude. "But, it does us no good to be the only persons growing [the Colorado Orange apple]. Our steps now are to get it out to the people."

The Schuenemeyers say they have given some of their new trees to a half-dozen Colorado farmers to be planted and grafted in much larger orchards, with the hope that in the next five to 10 years, the Colorado Orange apple will appear in grocery stores, farmers markets and restaurants for consumers to enjoy.

"This apple has a story," says Steve Ela, a fourth-generation fruit grower in Hotchkiss, Colorado, who received some of the new Colorado Orange trees this spring. "You need to get people in the door and get them excited for the food. It's local, it's rare, and it grows late in the fall. That adds value."

With issues such as climate change and the global pandemic, Ela believes consumers are demanding more produce grown closer to their homes. And, he believes, if consumers are wanting to buy more Colorado apples, grocery stores will want more of what's growing in his orchards.

"This is a commodity market. We can't compete against China and Washington in terms of size," says Ela. "But there are people out there that really care about the taste of their food and relish something different. When we have something like [the Colorado Orange apple], we can compete because we're the only ones that have it."