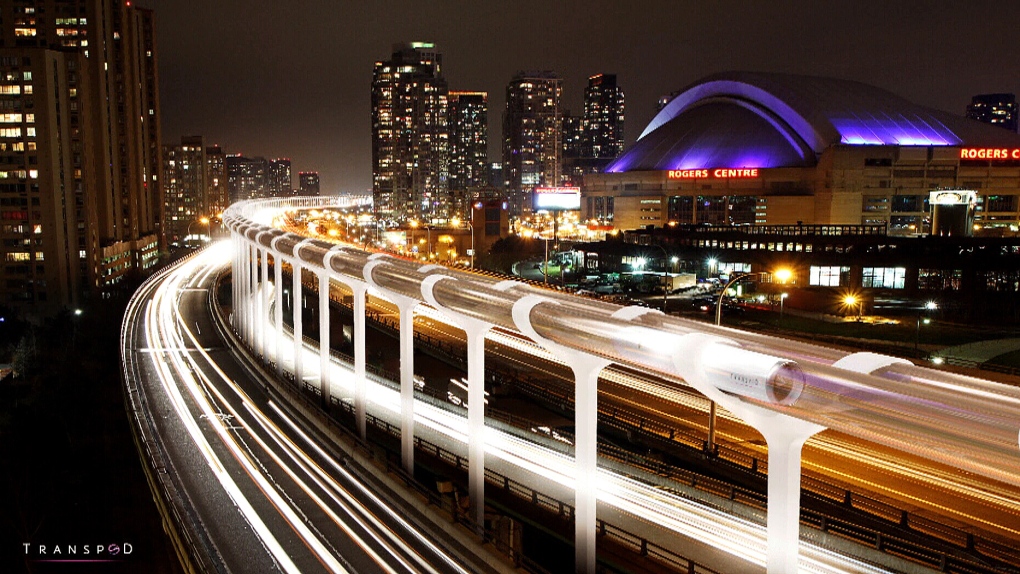 This rendering by TransPod Inc. shows their vision for a so-called Hyperloop tube running out of downtown Toronto.

A Canadian hyperloop company is threatening to relocate its headquarters to Europe unless it secures political support at home for its technology that would transport goods and passengers through tubes at airplane speeds.

"Unfortunately we didn't get the required support so we're starting the testing in France," Sebastien Gendron, co-founder and CEO of TransPod Inc. said in an interview from Europe.

He said it would be unfortunate if it had to move the company overseas to continue the development of a Canadian-made technology.

"If we wait until the risk is zero, fine, but the company may not be anymore in Canada," said Gendron who previously worked for Airbus SE and Bombardier Inc.

"They're telling us everyday that Canadians need to be bold, ambitious, take risk and develop innovation. So now it's time for execution."

TransPod's proposed elevated network of pods would travel through low-pressure tubes at 1,000 kilometres per hour.

That would cut transit time between Montreal and Toronto to 45 minutes and relieve highway and airport congestion. The line would cost $15 billion excluding land and accommodate 12 million passengers annually.

A second $6 billion line could connect Calgary and Edmonton in about 30 minutes.

Its Transportation 2030 initiative is working to modernize Canada's transportation sector through updated regulations, investments in infrastructure and the promotion of new transportation technologies, said a department spokeswoman.

"The speed at which the world is changing makes it necessary for the government to explore the impact that innovation and advanced technologies can have on our environment, our economy, and our society," she wrote in an email.

Gendron said the system could be ready to carry passengers in the early 2030s after first being used for light freight such as e-commerce and perishable food.

He said the transportation corridors would be privately owned, likely by Canadian pension funds, construction firms and other investors, while TransPod would supply the technology and pods.

The company said it has received interest from such partners but no formal commitments to date.

It has received US$15 million in seed funding from Italy and expects to close US$50 million in additional financial support by September.

The pods could be operated by airlines, passenger railways or freight transporters, said Gendron.

Via Rail, the crown corporation that operates passenger service across the country, said Thursday it is focusing strictly on existing public transportation technologies as part of its modernization program.

TransPod is also looking at installing its technology on several lines on the west side of France, connecting the European financial capitals of Paris and Frankfurt and in Saudi Arabia.

Founded in 2015, Toronto-based TransPod is competing against billionaires Elon Musk and Richard Branson, who are looking to build their own hyperloop networks.

However, Gendron said his company offers better technology and a lower cost per kilometre than its rivals or high-speed railways.

Construction of a three-kilometre track in Limoges, France, belonging to TransPod and its investors is expected to be ready for testing by next June. Pods would travel at more than 600 km/h to beat the high-speed rail record.

A 10-km test track along Highway 7 in Alberta could be ready by 2022 if it wins provincial support. Construction would begin in 2020 and form a section of the eventual transportation corridor.

The province is ready to work with the company on its proposed full-scale test track, said a spokesman for Alberta Economic Development and Trade Minister Deron Bilous.

"We are looking for more information from TransPod regarding their proposal, and are prepared to assist them with finding a safe and appropriate location for the project in our province," said Jean-Marc Prevost.

Canadian and European hyperloop companies are developing an international partnership to standardize the methodology and framework to regulate the travel systems so time isn't wasted in meeting government requirements for certification.

"The same way that we had the steam train, the diesel train and high-speed train, now we need to establish all the standards for vacuum train systems."