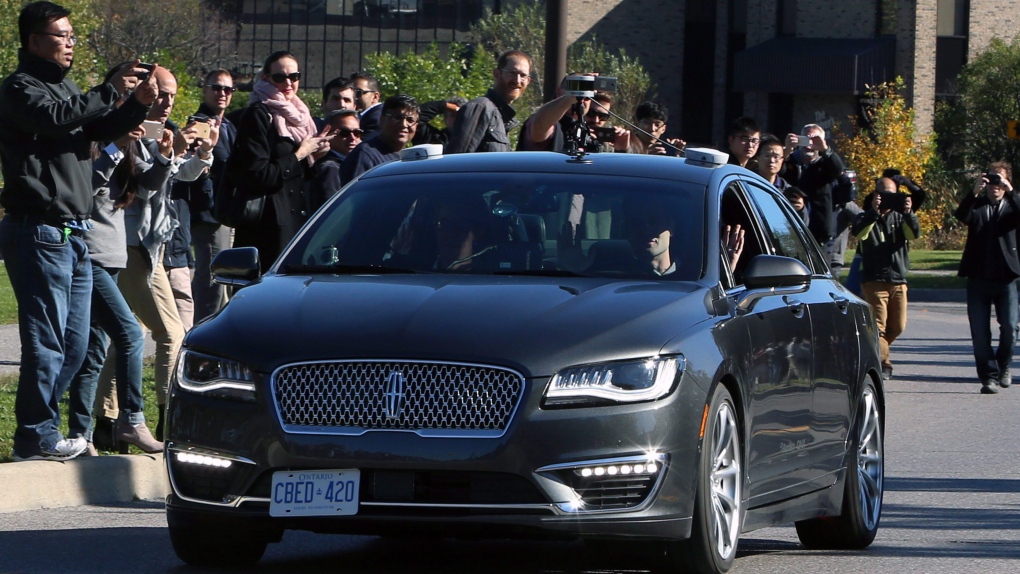 People watch as an autonomous car drives down an Ottawa street as the City of Ottawa and Blackberry QNX demonstrate the vehicle, Thursday, October 12, 2017, in Ottawa. (THE CANADIAN PRESS/Fred Chartrand)

OTTAWA -- A BlackBerry QNX-equipped self-driving car hit the road in suburban Ottawa Thursday in what was billed as the first on-street test of an autonomous vehicle in Canada.

"Today is the first public fruits of what we've been doing," Wall said.

The street was closed for the public demonstration, which attracted scores of people, but the car is expected to be operating on city streets in the test area amidst real traffic and pedestrians.

To aid in the demonstration, the test loop around the suburban technology park has been upgraded with traffic lights equipped with transmitters that communicate with the car as well as repainted street lines and new LED street lights.

BlackBerry QNX is developing the software foundation for autonomous vehicles, while Wall said others are working on what he called "the brain."

"We're going to provide all the infrastructure, the security, the safety, the redundancy, the communication, how the signals come in."

Wall said fully autonomous cars without a steering wheel are still a long way off, but he added that cars are already incorporating some of the technology such as sensors that will keep your car in its lane, hit the brake if they think you are going to hit something or detect another car in your blind spot.

Automotive and technology companies around the world have been racing to develop self-driving systems.

A demonstration test zone has been announced for Stratford, Ont., as part of the Ontario government's plan to create an Autonomous Vehicle Innovation Network, with the help of $80 million over five years.

Canadian auto parts firm Magna International Inc. (TSX:MG) announced earlier this week that it would join BMW and Intel Corp. to develop a self-driving system for the global vehicle marketplace by 2021.

Several companies including Uber and Waymo, which was spun out of Google's parent company, Alphabet Inc. last year, have been testing self-driving cars on city streets in the United States.

BlackBerry QNX has been a supplier of software platforms to the auto industry for 20 years including telematics, infotainment, acoustics, and instrument cluster systems.