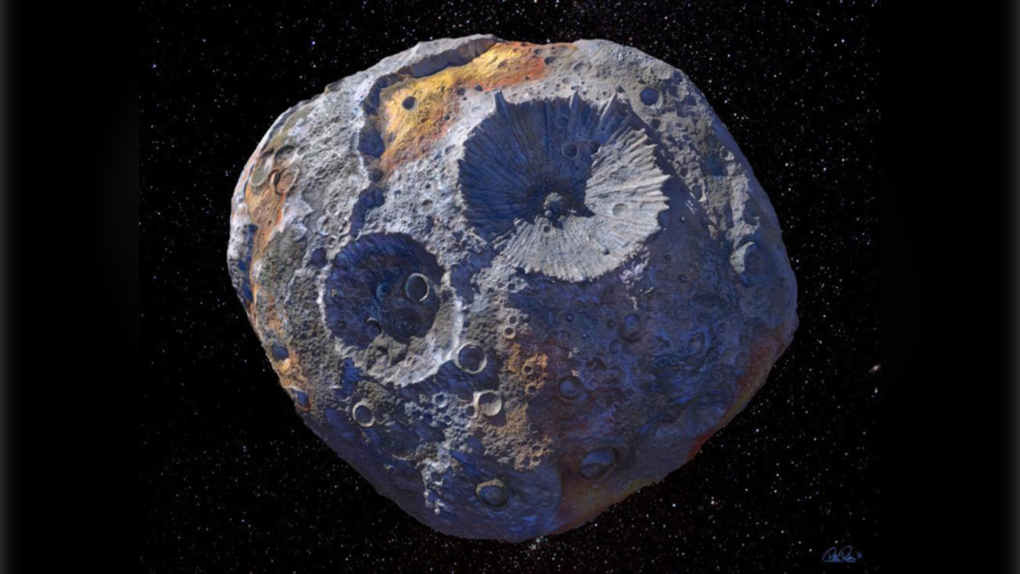 The massive asteroid 16 Psyche, shown here in an artist's rendering, is the subject of a new study by SwRI scientist Tracy Becker, who observed the object at ultraviolet wavelengths. (Courtesy of Maxar/ASU/P. Rubin/NASA/JPL-Caltech)

TORONTO -- New images from the Hubble Space Telescope have given scientists a closer look at one of the largest and most intriguing asteroids floating around the solar system – one that is thought to consist of metal estimated to be worth more than the entire global economy.

The gigantic asteroid, called 16 Psyche, is approximately 225 kilometres in diameter and orbits between Jupiter and Mars in the main asteroid belt. It’s of particular interest to scientists because, unlike most other asteroids that are rocky or icy, this one appears to be largely made up of metallic iron and nickel.

According to NASA, 16 Psyche may be the exposed core of an early planet – possibly as large as Mars – that lost its outer layers in violent collisions billions of years ago.

“Through some exciting collisions in its past, the mantle and the crust were stripped away, leaving bare this exposed, metallic core,” Tracy Becker, who led the study to examine the asteroid with the Hubble Space Telescope, told CTVNews.ca.

Becker, a planetary scientist at the Southwest Research Institute in Texas, said that 16 Psyche might have been a protoplanet – a planet that has not yet fully formed – and that by studying it, scientists might be able to learn more about the Earth’s own core.

“If we can study the asteroid, we could potentially learn a little bit about Earth in the sense of having direct access to a planetary core, which we can never do here on Earth is see our own core,” she explained in a telephone interview on Thursday.

While astronomers have known about 16 Psyche’s existence for some years, they had never taken such a close look at it until Becker and her team used the Hubble Space Telescope to observe its surface at ultraviolet (UV) wavelengths.

“The way it reflects light in ultraviolet could tell us, potentially, about its metal content and any other materials that we might see on the surface,” Becker said.

The scientists studied 16 Psyche at two specific points in its rotation in order to view both sides of the asteroid in great detail.

Becker says the telescope scans led to two major findings that were published in The Planetary Science Journal this week.

The first was observing UV light reflecting off 16 Psyche in similar way to how it’s reflected off metallic meteorites or a slab of iron.

“We confirmed that in the UV, it does look like it has metal on the surface,” she said.

However, their second observation called into question just how much metal is actually there. Based on their computer modelling, Becker said they determined that even a small presence of iron could dominate their UV observations.

“You can imagine, just like sprinkling a little bit of iron with other materials, and it would look very kind of iron-like in the way it reflected,” she said. “It doesn’t mean that it isn’t 100 per cent iron, it just means it could be as little as only 10 per cent.”

Despite this inconclusive data, Becker said they discovered that the asteroid actually brightened when they looked at it at deeper UV wavelengths. She said this could be an indication of some sort of “processing” on its surface from solar weathering.

“When we’ve seen this brightening in the deep UV before, it's indicated to us that it could be processing due to things like the solar wind, which are just the charged particles coming from the sun and hitting that surface over the millions or even billions of years that it may have been exposed for,” she said.

While further research is needed, Becker said the processing could provide insight into the age and formation of the asteroid.

Becker said they conducted the study in order to get a better picture of 16 Psyche before NASA sends an unmanned spacecraft on a SpaceX Falcon Heavy rocket to study the asteroid in 2022.

According to NASA, the “mission’s goal is, among other things, to determine whether Psyche is indeed the core of a planet-size object.”

Becker said she’s excited to see what the mission uncovers because if 16 Psyche is, indeed, a “big piece of metal,” they’re going to learn a lot about the Earth’s core and how the core of all planets in the solar system are formed.

“Even if it turns out that it's not very in high metal content and it is a little bit more rocky than initially thought, it's still going to tell us a lot about how these kinds of objects can form in the solar system and how they've changed, how they evolved, and how they’ve had collisions and things like that,” she said.

The asteroid’s composition has been a subject of great curiosity among scientists who even estimated its iron contents could be worth $10,000 quadrillion back in 2017. That’s such a big number it’s hard to conceive, but suffice to say it’s substantially larger than the $90 trillion worth of the global economy in 2019.

No matter its worth, Becker said we don’t have the technology to even think about a mission to bring pieces of it back to Earth.

“I think it would cost probably more to get there and get a piece and bring it back then than a small piece might be worth,” she said with a laugh.

“For me, the worth is really in the science that we can get out of studying it.”