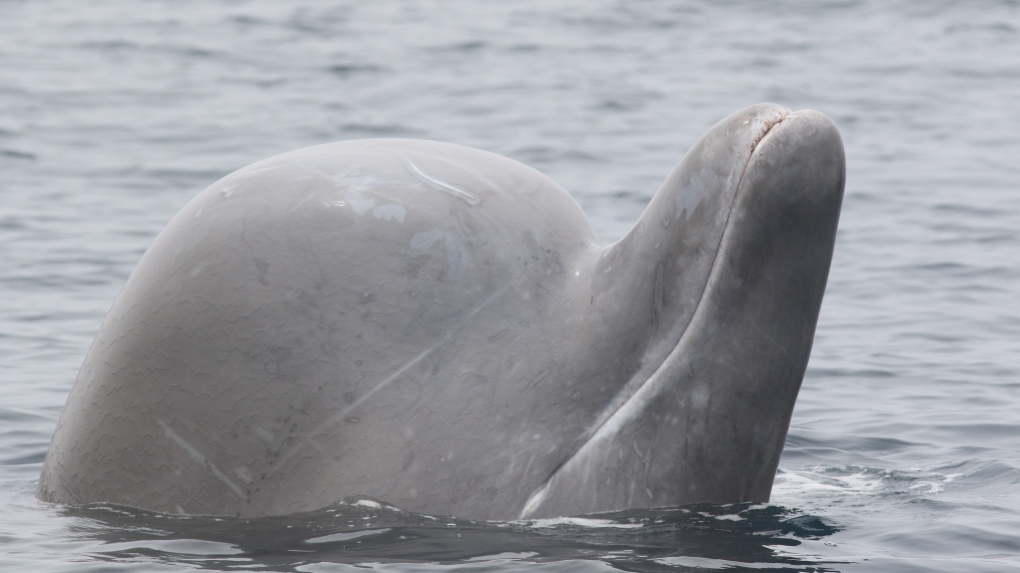 A Northern bottlenose whale with small emergent teeth showing is shown in a handout photo. The walnut-sized teeth taken from northern bottlenose whales slaughtered in the 1960s and 70s are proving to be storehouses of knowledge that raise awareness about the fragile future of the endangered species. (THE CANADIAN PRESS/HO-Laura Feyrer/Northern Bottlenose Whale Project)

HALIFAX -- The walnut-sized teeth taken from northern bottlenose whales slaughtered in the 1960s and 70s are proving to be storehouses of knowledge that raise awareness about the fragile future of the endangered species.

Dalhousie University researcher Laura Feyrer found she and other researchers could only observe the elusive mammals from rare sightings far off the coast of Nova Scotia, when their distinctive bulbous foreheads and beak-like mouths occasionally emerged from their deep dives.

It wasn't sufficient to properly observe the whales' behaviour, or to enhance the scant knowledge of their life patterns.

But Feyrer and her collaborators came up with a technique to probe the life stories of the whales through a box of teeth taken from the animals by whalers off the coast of Labrador and Iceland, and retained by scientists at the Norwegian Institute of Marine Research for future study.

Using a small drill, the researchers selectively extracted samples of the tooth's dentin that is deposited in annual growth layers, like tree rings, indicating what the animals were eating when they were alive.

The results published this week in the journal PLOS ONE showed the whales were nursing an average of three to four years before breaking away from their mothers.

That meant the whales' ability to reproduce was much slower than previously thought, altering scientific understanding of their vulnerability to human impacts on their population.

"What I was able to see from their stable isotope profiles of their teeth was ... on average, they were still nursing at age three. So that's an extra two years more than what was previously used to build reproduction models."

The lead author said this helps assess the species' ability to rebound from disease, or mass stranding events that can occur due to mid-frequency sonar from naval ships.

She said this could means that naval forces or seismic research vessels probing for oil and gas can use this added knowledge to assess their potential impact on the whales.

"It'll give them more information with which to judge the risk of an activity."

The population of the bottlenose whales that inhabit the Scotian shelf off Nova Scotia were listed as endangered under the federal Species at Risk Act in 2006.

At the time, it was noted that threats to this species included acoustic disturbance, oil and gas activities, entanglement in fishing gear, contaminants, changes to food supply, and vessel strikes.

The story of how the innovative research method occurred is one of those moments of scientific serendipity which combined good fortune, collaboration and ingenuity.

When Feyrer began her doctoral work in 2015, she was primarily interested in doing genetic analysis by looking at the preserved gum material of the northern bottlenose whale.

The lab had a collection of the cone-shaped teeth in a large box provided by the Norwegian researchers who had preserved them after their harvest.

A scrap of paper, spotted in the container, helped change Feyrer's approach.

"We were given this box of teeth by a previous collaborator in the lab and there was a little note in there written by a previous post-doctoral student that said, 'stable isotope analysis?"' recalled the biologist.

The biologist started to wonder if a mass spectrometer could be used to analyse the stable isotopes of nitrogen or carbon, potentially giving her key information on the food the animals ate.

She then found a collaborator who'd done similar work with another whales' teeth, and who could help with the method.

"I discovered my collaborator Corey Matthews, who is with the Arctic federal Fisheries Department, who had published a paper looking at the annual rings in beluga teeth and had discovered their weaning age," she said.

Beaked whales only have two teeth, and in the females they remain embedded in the gums during their lives, but each of them is a life record.

"They're not much to look at, but they're a real treasure trove of information," said Feyrer.

As she works with the teeth, the researcher said she feels sadness as she recalls the way the animals were slaughtered, but she said the team's work is attempting to turn the tragedy into useful knowledge.

"We owe it to these animals that were sacrificed to learn as much about them as we can."