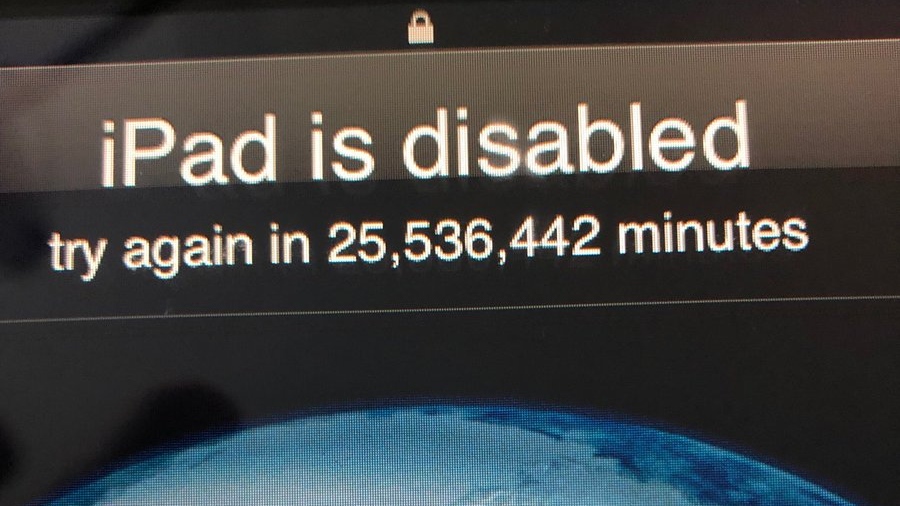 A father in Washington, D.C., was locked out of his iPad for more than 25 million minutes after his 3-year-old repeatedly tried to gain access without the correct code. (Twitter/eosnos)

A man in Washington, D.C., was locked out of his iPad for more than 25 million minutes, or 48 years, after his 3-year-old tried to use it.

Evan Osnos, a writer with The New Yorker magazine, shared an image on social media Saturday, showing the screen of his locked-out tablet.

“Reboot your 3 y.o.,” joked a user. “I would just wait it out,” suggested one man. “Pour one out in memory of your iPad,” said another user.

Some on Twitter suggested there was nothing he could do, but others came forward with helpful links to tech blogs explaining how he might resolve the issue.

It starts with a 30-second warning, and goes up incrementally from there. “Five minutes, 10 mins, an hour. Then after the hour it’s like a crazy 365,000 minutes,” says Wolanczyk. “I don’t think anyone is going to want to wait 87 years to enter their password again.”

The only answer, says Wolanczyk, is to reset your iPad or iPhone using iTunes. This may require a hard reset of the device after which you will lose data. According to Apple’s website, if you had backed up the device on iTunes, you can restore it. But if not, you’ll have to accept a clean slate.

“If you never backed up your device before you forgot your passcode, you won't be able to save your device’s data,” reads the Apple support site.

Osnos has not followed up on Twitter about the state of his iPad.