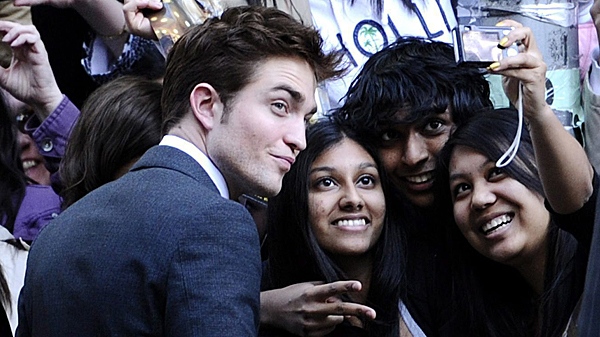 Actor Robert Pattinson takes pictures with fans at the premiere of "Water For Elephants" at the Ziegfeld Theater on Sunday, April 17, 2011, in New York. (THE CANADIAN PRESS/AP-Peter Kramer)

Robert Pattinson took a fan out to dinner -- because he was "chronically bored."

The 25-year-old actor was filming 2008 Salvador Dali biopic "Little Ashes" in Spain and after being followed by a female admirer for several weeks, he asked her to spend the evening with him -- and was shocked never to see her again afterwards.

He revealed: "I was playing Salvador Dali in Spain and there was this one girl waiting outside my apartment every day for about three weeks. There was one day when I was just so chronically bored I said to her, 'Do you want to just go to dinner or something?? No one else wants to hang out with me.'

"Her parents had a restaurant, she took me there I complained about everything in my life for about two hours, then she gave me the bill to pay and was never back outside my apartment ever again."

Robert -- who is dating his "Twilight Saga" co-star Kristen Stewart -- sometimes attempts to disguise himself when he goes out, but admits he doesn't do it very well.

He said: "I attempt to (disguise myself) - it doesn't particularly work ever. I started off just trying to make strange expressions, but that's not a particularly good tactic. You try and get little tics and things. You try and draw attention to the wrong part of your body, but that doesn't really work at all. The best disguise is repellent."

When he does get recognized, the British star doesn't mind as the recognition is like "job security."

He explained to TV talk show host David Letterman: "It definitely feels like job security, in a funny sort of way, if you've been avoiding it for a while and you suddenly go out and people are still screaming. Whew."