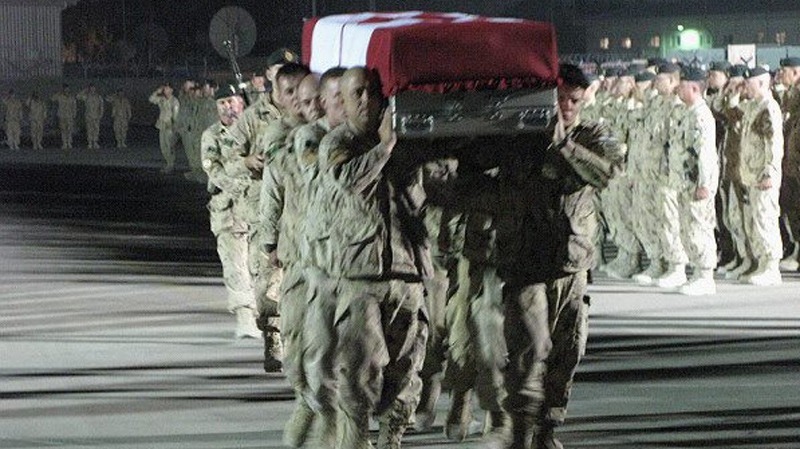 Soldiers carry the casket of Sapper Brian Collier during a ramp ceremony at Kandahar Airfield in Afghanistan on Wednesday July 21, 2010. (Bill Graveland / THE CANADIAN PRESS)

It's become a familiar sight: hundreds of NATO troops standing quietly, silhouettes in the night -- a time chosen not only to avoid the scorching daytime heat but to minimize the risk of insurgent attack during the summer fighting season.

Collier, 24, who had escaped death once after an encounter with an improvised explosive device on his current tour of Afghanistan, lost his life Tuesday.

He was out of his vehicle on a foot patrol in the village of Nakhonay, 15 kilometres southwest of Kandahar city, when he was killed by an IED blast.

His commanding officer, a fellow combat engineer, disclosed some details about Collier's earlier brush with death on June 6.

"There was an explosion that led to the death of Sgt. Martin Goudreault, and Sapper Collier took command of that situation," said an emotional Maj. Jim Smith. "He was only metres away from that blast and he was thrown to the ground with damage to his hearing and he was knocked unconscious."

"But regardless of his injuries, he ... took command of the situation, telling those who were nearby to stay still as he cleared a lane to Sgt. Goudreau so the first responders could react," he added.

"He is one of those guys that we all admire," Smith said. "He was absolutely selfless. He put his friends and those section mates first -- a true hero."

Some 1,500 Canadian, Dutch, American and British troops marched smartly onto the tarmac, then stood at rigid attention while the light armoured vehicle transporting Collier's body slowly made its way onto the airfield.

Spotlights on the runway lit up a narrow pathway for the guard of honour, to the familiar skirl of bagpipes. The casket -- shrouded, as always, in a Canadian flag -- was carried to a waiting military transport plane by eight of Collier's fellow soldiers.

The Panjwaii district, in which Nakhonay is located, has long been a thorn in the side of the Canadian soldiers in Kandahar province. Countless operations have taken place in Panjwaii, but the Taliban have returned after the Canadians left.

The region remains something of a Taliban refuge, with mud-walled compounds, grape orchards and vast fields of marijuana and poppies offering abundant hiding places -- both for foot soldiers and for the IED-making operations.

On hand to pay tribute at the ramp ceremony were Defence Minister Peter MacKay and Gen. Walter Natynczyk, the chief of defence staff. They were visiting Kandahar Airfield.

"I want to express our sincere condolences and our respects to the family of Sapper Brian Collier who gave his life bravely in Afghanistan for a cause that he and we in the Canadian Forces and Canadians believe in very strongly," MacKay told reporters.

"We are thinking of his parents and his comrades. We had a chance to pay our respects to him a short while ago."

In a statement released by the military, the Collier family said:

"We are thankful for all of the support that our family has received over the past few days. We are deeply saddened by the loss of our young son, brother and great friend. He lived and died as a hero, and will always be in our hearts."

"At this time it would be greatly appreciated if all could respect the privacy of the family at this point in time."

Collier was born in Toronto and raised in Bradford, Ont.

A member of 1 Combat Engineer Regiment based at CFB Edmonton, he was serving in Afghanistan with the 1st Battalion, The Royal Canadian Regiment Battle Group. It was his first deployment to Afghanistan.

The latest death brings to 151 the total number of Canadian military personnel who have died as part of the Afghan mission since it began in 2002.

IEDs have been the single biggest cause of death among Canadian troops in Afghanistan.

Eleven out of the 13 Canadian deaths this year were the result of an IED blast. In all, 92 of the 151 Canadian fatalities in the eight-year-old Afghan mission came about from IEDs -- which include roadside bombs and some other type of explosives, according to the Department of Defence.