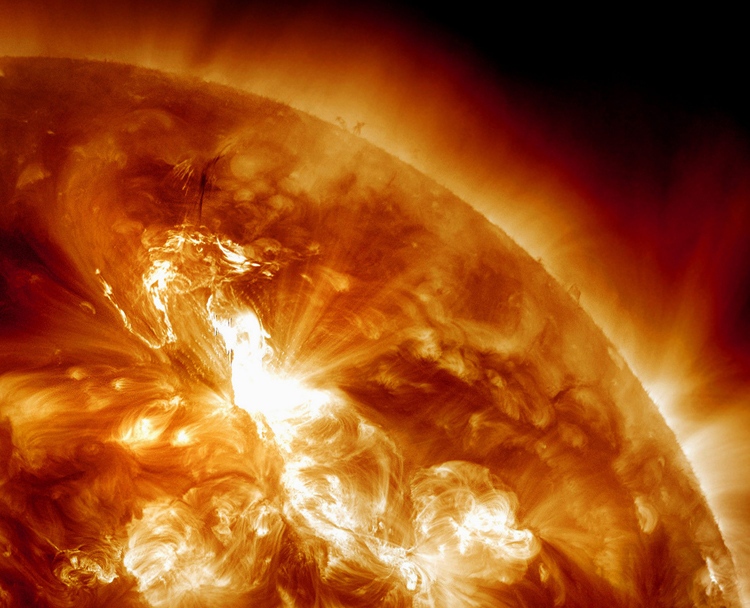 WASHINGTON - The sun is bombarding Earth with radiation from the biggest solar storm in more than six years with more to come from the fast-moving eruption.

The solar flare occurred at about 11 p.m. EST (0400 GMT) Sunday and will hit Earth with three different effects at three different times. The biggest issue is radiation, according to the National Oceanic and Atmospheric Administration's Space Weather Prediction Center in Colorado.

The radiation is mostly a concern for satellite disruptions and astronauts in space. It can cause communication problems for polar-travelling airplanes, said space weather centre physicist Doug Biesecker.

Radiation from Sunday's flare arrived at Earth an hour later and will likely continue through Wednesday. Levels are considered strong but other storms have been more severe. There are two higher levels of radiation on NOAA's storm scale -- severe and extreme -- Biesecker said. Still, this storm is the strongest for radiation since May 2005.

The radiation -- in the form of protons -- came flying out of the sun at 93 million miles per hour. (150 million kph)

"The whole volume of space between here and Jupiter is just filled with protons and you just don't get rid of them like that," Biesecker said. That's why the effects will stick around for a couple days.

NASA's flight surgeons and solar experts examined the solar flare's expected effects and decided that the six astronauts on the International Space Station do not have to do anything to protect themselves from the radiation, spokesman Rob Navias said.

A solar eruption is followed by a one-two-three punch, said Antti Pulkkinen, a physicist at NASA's Goddard Space Flight Center in Maryland and Catholic University.

First comes electromagnetic radiation, followed by radiation in the form of protons.

It's the plasma that causes much of the noticeable problems on Earth, such as electrical grid outages. In 1989, a solar storm caused a massive blackout in Quebec. It can also pull the northern lights farther south.

But this coronal mass ejection seems likely to be only moderate, with a chance for becoming strong, Biesecker said. The worst of the storm is likely to go north of Earth.

And unlike last October, when a freak solar storm caused auroras to be seen as far south as could see an aurora but not until Tuesday evening, he said.

For the past several years the sun had been quiet, almost too quiet. Part of that was the normal calm part of the sun's 11-year cycle of activity. Last year, scientists started to speculate that the sun was going into an unusually quiet cycle that seems to happen maybe once a century or so.

Now that super-quiet cycle does not seem as likely, Biesecker said.

Scientists watching the sun with a new NASA satellite launched in 2010 -- during the sun's quiet period -- are excited.

"We haven't had anything like this for a number of years," Pulkkinen said. "It's kind of special."