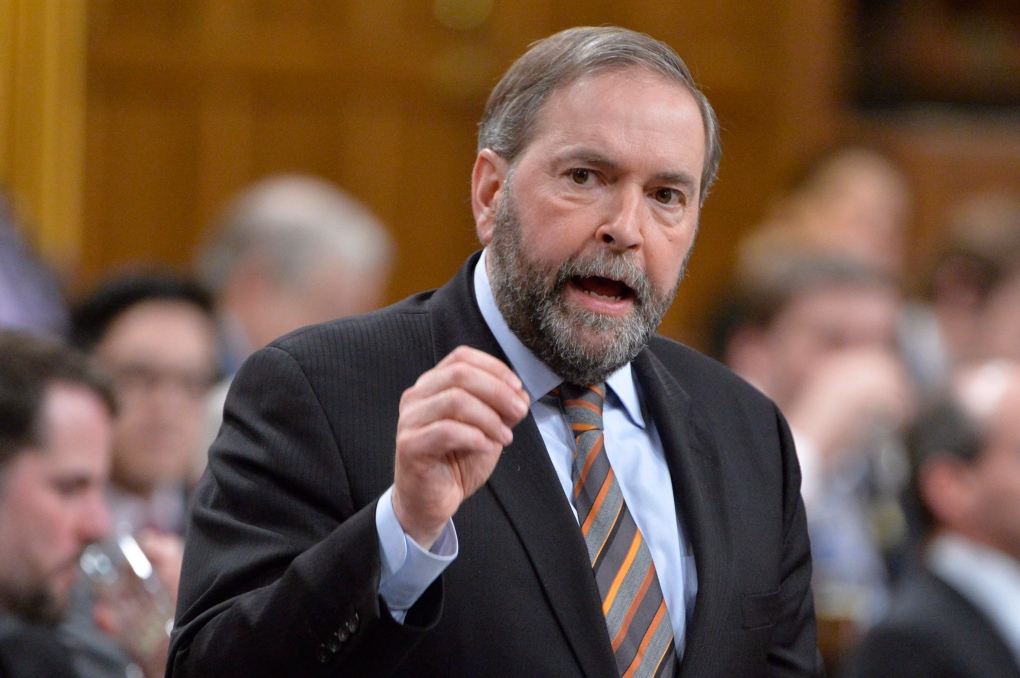 NDP leader Tom Mulcair rises during question period in the House of Commons on Parliament Hill in Otttawa on Wednesday April 9, 2014. (Adrian Wyld / THE CANADIAN PRESS)

HALIFAX -- NDP Leader Tom Mulcair says with 18 months to go before the next election, he's focusing his party's sights on the federal government's Election Act overhaul, saying the hotly debated legislation should receive more scrutiny because it could undermine the rules of democracy.

Mulcair, in Halifax on Saturday for a provincial NDP convention, said the governing Conservatives are more interested in restricting the right to vote than giving people something to vote for.

"We're going to do everything we can to stop this thing," he told 250 delegates gathered at Halifax-area hotel. "The pundits said it was too complicated for Canadians to understand. But we know that it's about the fundamental rules of democracy."

He said Canadians are taking notice of the NDP's bid to thwart passage of Bill C-23, the Fair Elections Act, saying several people approached him at a local market in Dartmouth to discuss the legislation.

"Lots of people came up to me and spontaneously talked to me about the unfair Elections Act," he said. "That's a good sign. That means the message is getting through."

The Conservatives have argued the proposed law is aimed at reducing electoral fraud, but Mulcair argued it will remove Elections Canada's ability to investigate problems.

He said students, the elderly and aboriginals will find it particularly difficult to vote if the bill's more restrictive voter-identity rules are adopted.

"Stephen Harper is trying to load the dice between now and the next election in his own favour," Mulcair said after his speech. "Never before in the history of Canada has a government tried to use its majority to unilaterally change Canada's election laws with no support from any political party."

The minister responsible for democratic reform, Pierre Poilievre, could not be immediately reached for comment Saturday.

Mulcair also cited widespread criticism of the bill by electoral experts and former auditor general Sheila Fraser, adding that he was stunned by a comment posted last week on Twitter by Conservative senator Linda Frum.

The tweet, posted April 9, said: "Elections Canada should not have a vested interest in recording a high voter turnout. That's a conflict." Frum followed up with: "Elections Canada role is to administer fair elections. Not to motivate. Not to induce."

Frum's comments stem from a controversial section of the bill that would prohibit Elections Canada from encouraging people to vote, a measure the government says is intended to put the onus on political parties rather than bureaucrats.

Mulcair drew a round of laughs from the partisan crowd by saying: "In this case, we can summarize by saying the root word of twitter is twit. You can't make this stuff up."

In his campaign-style speech, Mulcair also suggested the Conservatives have been mired in scandal and mismanagement.

Mulcair also continued with his attacks on Justin Trudeau for the second weekend in a row, describing the Liberal leader as an elitist out of touch with middle-class Canadians.

"The problem is that Justin Trudeau will never know what middle class means," Mulcair said. "He doesn't understand the real challenges that families are facing."