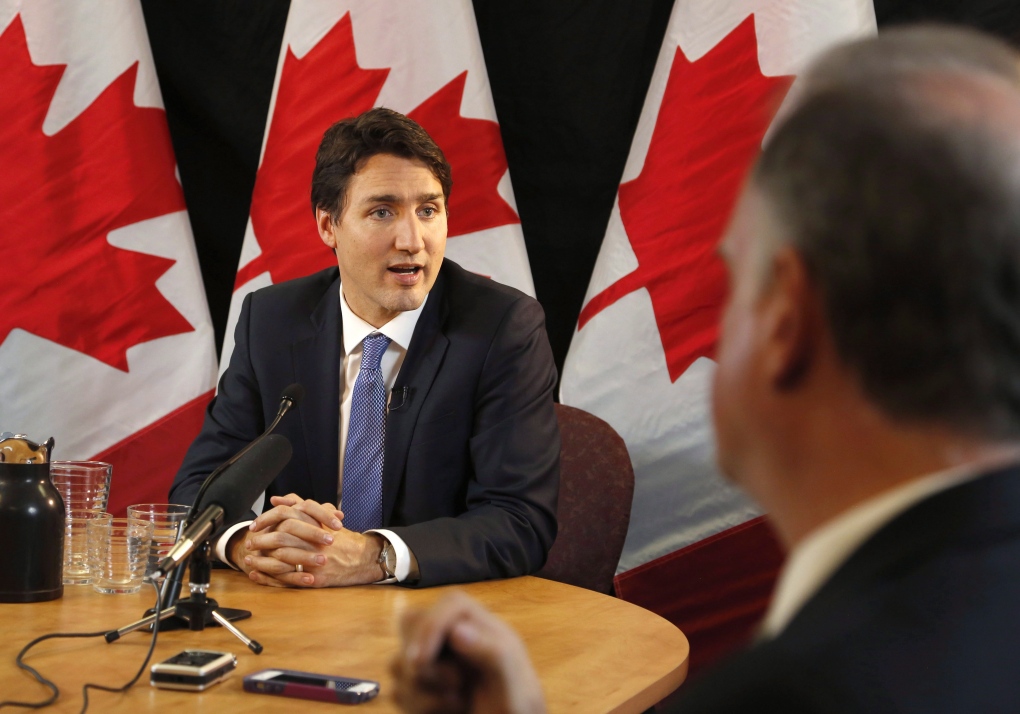 Prime Minister Justin Trudeau speaks with reporters during an interview with The Canadian Press in Ottawa on Wednesday, Dec. 16, 2015. (Patrick Doyle / THE CANADIAN PRESS)

OTTAWA -- Justin Trudeau may want to bring Canada back to the world as an international player but the prime minister will likely have to win another election before the country returns to one of the globe's most powerful tables.

Trudeau all but ruled out a return for Canada to the powerful United Nations Security Council any time before 2019 during a roundtable interview with The Canadian Press this past week.

Canada's historic loss of a seat on the council in 2010 to tiny Portugal has been often cited as one of the major foreign policy failings of the previous Conservative government, which at times viewed the UN with disdain.

Trudeau has made Canada's reengagement with the UN and other global multilateral organizations a core aspect of his foreign policy.

Trudeau acknowledged what senior bureaucrats told his new government after it won power in October: that it is unlikely Canada would be in a position to vie for a temporary two-year seat until sometime early in the next decade.

That's because other western European countries in the UN group to which Canada belongs have declared their intentions to run, effectively filling up the ballot up to 2020 and beyond.

"Yes, getting back onto the Security Council would be nice. And we're obviously aware of challenges around timing on that," Trudeau said.

"But it's not the only way that one can make a difference in the UN. There is a need for Canada to engage across a broad range of issues, and that's exactly what we're going to do."

Trudeau cited a renewed commitment to peacekeeping and climate change as two areas where Canada can work within the UN to be a constructive player.

He also said Canada has many avenues to pursue engagement with the permanent members of the council, including China and "even Russia if we wanted to."

The Security Council has faced heavy criticism in recent years because it has been powerless to stop the civil war that has killed 300,000 people in Syria since 2011 because Russia -- one of the five permanent, veto-wielding members -- has consistently blocked concrete action against a country it considers an ally.

But on Friday, the council displayed rare unanimity when it endorsed a roadmap for a negotiated peace in Syria that involves government and opposition groups.

But in a separate interview with The Canadian Press, he acknowledged that Canada's return to the Security Council is still many years off.

"If you look at those countries that have declared going forward, it does limit the opportunities. But we've served on it several times in the past, and we look forward to serving on it again," he said.

Canada last served on the council in 1999-2000, its sixth term, dating back to the late 1940s. Ordinarily, said Grant, the campaigning for the next seat would have started after its most recently completed term.

But the Conservatives abandoned all campaigning for the council after the 2010 loss.

Like Trudeau, Grant said Canada has renewed its engagement in other UN forums. Canada recently joined a working group on international aboriginal issues, and will do more to support UN peacekeeping efforts -- another foreign policy priority of Trudeau's.

Canada's contribution to UN missions has dropped off dramatically to a few dozen actual boots on the ground compared with thousands of troops in the 1990s. Grant said Canada remains the ninth largest contributor to peace operations.

Its future contributions of personnel would be mainly specialized military experts, not massive deployments of troops, he said.

Trudeau said he expects developing countries to continue to provide "the infantry troops, the basic bodies" of large peace keeping missions, but his goal is for Canada to add value.

"Canada actually has specific skills that many of the countries that are doing peacekeeping don't necessarily have, whether it's engineer corps, whether it's medical, whether it's officers and bilingualism or even French speaking," said Trudeau.

Trudeau promised during the federal campaign that Canada would sign the UN Arms Trade Treaty. All of Canada's NATO allies, including the U.S. have signed on to the treaty that went into force in December 2014.

That means Canada has now missed its opportunity to simply join the treaty. Now Canada must essentially apply to join, only after undertaking a legislative or regulatory review to ensure there are no roadblocks in our domestic law, said Grant.

"Our colleagues in Ottawa are looking at it," said Grant. "It will take a little bit of time."

Meanwhile, Grant is getting lots of positive feedback from fellow UN ambassadors about Canada's future, particularly Trudeau's decision to appoint an equal number of men and women to cabinet.

"This has resonated throughout the UN system, and I think that's a very positive message that's being sent," Grant said. "Gender and equality has really been top of mind for everyone in the UN system."