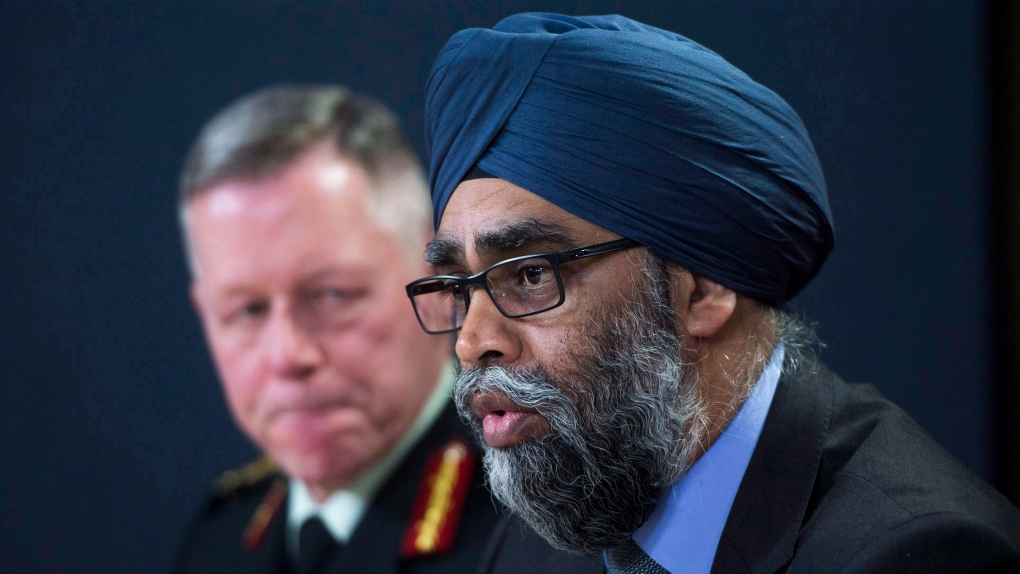 Defence Minister Harjit Sajjan speaks at an announcement on fighter jets as General Jonathan Vance, Chief of the Defence Staff (left) looks on at the National Press Theatre in Ottawa on Tuesday, Dec. 12, 2017. (THE CANADIAN PRESS / Sean Kilpatrick)

OTTAWA -- Defence Minister Harjit Sajjan has come out in support of Canada's top military general, saying the country is "very fortunate" to have someone like Gen. Jonathan Vance leading the Canadian Armed Forces.

The comments come amid questions over whether the newly re-elected Liberal government plans to replace Vance, who was first appointed chief of the defence staff by Stephen Harper and is now in his fifth year in the position.

"When it comes to the chief of defence staff, this is a decision for the prime minister and so we'll reflect on that and make a decision accordingly," Sajjan told The Canadian Press during a wide-ranging interview last week.

However, he added, "Canada has been very fortunate to have somebody like Gen. Vance in this role at a very important time."

Vance is already one of the longest-serving defence chiefs in Canadian history, and his lengthy tenure has coincided with a number of significant decisions and developments for the Armed Forces - both positive and negative.

Those include significant new investments in the military through a new defence policy, the deployment of troops to Iraq, Mali and Latvia as well as efforts to crackdown on sexual misconduct and recruit more women.

Yet he has also faced his share of criticism over the years, including over his decision to suspend Mark Norman in 2017, more than a year before the now-retired vice-admiral was charged with breach of trust. The case was eventually dropped.

Vance also found himself under fire for the way he handled replacing Norman as the military's second-in-command last year, which saw significant upheaval and instability in the Armed Forces' senior ranks.

The defence chief has also been accused of being too supportive of controversial decisions by the Liberal government such as its plan to buy interim fighter jets while some in the Forces have grumbled about a domineering style.

While he wouldn't say whether the government planned to replace Vance any time soon, Sajjan said the general has brought important qualities and attributes to the high-profile and difficult position over the past four-plus years.

Those include Vance's experience having served in Afghanistan and elsewhere and the work that he put into helping the government develop its defence policy, which was released in June 2017.

"I'm very happy with the service that Gen. Vance has given," Sajjan said.

"There's only one four-star general in our Canadian Armed Forces. You don't get there easily and every single one brings a unique experience. And Gen. Vance has brought very important experience during a very important time."

Speculation about Vance's future has been mounting if for no other reason than the amount of time he has spent as Canada's top military general, said defence analyst David Perry of the Canadian Global Affairs Institute.

Exactly who would replace him is an open question, however.

Norman's suspension and subsequent retirement contributed to a wider series of changes within the top ranks that have left many senior commanders relatively new in their positions.

The reality is that Vance and Sajjan, who has served as defence minister since the Liberals were first elected to power in fall 2015, have emerged as the "constants" at the Department of National Defence and Canadian Armed Forces, said Perry.

Given that and indications the Liberals do not have big plans to dramatically switch directions or roll out new initiatives for the military, "I think there's going to be a lot of continuity," he added.

Which on the surface would suggest no immediate changes at the top.

"Certainly the signals the government has sent to this point of time look a lot more like continuity and continuing to implement the policy and the framework that they set in place during the last Parliament."

This report by The Canadian Press was first published on Dec. 15, 2019.