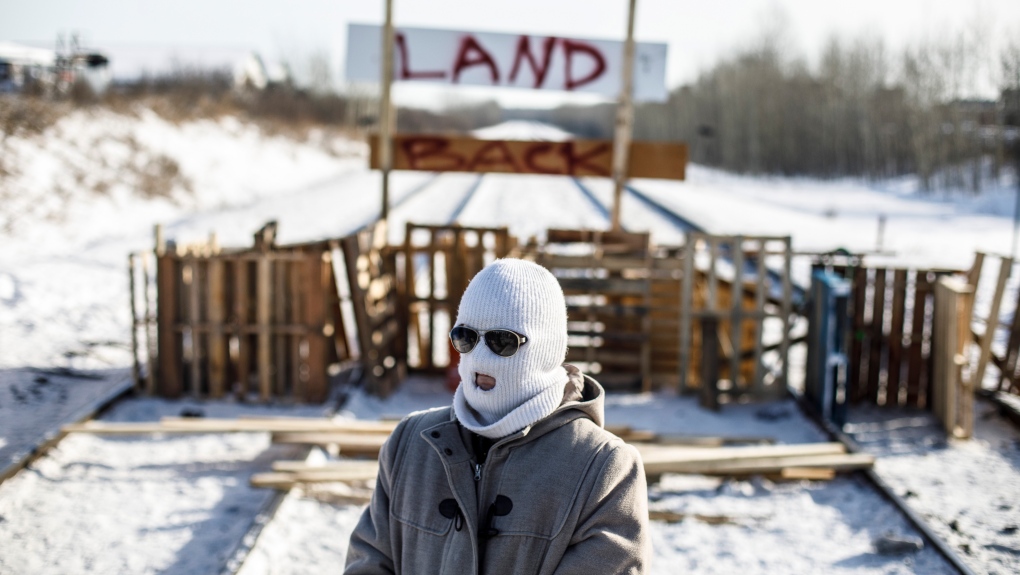 Supporters of the Wet'suwet'en who are against the LNG pipeline, block a CN Rail line just west of Edmonton on Wednesday February 19, 2020. THE CANADIAN PRESS/Jason Franson

OTTAWA -- Canada’s Justice Minister David Lametti says escalating protests in solidarity with the Wet’suwet’en Nation that saw demonstrators light fires near rail tracks and throw pallets at a moving train this week was senseless, yet not an act of terrorism as some Conservatives have suggested.

Lametti says there’s “fuel being thrown onto the fire” by politicians like longtime Conservative MP and party leadership contender Erin O’Toole, who stated that the acts by demonstrators who chucked snowballs, debris, and lit wooden pallets at a CN train travelling through Belleville, Ont., constituted “domestic terrorism.”

"I think an act of stupidity like getting in the way of a train or throwing a snowball at the train, which is exceptionally dangerous, puts your own life in danger, far from an act of terrorism,” said Lametti in an interview on CTV’s Question Period.

The videos that emerged Wednesday showing the incident at Tyendinaga, Ont., the site of one of the blockades erected in solidarity with a group of Wet’suwet’en hereditary chiefs who oppose a major natural gas pipeline through their territory, triggered backlash from politicians of all party stripes.

While Liberal ministers like Bill Blair and Marc Garneau denounced the acts as “unsafe and inappropriate,” O’Toole went a step further.

Radicals are now setting fires underneath trains and trying to derail them.

Under the criminal code, this is domestic terrorism.

It’s time we restore the rule of law and get Canada working again.

Add your name if you are with me: https://t.co/PEB79TgrHN pic.twitter.com/kSd0IGZEGb

"I would dispute his interpretation of the Criminal Code in that matter,” said Lametti.

The government has faced mounting pressure from opposition in recent weeks to signal more overtly to police authorities to enforce the rule of law and shut down the blockades disrupting rail travel across the country.

In response, Lametti said it remains up to the discretion of regional police to decide “how they move in and if they move in at all.”

The Wet’suwet’en Nation has made it known they wish to see RCMP leave their territory entirely before engaging in resolutory talks with the federal or provincial governments. To enable this, the Mohawk Council of Kahnawake has offered up peacekeepers to patrol the area instead.

“The key demand is for the RCMP to leave, but there is a need for policing services to offer assistance in everyday matters. We feel this can lead to an immediate de-escalation of the current crisis,” Grand Chief Joseph Tokwiro Norton said in a statement released Friday.

The federal minister for Crown-Indigenous Relations Carolyn Bennett and her B.C. counterpart Scott Fraser are in the province meeting with the hereditary chiefs to try to break the impasse in the pipeline dispute and carve a path forward.

Two former premiers from provinces at the heart of the issue – Kathleen Wynne and Christy Clark – also weighed in on the issue on CTV’s Question Period, airing Sunday.

Wynne said the manner in which the conflict and the proposals for a solution have been discussed by politicians at all levels of government has been unproductive thus far.

"The polarization between 'We've got to knock some heads and make this stop' and 'We've got to just talk forever,' I mean, the process is somewhere in between."

Clark said the discrepancy between what’s discussed in Ottawa and what’s heard on the ground in rural B.C. communities is a barrier, and that Prime Minister Justin Trudeau could have de-escalated the situation quicker had he visited with Wet’suwet’en right away.

“Their position on it seems to be they don’t want to go until they know what the outcome of the meeting is going to be. That's not how discussions with Indigenous people can work anymore in Canada."