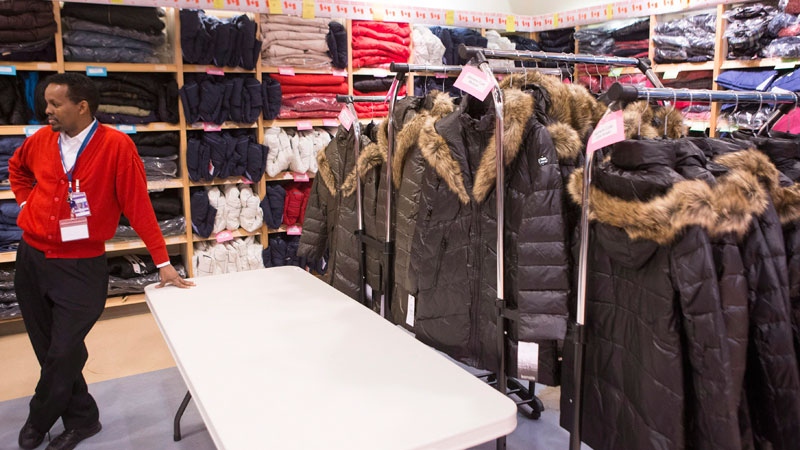 A member of staff stands by a rack of winter coats that are to be provided to Syrian refugees upon their arrival at the Welcome Centre at Toronto's Pearson Airport on Friday, Dec. 18, 2015. (Chris Young / THE CANADIAN PRESS)

OTTAWA - As the Liberal government's target date to resettle 25,000 Syrian refugees inches ever closer, a government analysis of those who've already arrived paints a sobering picture of the resettlement challenge ahead.

The chief concern lies with the government-assisted refugee population, those whose costs are covered entirely by taxpayers in their first year and who see their needs addressed by resettlement agencies in one of 36 Canadian cities.

Data obtained by The Canadian Press shows that government-assisted refugees have more children, lower language skills and lower education levels compared with those being resettled by private groups.

"Overall, the needs of this population are higher than originally expected," says the six-page brief from the Immigration Department.

But, the department adds, those needs are common among all government-assisted refugees. What's unique for the Syrians is the time frame - the entire contingent will have been resettled in about two and a half months.

"The government of Canada continues to encourage innovative thinking and collaboration between all tiers of government and service-providing organizations in the areas of language-training, education and vocational services to assist in the successful integration of this population," the analysis says.

The analysis reviewed information on Syrian refugees processed between November 2015 and January 2016, focusing mainly on those coming out of Jordan.

While the report says the government doesn't foresee the need for widespread changes to existing programs, here's a look at what it found, and some of the implications for resettlement providers.