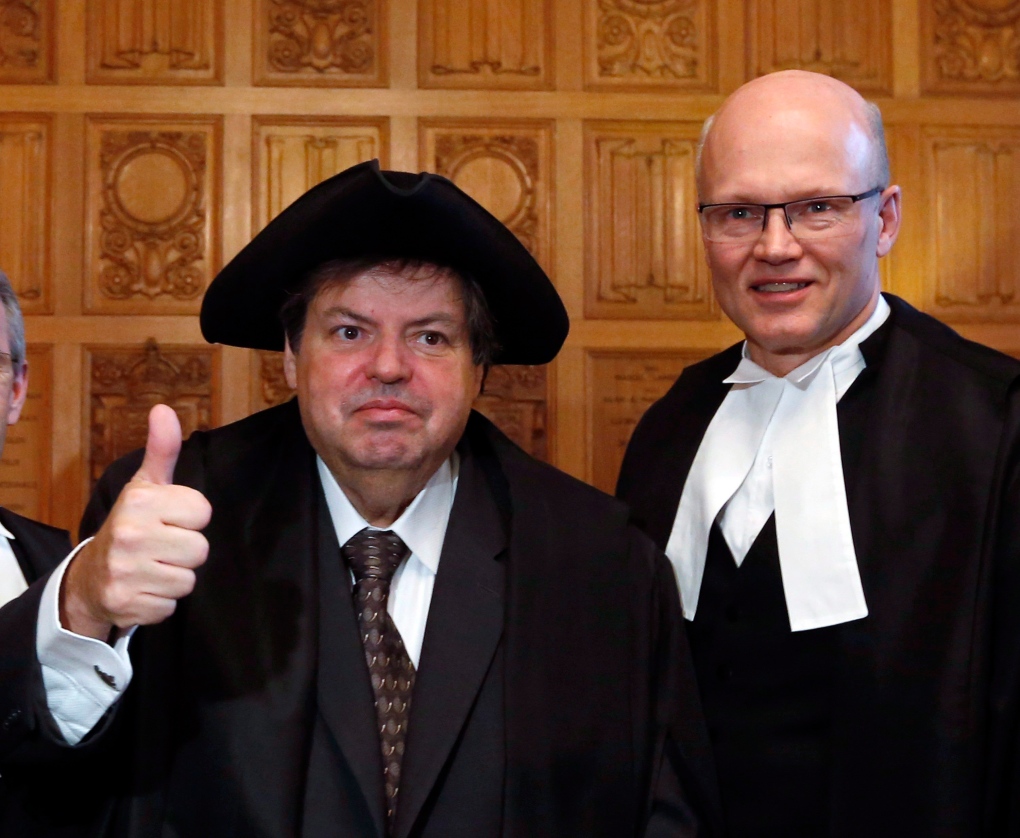 The Liberals are using parliamentary rules to give themselves more time on a bill to make the national anthem gender-neutral.

The government gave notice of a motion to tweak the bill's title Thursday night. The notice came hours after the Conservatives denied unanimous consent to transfer the bill's sponsorship from Mauril Bélanger, who is terminally ill, to party whip Andrew Leslie.

Bélanger was diagnosed with ALS, or Lou Gehrig's disease, last fall following the federal election. A diagnosis is usually terminal in two to five years.

It wasn't clear whether Bélanger was well enough to move third reading on Friday when his bill was to come up on the schedule. Leslie moved Thursday to transfer the bill's sponsorship to himself, but the Conservatives blocked the move.

House rules mean the bill's sponsor has to be in the chamber at the right time to move third reading, the last stage of debate before a bill gets its final vote there.

Having the option to debate the bill's title change means Bélanger won't have to be there until the next time the bill is scheduled. It also buys them more time to try to win unanimous consent for the transfer.

Bélanger found out shortly after his re-election last fall that he has ALS, and gave up his bid to be Speaker of the House.

His private member's bill proposes to change the words "in all thy sons command" to "in all of us command."

The bill has made it most of the way through the House of Commons, including having been studied at the Canadian heritage committee.

If Belanger can't move third reading, and the Liberals can’t get consent to transfer the bill from Bélanger to someone else, when he dies the bill will too.

"What a shame! CPC blocks consent to allow Mauril Bélanger's [private member's bill] on inclusive O Canada to proceed, even if he is too sick to be here," Green Party Leader Elizabeth May said on Twitter.

It's not clear whether Bélanger is healthy enough to make it to the House to move third reading. He was in a wheelchair the last time he attended.

Lyrics would be from 'original version'

Leslie responded to criticism the national anthem shouldn’t be changed from the existing version because it’s traditional. The current lyrics aren’t the original words, he noted.

"Mauril's recommendation, which is very wise, is turning [the lyrics] back to the original version which occurred prior to the end of the First World War," Leslie said.

This is the second time the Liberals have tried to accommodate Bélanger's bill but been blocked by the Conservatives on procedural issues.

Last month, the Liberals wanted to fast-track the bill by ending second-reading debate after one hour instead of waiting for a second hour of debate a week later. Another MP with a private member's bill in front of the House traded slots with Bélanger so he could bring his bill back sooner, rather than waiting weeks or months.

Conservative House leader Andrew Scheer wouldn't say who voted against the motion, but the vast majority of his caucus is opposed to it. Because Leslie needed unanimous consent, any MP can yell "no" to kill the measure. Several voices could be heard denying consent on the live broadcast of the House.

"We all love and support Mauril and we understand he's going through a difficult time and wish him well with that, as best as he's able to manage a very serious illnes," Scheer said. "But it's not about Mauril, it's about the bill itself, and the vast majority of our caucus are opposed to the bill.... This bill changes the national anthem. I think Canadians have a right to be informed about that, consulted about that and have a proper debate on that."

The Liberals, NDP and May, the lone Green Party MP, all support the measure. That gives it enough support to pass through the House eventually. The bill would still need to get through three readings and the committee stage in the Senate in order to become law.