OTTAWA – Jane Philpott has resigned from her role as Treasury Board President in Prime Minister Justin Trudeau’s federal cabinet, saying that she has lost confidence in the way the government is handling the ongoing SNC-Lavalin scandal.

CTV News spoke with Philpott at the Ottawa airport on Monday night. She said she spoke with Trudeau about her departure from cabinet on Monday morning.

Reacting to her departure, Trudeau said he knows Philpott had "felt this way for some time," and told supporters gathered at a climate change rally in Toronto that he is taking the ongoing affair that has dominated headlines for nearly a month "very seriously."

In a statement posted to her MP website, Philpott said that the recent events, including the SNC-Lavalin scandal, "have shaken the federal government in recent weeks and after serious reflection, I have concluded that I must resign as a member of cabinet."

Trudeau has been facing calls to resign after former attorney general Jody Wilson-Raybould testified at the House Justice Committee last week that she faced high-level "veiled threats" and "sustained" political interference to try to get her to instruct federal prosecutors to drop the criminal prosecution of the Quebec construction and engineering company that is facing bribery and corruption charges.

In her resignation letter Philpott cites the convention of cabinet solidarity—where ministers must always be prepared to defend other ministers publicly—in saying that it has become "untenable" to continue to serve in cabinet.

Trudeau vowed to continue the work Philpott was a part of. "In a democracy like ours and in a space where we value our diversity so strongly, we're allowed to have disagreements and debate," Trudeau said. "This matter has generated an important discussion: how democratic institutions, specifically the federal ministry and the staff and officials that support it, conduct themselves, is critical and core to all of our principles."

Trudeau said that while there are still more questions to be answered, there will be more to be said in the "coming days and weeks."

He implored the largely cheering crowd, peppered with a handful of hecklers, to be mindful of the "bigger picture" that his government was elected on.

Philpott said the evidence of alleged pressure offered by her friend and former fellow minister has "raised serious concerns" for her.

"The solemn principles at stake are the independence and integrity of our justice system…. Sadly, I have lost confidence in how the government has dealt with this matter and in how it has responded to the issues raised," Philpott said in her resignation letter to Trudeau.

In a statement Trudeau's office said that he spoke with Philpott about her decision to resign, and that he "accepted" it and thanked her for her service.

Public Services and Procurement and Accessibility Minister Carla Qualtrough is assuming Philpott's portfolio in an acting capacity. It's yet to be seen if this will prompt the third cabinet shuffle in as many months, or whether a sole person will be named to that role. Treasury Board President is a role typically held by a more senior minister.

CTV News reached out to all 33 remaining ministers' offices, and all have responded, confirming that they still have confidence in the prime minister and many also saying that they have no intention of resigning from cabinet.

"I have absolute confidence in our government, and our Prime Minister, and will continue the vital work of advancing reconciliation and self-determination as the Minister of Crown-Indigenous Relations," said Indigenous Crown Relations Minister Carolyn Bennett.

"Canadians elected this government on the promise of a strong economy and a Canada that works for everybody. Under this Prime Minister we have delivered on that promise… Not only do I support the prime minister, I’m proud of him and how he continues to fight for Canadians, for jobs and for equality," said Small Business and Export Promotion Minister Mary Ng. She used to work in the PMO as director of appointments.

He made a direct call to other Liberal cabinet ministers to think about following suit.

"Is this what you got into politics for?" Scheer said. "If not, it’s time for them to stand up and be heard, like Jane Philpott did today."

Scheer said that the remaining cabinet ministers either need to force Trudeau to stand down or disassociate themselves from the scandal.

NDP Leader Jagmeet Singh said in a tweet that Philpott's resignation "now more than ever" compels the need for a public inquiry. He said it raises "serious questions" about the alleged interference of Trudeau's government and its commitment to reconciliation.

The New Democrats are calling for Trudeau to testify under oath about the whole scandal.

"Jane Philpott has made her decision based on information she received from cabinet; Canadians deserve to know what happened as well," Singh said in the statement.

Philpott was first elected in 2015 to represent Markham-Stouffville in Ontario and has held three different ministerial portfolios.

She was first named as federal health minister and was central to installing a physician-assisted dying regime.

Then, Trudeau created the ministry of Indigenous services and tapped Philpott to head it. There, she was tasked with working to reset the nation-to-nation relationship with Indigenous people, chipping away at boil water advisories in First Nations communities and drafting child welfare legislation.

Then in January, when longtime Liberal Scott Brison announced he was leaving cabinet in desire of a new challenge and more family time, she was shuffled in to fill his role at the Treasury Board.

Many considered her to be one of the highest-performing cabinet ministers.

In her statement Philpott says it has been an honour to "play a leading role" in several big government initiatives, from working to rebuild the nation-to-nation relationship with Indigenous people, to legislating physician-assisted death. She said it "grieves" her to leave but she had to act on her principles.

On CTV's Power Play, Liberal MP and parliamentary secretary to Qualtrough, Steven MacKinnon, called Philpott a "highly-respected minister" but downplayed this high-profile departure as being symptomatic of a larger problem. He called it a "disagreement" over the "philosophy and the approach" to the SNC-Lavalin case.

NDP MP and Indigenous affairs critic Charlie Angus said that her resignation was a "watershed moment" in the SNC-Lavalin scandal, as well as a "sad day" for Canada as "nobody in government has done more to push reconciliation" than she had. 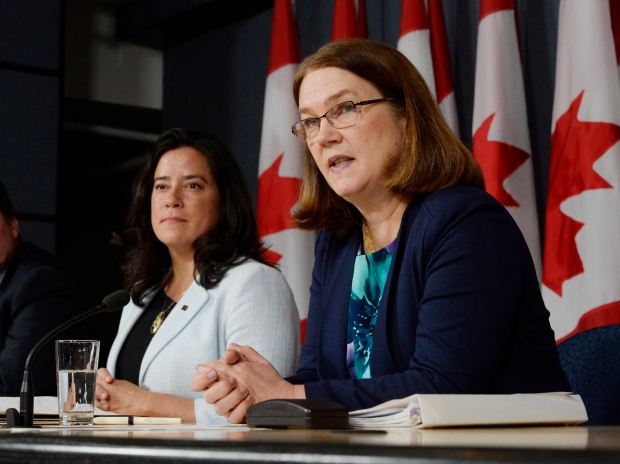 Staying on as MP

Like Wilson-Raybould, Philpott intends to continue to keep her role as a Liberal MP. She won her riding in 2015 with 49.2 per cent of the vote.

Trudeau has said he’s still reflecting on whether or not Wilson-Raybould will be welcome in the Liberal caucus based on her testimony, and it’s to be seen whether he’ll offer a similar remark about Philpott.

Prior to her career in politics, Philpott was a family doctor.

After Wilson-Raybould resigned, Philpott tweeted a photo of the two of them, saying that Wilson-Raybould taught her "so much," and that she knows she would "continue to serve Canadians."

On Monday Wilson-Raybould posted her own kind words about her friend and colleague, calling her "incomparable," and a "mother of country."

"For almost four years our country has witnessed your constant & unassailable commitment to always doing what is right & best for Cdns. You are a leader of vision & strength & I look forward to continuing to work alongside you," Wilson-Raybould tweeted.

Reacting to the sudden resignation, fellow Liberal MP Celina Caesar-Chavannes—who announced this weekend that she won’t be running again—tweeted: "When you add women, please do not expect the status quo. Expect us to make correct decisions, stand for what is right and exit when values are compromised."

A second Liberal MP, Wayne Long, has spoken out—not the first time for him on this case—to say Philpott’s resignation further bolsters the argument that an independent investigation is needed.

"I am deeply troubled by the fact that Ms. Philpott felt the need to resign as a result of our government’s handling of this matter," Long said in a statement. "I believe that we will not be able to successfully return our focus to this work until they have those answers."

Lori Williams, political science professor at Mount Royal University in Calgary, said that Philpott’s departure is a "tremendous loss for the government."

In an interview on CTV News Channel Williams said that it is "very difficult to imagine what the government can now do to try to recover."

"Clearly, conversations have been happening for some time and the concerns that were raised were not being addressed to the satisfaction of former minister Philpott," she said.

On CTV's Power Play, Summa Strategies vice president and former Conservative staffer Kate Harrison said that ahead of the previous election, the Liberal Party recruited a number of established professionals who were not partisans, on the promise to do politics in a less partisan way. Harrison said that Philpott’s resignation is the result of not delivering on that promise.

"There is a real danger of other, new recruits being extremely dissatisfied and disaffected by the way this government has run. It is not government-by-cabinet as it was purported to be," Harrison said.

To the incomparable @janephilpott, truly the #MOC...For almost 4 years our country has witnessed your constant & unassailable commitment to always doing what is right & best for Cdns. You are a leader of vision & strength & I look forward to continuing to work alongside you. ❤️U. pic.twitter.com/bwL6ouQjSA

It grieves me to resign from a portfolio where I was at work to deliver an important mandate. I must abide by my core values, my ethical responsibilities, constitutional obligations. There can be a cost to acting on one’s principles, but there is a bigger cost to abandoning them. pic.twitter.com/EwO5dtdgG6