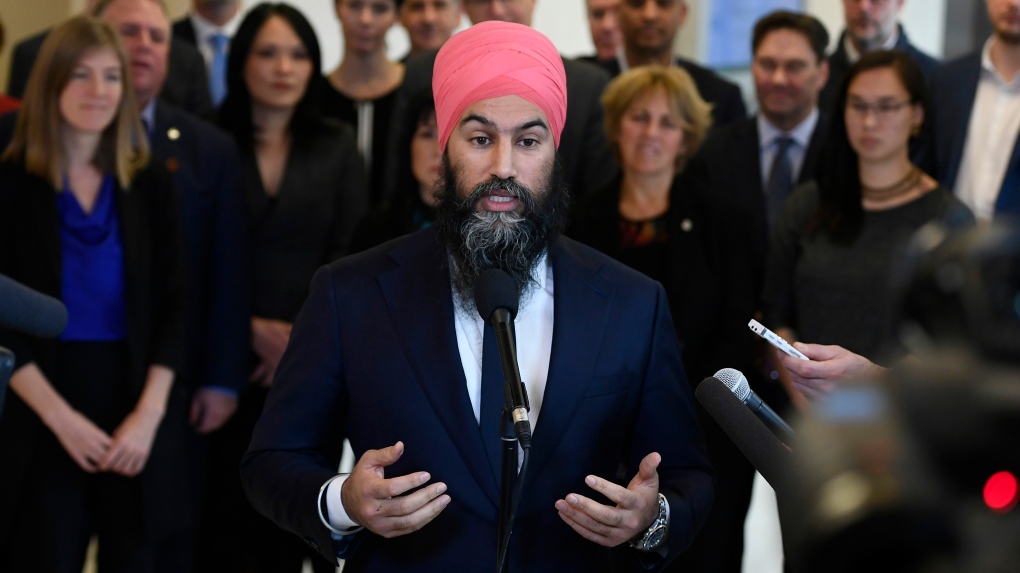 NDP leader Jagmeet Singh stands in front of his caucus as he speaks to reporters after the weekly caucus meeting in Ottawa on Wednesday, Dec. 4, 2019. THE CANADIAN PRESS/Justin Tang

OTTAWA -- NDP Leader Jagmeet Singh says his caucus is ready to work with Prime Minister Justin Trudeau, but he should not take their support for granted.

"We are more than willing to work together, but we will not vote for something that doesn't align with what Canadians need," Singh said Wednesday.

Singh said he is looking for a number of specific things in Thursday's throne speech, including bolder targets for reducing greenhouse-gas emissions as way to fight climate change, and accountability measures to ensure those efforts stay on track.

"We know that governments set targets and then miss them," Singh said. "That's not good enough."

The New Democrats have not proposed specific targets for reducing greenhouse-gas emissions, but Singh has said he wants them to be based on science and designed to keep average global temperatures from rising more than 1.5 C.

The Liberals promised during the campaign that they'd set Canada on a path to have zero net emissions of greenhouse gases by 2050. The current official target is to reach 30 per cent below 2005 levels by 2030, which would still mean emitting hundreds of millions of tonnes of carbon dioxide and its equivalents.

Singh said he also wants the Liberal government to drop its legal fight against a Canadian Human Rights Tribunal order for Ottawa to compensate First Nations children who were inappropriately placed in foster care.

And he wants a firm commitment to universal pharmacare and greater investments in health care.

The Liberals and the NDP both campaigned on promises to bring in some form of universal pharmacare.

Most of Canada's premiers expressed hesitation about a national pharmacare program when they gathered in Mississauga, Ont., on Monday.

They repeated their call for a 5.2 per cent increase in annual health-care transfer payments from the federal government, but several said now might not be the best time to create a national pharmacare program, as provinces need funding to deal with growing wait times and overcrowded hospitals.

There are 24 NDP MPs, which means they have enough votes to keep the Liberal minority government in power.

But Singh said if Trudeau's goal is simply power, rather than meaningful progress, he can turn to the Conservatives, who have 121 MPs, or the Bloc Quebecois, who have 32 MPs, for support.

"He can go to the Bloc or the Conservatives if he just wants to run the government and stay in power, but if he wants to do something real that is actually going to tackle the problems that people are worried about right now -- climate crisis, housing, health care -- we are there," Singh said.

"We can work on those things together."

Singh also says that he doesn’t want to tear down government for no reason. Something to watch on future confidence votes. #cdnpoli