What may be the first confidence vote? Answers to key questions about the start of a new Parliament

OTTAWA -- The 43rd Parliament begins today. The first day includes a lot of pomp but also a heavy dose of procedure. It will begin with the election of a House of Commons Speaker, followed by the government’s speech from the throne. How will that all work? And what happens after those two key moments pass?

Here's a procedurally-condensed rundown of some of the key questions that surround the opening of a new Parliament.

How is the House of Commons Speaker determined?

The first thing MPs have to do at the start of a new Parliament is elect a Speaker of the House of Commons.

Since a rule change was made in 2015, this is now done by a secret and ranked ballot vote. This means the only thing that will be made public is the name of the winner, not how many ballots it took, or by how many votes they won.

All members of Parliament except for ministers and party leaders are eligible and automatically considered candidates for the role. If an MP doesn't want to be considered, they had to inform the House of Commons to remove their name from the list no later than 6 p.m. Wednesday, though there is still the ability for candidates to withdraw their name on the House of Commons floor on Thursday.

The dean of the House, aka the MP with the longest continuous service, will oversee the election. This will once again be Bloc Quebecois MP Louis Plamondon, who was first elected in 1984, making this his fourth time as the dean.

Before the vote each candidate has five minutes to make their case, then after a 30 minute break for any final lobbying, the voting begins.

MPs receive their ballots from a House clerk and then cast their votes behind the curtains. House officials will then count the votes and if no one candidate secures more than an absolute majority on the first ballot, then the candidate with the fewest is eliminated and the votes they received are then redistributed to the second choice on those ballots. This continues until one person receives more than half the votes.

Once the winner is named they will be invited to take the chair. Traditionally they are ushered up by the prime minister and Official Opposition leader and the new Speaker is to display some degree of ceremonial resistance to walk up, given the role in the past was one MPs were actually reluctant to take. The new Speaker will accept any congratulatory messages from members before suspending the House to head over to the Senate for the throne speech.

The deputy and assistant deputy speakers are named in subsequent days and generally are decided upon by consensus amongst the party leaders.

What's with MPs travelling between the House and Senate?

On the first day of a new Parliament, MPs do this twice. They are first summoned briefly to be informed they need to elect a Speaker, and then afterwards to summon them to the Senate for the throne speech. This summoning happens by the Usher of the Black Rod -- a senior protocol officer in Parliament and personal messenger of the Governor General.

Historically these two trips to the Senate meant MPs walked down the hall in Centre Block from the House to the Senate. Now that they are located in different buildings, these processions are being done by Parliament Hill shuttle busses. According to House officials a condensed number of MPs will take part this time, and who will be included is being decided by each party's leadership. For the Liberals this pool is being limited to just the House leadership team, CTVNews.ca is told.

Once in the Senate chamber, MPs have to stay behind the brass bar to view the speech, while Senators and other dignitaries will be on the Senate floor to listen.

According to House officials who briefed reporters on the flow of the opening day, Ottawa police will be helping manage traffic to allow for this caravan of busses containing the House officials and MPs to travel from West Block to the Senate of Canada building.

The opening of this Parliament is the first time that the Speaker election and throne speech are happening on the same day since 1988, according to House officials. The throne speech is usually delivered by the Governor General, as the representative of the Queen, and is meant to highlight the government's priorities for the new Parliament, including the bills or policies it intends to introduce. 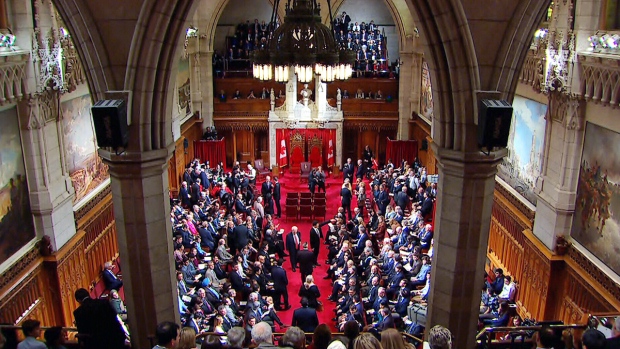 What will be the first test of confidence?

It all depends on timing and the way the government wants to orchestrate its agenda.

In general there are a few bills or motions that are typically considered confidence matters—votes that test a government’s confidence in the House of Commons—the throne speech, budget bills, and any supply bills like the estimates.

While it's thought that the first confidence vote to come up will be on the reply to the speech from the throne, the way the fiscal calendar falls means that the first actual "money vote," as they're called, could be on the supplementary estimates.

Should the government determine that it needs "supply" -- money to flow to get through to the fiscal year's end in this case -- they'll have to pass that supplementary estimates bill on or before Dec. 10, according to House officials. This also means that there needs to be an opposition day in the Commons on or before then. Typically these two matters will be dealt with on the same day, and could be the first real test of the Liberals' ability to garner support from the opposition parties, given they are 13 votes short of a majority.

What will be the first bill?

There has been some talk about what the Liberals' "first bill" of the new Parliament will be. Regardless of the topic, it'll actually be the second bill of the Parliament.

That's because the first bill, aka "C-1," is a pro-forma piece of legislation that is pre-determined. This bill is essentially the House affirming its right to consider any matter that it deems important, regardless of what's in the throne speech. It's always titled "the act respecting the administration of oaths of office." It never proceeds past first reading.

This makes Bill C-2 the government's actual first promise-specific piece of legislation. The Liberals have said they would look to advance another middle-class tax cut, but now with NAFTA ratification heating up, it's a possibility that could get tabled first. Either way, the earliest a bill other than C-1 could get tabled in the new Parliament is on the Monday following the opening of the new session, so Dec. 9.

Committees on the other hand, will likely not get rolling until January because the membership needs to be decided and the House Affairs Committee that'll do that has 10 days after the start of a session to make those selections.

And what about private members' bills?

It's possible private members' bills won't begin to be debated until late March or early April.

That's because there’s a whole process that unfolds to get that cycle rolling. First, there is a random draw at the start of the session that determines the order in which all MPs who are able to sponsor a private member’s bill will be allowed to bring their initiative forward. After the list is established -- called the order of precedence -- then MPs have some time to craft their bill or motion and table it.

The list is permanent and remains unchanged over the course of the Parliament but is grouped into chunks of 30, and within that smaller pool of MPs members can swap slots.

In 2015 private members' bills didn't start being debated until April, so House officials estimate it could take until around then again to get going. Until there are these bills to debate the extra hour allotted each day goes to the government.

Five MPs vying to be next House of Commons Speaker

Who's who: Complete list of Justin Trudeau's Liberal cabinet