Don Martin: It's all about him -- and that's why Trudeau is in trouble 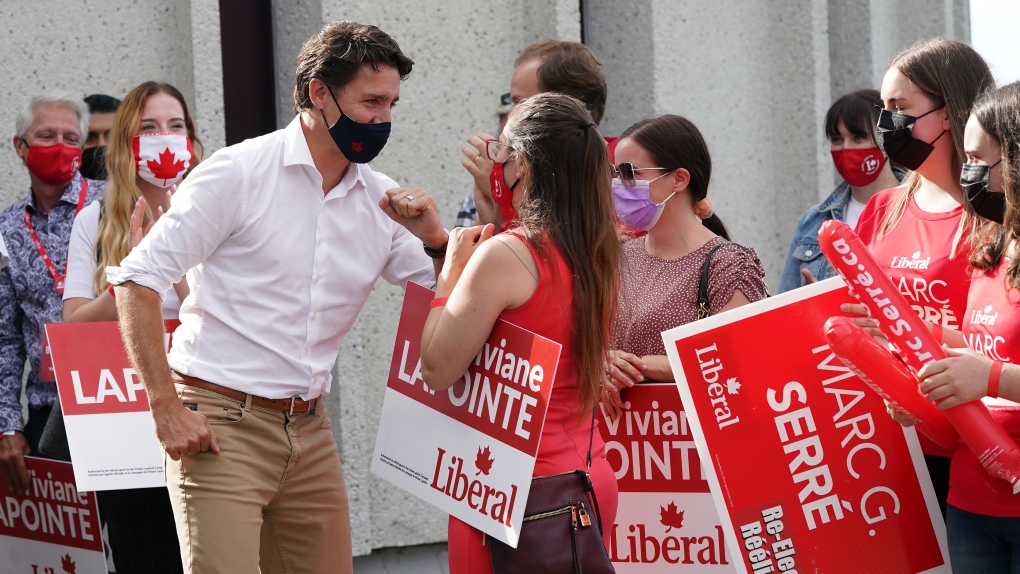 Liberal Leader Justin Trudeau speaks to supporters during his campaign visit to the University of Sudbury in Sudbury, Ontario on Tuesday, August 31, 2021. THE CANADIAN PRESS/Nathan Denette

OTTAWA -- Forgotten is 2015’s Trudeaumania, when it was all about him as the anti-Harper.

Six years later, it’s still all about him as the Liberal leader launched the campaign as a Trudeauerendum on his pandemic performance.

But three weeks after Liberal Leader Justin Trudeau started the victory lap for his vaccination procurement success, the Liberal party is flirting with a future in the Official Opposition – and it’s very much all because of him.

Vote 2021 is a most unnecessary election at a most inconvenient time and this prevailing view did not die quickly, as expected.

The pointlessness of it all is sticking to Trudeau as a defining negative in a campaign now almost halfway over.

The polls are dead-heating between Trudeau and Conservative Leader Erin O’Toole and the momentum is painted in a surging shade of blue.

With the spectre of a potential loss starting to register, Trudeau is clearly getting desperate.

Such was the case Tuesday when Trudeau decided the time to call for respectful disagreement with his daily entourage of loud, profane anti-vaxxers was over. It’s time to shame and condemn the anti-vaxxers as a danger to our kids, he fumed.

Now, to back up a bit, I’ve covered seven federal campaigns and never seen a leader’s tour stage an event where protesters can get within shouting range unless, that is, they think the sound and fury on camera is electorally beneficial to their candidate.

Be that as it may, Trudeau then proceeded to fly off in a bizarre new direction by denouncing O’Toole for failing to condemn his protests, even though the Conservative leader did precisely that last week.

On Tuesday night they went even further by issuing an attack on O’Toole for not ensuring his own candidates are vaccinated even though Trudeau admitted last week not all his Liberal MP wannabes had the double dose.

But this is classic Trudeau hypocrisy delivered with moist gobs of double speak.

He has, for example, claimed to be a feminist for his entire political career, yet he’s now allowing one of his veteran MPs to seek re-election despite repeated allegations of sexual impropriety going back six years. This while O’Toole banished a Nova Scotia candidate when a single two-year-old allegation was raised against him.

And don’t even get me started on Trudeau’s laughable claim that ‘Canada is back’ on the world stage now that he has abandoned 1,250 nationals, residents and their families in Afghanistan, including many fighting for women’s rights in a place where those rights will no longer exist under the Taliban.

Wrap all this up in a campaign that Trudeau insists almost daily is vital to our future, just as nervous parents expose their children to a fourth wave in the classroom, and you have an inkling of why he could be in deep trouble.

After all, despite having had three weeks to justify the ‘historic election’ call, his party still hasn’t released a comprehensive platform to blueprint any essential and unique Liberal-guided future (you’ll know the polling is particularly bleak if Trudeau promises a guaranteed annual income when it does come out, possibly Wednesday).

Until that happens, we’re left with a stage-managed Trudeau delivering embellished rhetoric and cheap shots over the noise of a mob he’s now exploiting for political points.

A campaign where important compare-and-contrast issues could and should be up for discussion is reaching a point where the only wedge issue taking shape is between those who loath and like Justin Trudeau.

Go ahead. Ask your friends. Just try to discuss important policy differences between Liberals, Conservatives and NDP. It will be a short conversation and inevitably whipsaw back to the leader they dislike the most, invariably Trudeau.

It’s worth noting my francophone friends say Trudeau did so well in a recent televised French language interview that some Conservatives suspect he knew the questions in advance. Which he certainly didn’t.

And being the veteran on the debate stage next week, the Liberal leader may well excel at a critical time when millions of voting Canadians leave behind their patios and cottage decks to finally tune in.

But as we hit the halfway point of the campaign, policy has so far taken a distant back seat to personality – and one person in particular.

The ballot box question may have seemed a complicated vote on our future as a country when the election was called, but it’s getting very simple now: Prime Minister Justin Trudeau: Re-elect or reject?

Conservatives would balance budget with economic ramp-up and 'without cuts': O'Toole

What's in an ad? Dissecting the parties' early campaign messaging