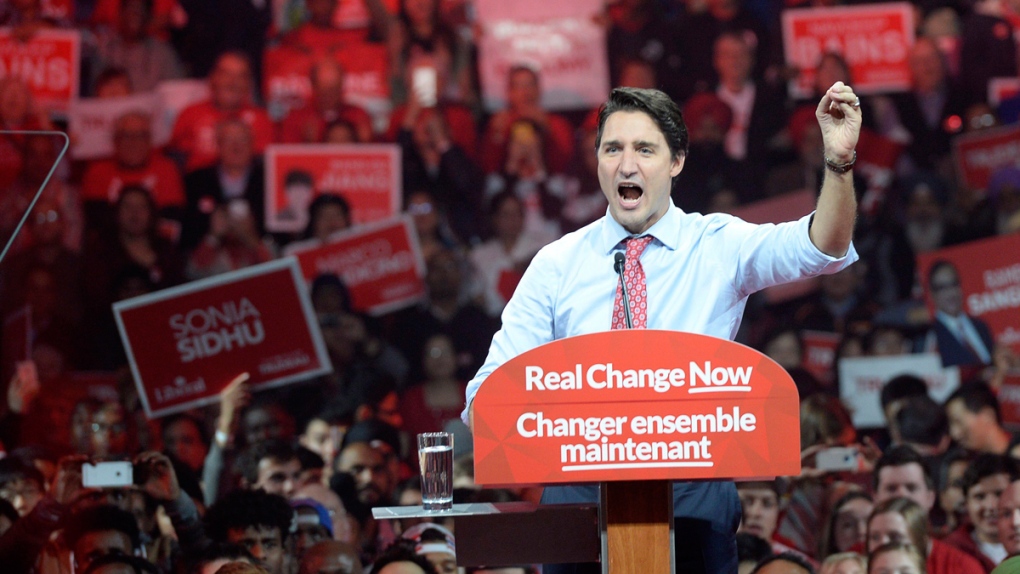 BRAMPTON, Ont. -- Raj Grewal spies a dozen older Sikh women holding court around a picnic table in a suburban Brampton, Ont., park and strides over, switching to Punjabi and introducing himself as the area's Liberal candidate.

The women exchange some skeptical glances -- Grewal receives a warmer welcome at the table full of elderly Sikh men -- but they ask a few questions and accept some flyers. One mentions she went to school with Grewal's aunt in India.

The young candidate, a lawyer in his other life, jogs off to continue on his nightly door knocking in his Brampton East riding, where 60 per cent of the nearly 100,000 residents are immigrants and 88 per cent identify as a visible minority.

"I speak Punjabi, but if I spoke Hindi and Urdu (too) it would be better," he explains.

Welcome to battleground Brampton, the heart of growing Toronto-area multicultural suburbs and one of the keys to the national fight between the Conservatives and the Liberals.

The area was for years a Liberal stronghold, but in 2011 each Brampton riding turned from Liberal to Conservative, helping sweep the Tories to a majority government.

Due to the region's fast growth -- the population boomed 21 per cent between 2006 and 2011, compared to the six-per-cent national average -- its seats were redistributed and there are now five Brampton seats for which the parties are vying.

"There's so many potential shifts that can happen in Ontario, depending on what the issue is, who's in the ascension, what the other methods of influence are there, that you want to win as many of those 905 seats as you can," said Tim Powers, a Conservative strategist who is not advising in this campaign.

The new Brampton ridings are considered very much in play, and perhaps none more so than Brampton East, one of the few without a Conservative incumbent.

It's no coincidence the Liberals picked Brampton to hold their largest rally of the campaign last Sunday. It was leader Justin Trudeau's third visit to the city in just the last six weeks, and he delivered a message of inclusivity to the diverse crowd of thousands of supporters.

While the cultural makeup of Brampton East may be different than other ridings in the country, their priorities in this election are similar. Residents who were asked about their No. 1 issue this campaign resoundingly said jobs and the economy.

That likely helps the Conservatives, as leader Stephen Harper has spent much time and energy positioning himself as the best economic steward and trumpeting his job-creation record.

But also top of mind in Brampton is infrastructure -- particularly of the transit variety.

In a rapidly expanding region where many commute on gridlocked highways to Toronto for work, the Liberals' promise to spend $20 billion on transit infrastructure alone over 10 years across the country could go a long way.

"We'd like to see roads that aren't jam-packed from 5 o'clock to 8 o'clock," said resident Neville Johnson.

"I've driven across this country several times and as soon as you get to the GTA it's like, it'll take hours and hours to get across the country, then hours and hours just to get from one side of the GTA to the other."

While much of Brampton, and the country, if recent polls are to be believed, is a fight between the Conservatives and the Liberals, the NDP isn't being entirely counted out in Brampton East.

Buoyed by a New Democrat surge in 2011 as well as a highly popular candidate in the area's former riding, then-candidate Jagmeet Singh -- now the area's provincial representative and deputy party leader -- placed an unprecedented second in that election.

NDP candidate Harbaljit Singh Kahlon sees that support for Singh as an indication of the South Asian community's disenfranchisement with the Liberals.

Changes the Conservatives made to immigration policies have been unpopular with much of the immigrant community in Brampton, Kahlon said.

The Tories had pledged to get rid of Liberal backlogs and froze applications for parents and grandparents. Instead, they instituted a "super visa" that would allow them multiple entries to Canada over 10 years.

"What the Conservatives did was create their own backlogs and they made it harder for families to connect, rejoin and get on with their lives," Kahlon said.

The super visa has not been an enticing option for many, said resident Sam Shah.

"When they settled here they prefer that their parents can come also and stay for longer, not only two years," he said.

Tory candidate Naval Bajaj, who did not accept a request for an interview, is well known in the predominantly South Asian community as the past president of the Indo-Canada Chamber of Commerce.