Facts about one of the most controversial pieces of clothing: the niqab 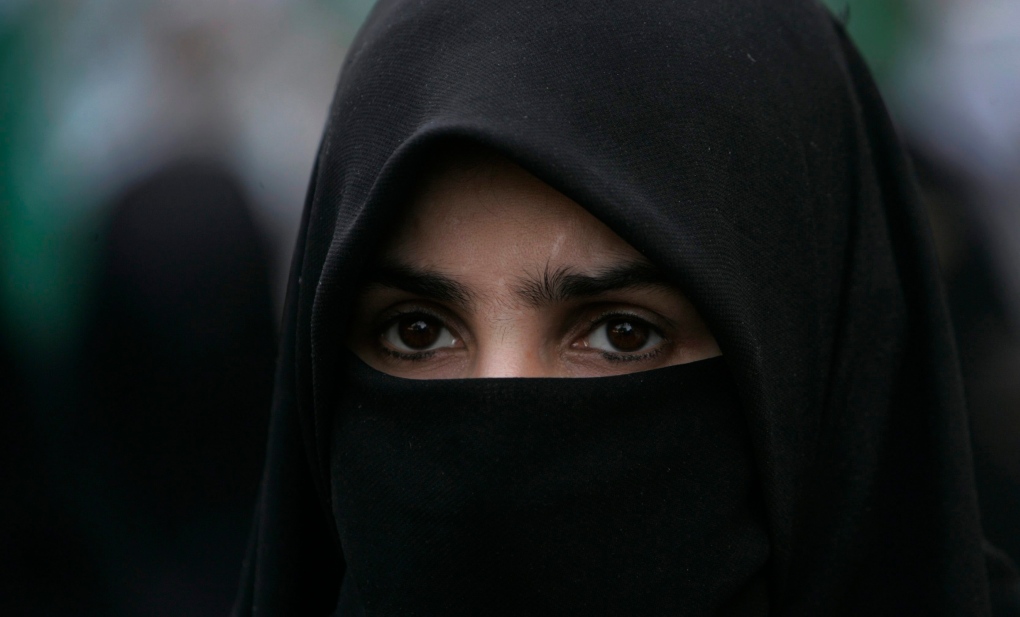 A woman is showing wearing a niqab in this 2011 file photo. (AP / Shakil Adil)

OTTAWA -- There are few pieces of clothing that have been the subject of as much political debate as the niqab. During the ongoing election campaign, the right to wear one while swearing the oath of citizenship has become an issue, thanks to an ongoing court case.

Here are some facts about the controversial garment:

What is a niqab?

The niqab is a veil worn by Muslim women that obscures nearly all of their face, except for their eyes. In some countries, even those are covered by way of a thin piece of fabric flipped down over the opening.

It is often worn as a head piece to accompany a flowing outer garment known as a jibab or an abaya. Other coverings worn by Muslim women include a hijab, which is a head scarf that generally covers the hair, ears and neck but leaves the face visible, or a burka, which is a large loose garment that covers the entire body, including the hands and has a mesh screen covering the eyes.

Why are they worn?

In Islam, women are commanded to dress modestly. But what that means has been subject to many different interpretations over the centuries.

Some scholars interpret phrases in the Koran relating to modesty as requiring that a woman's face be entirely veiled, others suggest that only the head must be covered.

In 2013, the Canadian Council of Muslim Women did a small survey of women who wear the niqab. Respondents were split on whether wearing one was necessary for Muslim women or just advisable.

When asked what factors had led them to wear the niqab, religious obligation and Muslim identity were the top two answers.

How many women in Canada wear the niqab?

There are just over one million Muslims in Canada, and about half of them are female, according to the 2011 National Household Survey.

But how many wear a niqab is unknown. The current government ban on wearing them while swearing the oath of citizenship is believed to affect about 100 women per year, according to the Federal Court decision striking down that ban as unlawful.

In the CCMW survey, the typical profile of a niqab wearer as suggested by 55 women who answered an online questionnaire was of a foreign-born, married Canadian citizen in her twenties to early thirties.

What about the rest of the world?

A 2009 study in France said about 1,900 women wore either burkas or niqabs out of a total Muslim population of at least four million.

Since 2011, France has had a ban on wearing full-face veils in public. About 1,000 fines have been issued since, according to a report in the New York Times, but many women have received multiple tickets.

In the Muslim world, Saudi Arabia and Iran are the only two majority Muslim countries in the world that legally impose a dress code for women, but neither mandate the niqab.

Once upon a time, both Syria and Turkey banned the wearing of head scarves altogether in certain public places but in recent years have eased those restrictions.