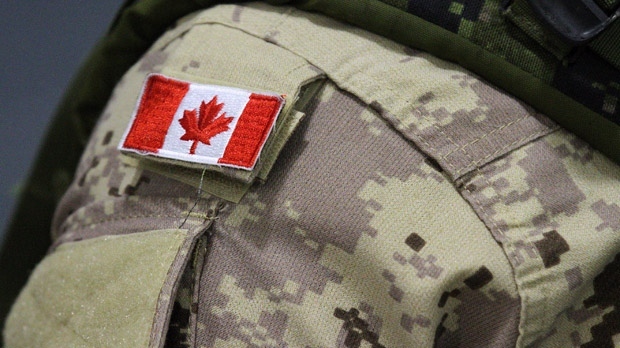 A Canadian flag sits on the shoulder of a Canadian Forces member leaving from CFB Trenton, in Trenton, Ont., on Thursday, Oct. 16, 2014. (The Canadian Press/Lars Hagberg)

OTTAWA -- A promised infusion of cash to help Veterans Affairs Canada address a massive backlog of requests for services from thousands of wounded warriors has sparked mixed reactions -- with some fearing it won't be nearly enough.

The new money, included in this week's federal budget, amounts to $42 million over two years and is specifically earmarked to speed up the delivery of services to disabled veterans.

The one-time injection of additional funds follows revelations that Veterans Affairs Canada had a backlog of 29,000 applications for disability benefits at the end of November -- a nearly 50 per cent increase over the previous eight months.

Nearly one-third of those applications had been in the queue for more than 16 weeks, which was also an increase since the spring and the latest in a long line of indications that wait times for services have continued to grow.

The government says the new funds will be used to hire a yet-to-be-determined number of extra staff at Veterans Affairs, which reports having seen a 60 per cent increase in the number of requests for disability benefits in the past three years.

Veterans Affairs Minister Seamus O'Regan said he has heard first-hand from former Forces members about the impacts the growing wait times have had on their lives, and that the government knows it has to do better.

"We just did five town halls in two days in New Brunswick, and that's when you see the face of backlog," he told The Canadian Press in an interview.

"You have a veteran at a microphone who's waited Lord knows how many months, and what do you do? You just stand there and go: 'We're trying.' And that's not good enough."

But the union representing Veterans Affairs workers says that while the money will certainly help fix some of the problems facing the department, more will be needed to undo years of Conservative-era cuts -- and to address future demand.

"The reality is that we were in a hole, and we're still in a hole right now," said Carl Gannon, national director of the Union of Veterans Employees.

NDP veterans affairs critic Gord Johns said he has pressed the government on how it came up with the $42-million figure and why the funds are only earmarked for two years, but that it hasn't offered any answers.

"When it's only for two years, they're not talking about replacing staff on a permanent basis," Johns said. "And the government needs to show an ongoing commitment to veterans with long-term funding and long-term stable resources and services."

Veterans Affairs was forced to lay off 1,000 employees -- about a quarter of its staff -- between 2012 and 2014 when the Harper government slashed government spending to balance the budget in advance of the last federal election.

About half that number have since been hired back, Gannon said, but many more are needed to address what has been a steady growth in demand for services and to implement the Liberals' new pension-for-life for disabled veterans.

While the government has said it has set aside separate money to specifically prepare for the pension-for-life measures, which is scheduled to come into effect next year, Gannon was nonetheless worried that it will exacerbate the existing problems.

"It's going to stress a system that's already stressed to the max," he said of the pension-for-life plan. "So right now, it's imperative that we repair the system before we start really trying to roll out anything."

O'Regan left the door open to adding more funds in the future as he acknowledged that the government has to stay ahead of demand for services, which will soon include offering disabled veterans what the Liberals are calling a pension for life.

"If we don't keep up with it, we're not going to be getting better at this," he said. "We are improving front-line services, but we have to keep ahead of it."