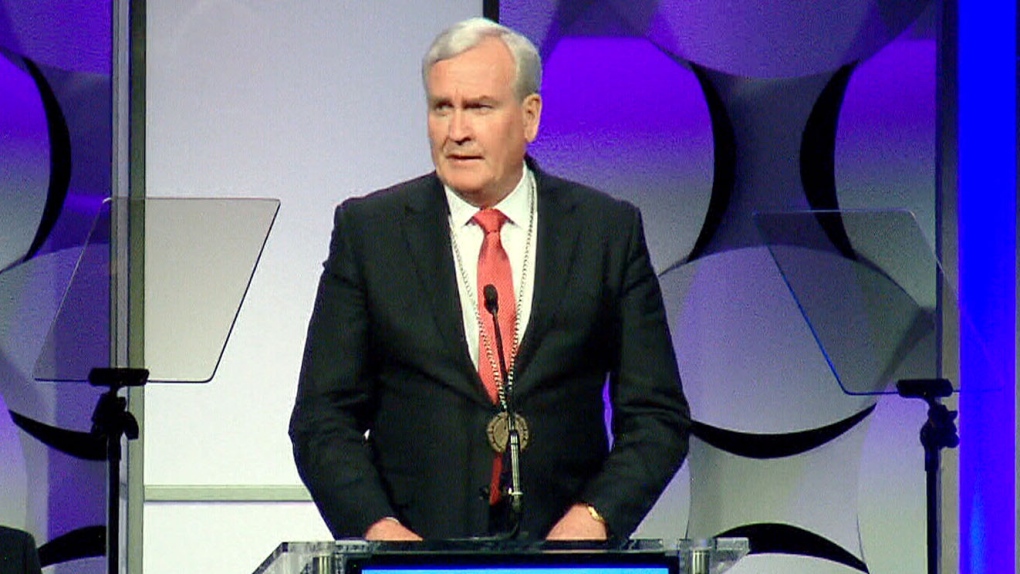 Former Parliamentary Sergeant-at-Arms Kevin Vickers speaks to the crowd after receiving a medal of valour from the Simon Wiesenthal Center at a ceremony in Los Angeles Tuesday, March 24, 2015.

OTTAWA -- It's the perfect setting for a spooky story: Glanmire House, nestled in an old part of Dublin, and the former home of one of the leaders executed after the 1916 Easter Rising. Now the official Canadian residence in Ireland, Ambassador Kevin Vickers says the elegant home is haunted.

"Ghosts. I never believed in ghosts. Until I arrived here," Vickers wrote recently on Facebook, where he has nearly 5,000 friends.

"I was sitting watching TV when all of a sudden I heard a heavy chain fall on the floor in the dining room," he wrote. "I immediately went there and there was nothing on the floor.

"A couple of weeks ago laying in my bed, I heard heavy footsteps coming up the stairs. And I could hear laboured breathing. I immediately went out to the hallway and nothing was there."

The maid at the official residence sometimes refuses to go upstairs, Vickers says.

The former sergeant-at-arms of the House of Commons, who spent 29 years in the RCMP, tied the ghostly presence to the home's history, where Irish revolutionary Patrick Pearse lived a few years before leading the Easter Rising a century ago.

"I wonder if it is he who walks the hallways of this residence," wrote Vickers, who himself dug into the residence's archives to confirm that Pearse had lived there from 1908 to 1912.

Pearse's role in Irish history isn't confined to his role in laying out a vision for a united, 32-county Irish Republic. He was also a poet and a proponent of Irish bilingualism, as well as an innovator in education who rejected corporal punishment and rote learning, said Gavin Foster, an associate professor in the school of Irish studies at Concordia University.

'One of the founding fathers' of Ireland

Pearse opened two schools, including a boys' school that was about a 10-minute walk from the now-Canadian residence, though the girls' school he opened lasted only two years.

But he's best known for helping kick off a rebellion that included taking over the General Post Office in Dublin. Pearse drafted and, from outside the post office, read the Proclamation of the Irish Republic. 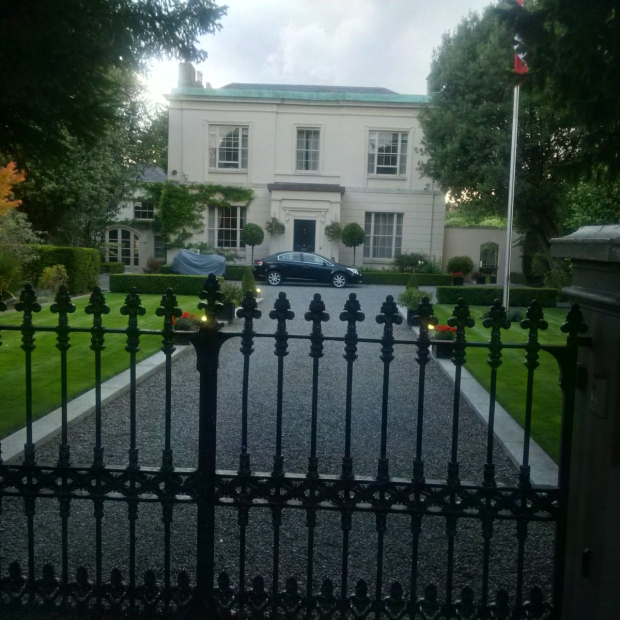 Glanmire House is shown in this undated image.

"Essentially he'd be seen as one of the founding fathers of modern Ireland," Foster said.

"He has huge significance in 20th century Irish history. The thing he's best remembered for would obviously be the critical role he played in planning and leading and then being executed after the 1916 Easter rising."

The rising was supposed to take place across Ireland, but poor communication and a lack of weapons meant it was more limited than that, Foster said. Within a week, the British had put down the rebellion. Pearse and 14 others were executed by a firing squad at Kilmainham Gaol.

It all leads to the ideal setting for a haunting.

"He's ghost-like in several respects -- the way these men died, violently with limited access to priests, and bodies mistreated and disposed of in the way they did in the felons' yard, might fuel some people's ghost stories about troubled ghosts," Foster said.

More metaphorically, he added, "the ghost of Patrick Pearse kind of haunts the Irish body politic."

"His revolutionary ideal was for a long time seen as kind of an inspiration for the state, but arguably the state has never lived up to it," Foster said.

"Because Ireland is partitioned, because the Gaelic cultural revival didn't flower to the extent that he had sought. Because some of the more radical social ideals in the proclamation about the people's ownership of all the land in Ireland is still something that hasn't been achieved... in that sense he's a ghost that troubles the nation because he articulated ideals that haven't been achieved."

Vickers declined an interview request, so it's not clear when the haunting sounds started happening. Adding a further connection between the residence and Pearse, it was at a commemoration of the 1916 rising that Vickers manhandled an Irish republican protester.

Coincidentally, Pearse wrote an essay called "Ghosts" just months before the fateful uprising. It laid out arguments by him and by previous revolutionaries in favour of an independent Ireland.

"Ghosts are troublesome things in a house or in a family," Pearse wrote in the preface.

"There is only one way to appease a ghost. You must do the thing it asks you. The ghosts of a nation sometimes ask very big things; and they must be appeased, whatever the cost."

Vickers said on Facebook that he's more than willing to prove his case.

"If anyone doubts the validity of this story, you are welcome to come and stay a night or two here. Just now I heard an unusual bang downstairs."