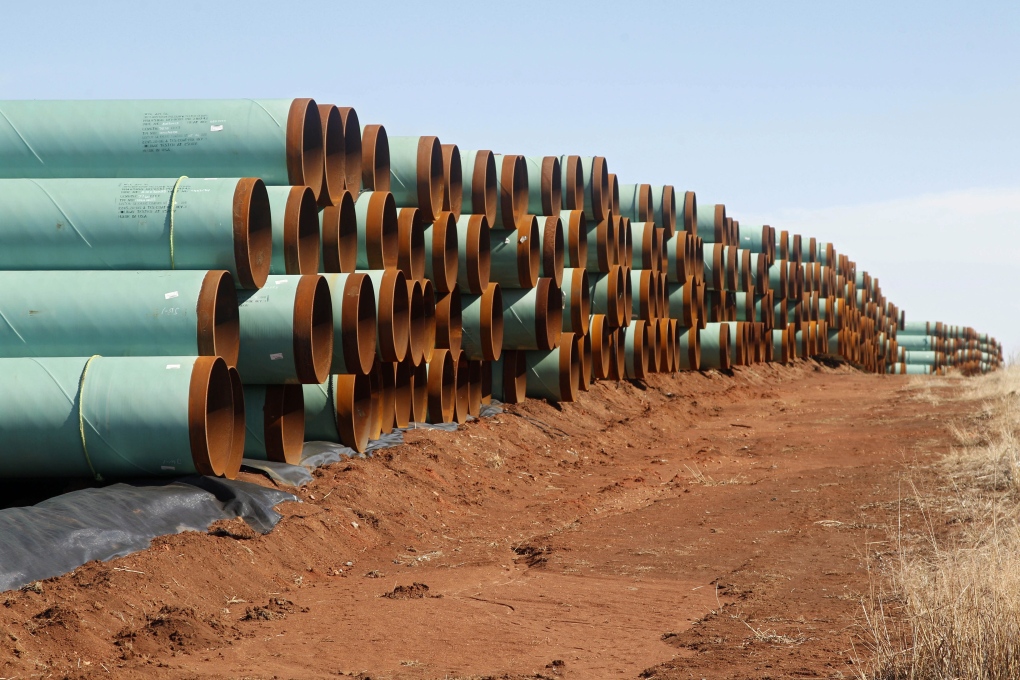 Kilometres of pipe ready to become part of the Keystone Pipeline are stacked in a field near Ripley, Okla. (AP / Sue Ogrocki)

WASHINGTON D.C. -- Canadian officials in both Washington and Ottawa say they're encouraged by what they're hearing about a forthcoming State Department report on the potential environmental impact of the Keystone XL pipeline.

The officials say they're being told the report could be ready for release within days and will bolster the case for the controversial energy project.

One source in Washington warned , however, that there won't be any "high-fiving and toasting with champagne" at the Canadian embassy just yet, given how prone the Keystone XL project has been to lengthy delays.

"What we're hearing is that it's going to be positive for the project -- and therefore positive for Canada," said the official, who spoke on condition of anonymity because he hadn't seen the report.

"The rumours certainly are that it's very thorough and that the analysis will support the project."

The process of writing the report began in August, the official said. With the threat of almost-certain lawsuits looming, regardless of what the decision is, the authors were under pressure to be as rigorous as possible, he added.

"What we need is an (environmental impact statement) that is so thoroughly done that it will stand up to litigation."

The report is the latest environmental impact statement on the $7-billion TransCanada project to come from the State Department, which has jurisdiction because the pipeline crosses an international boundary.

The last report, released a year ago, concluded the project would not significantly impact the rate of oilsands development or crude oil demand, nor would it pose any greater risk to the environment than other modes of transportation.

Obama has declared that he will only approve the pipeline if it can be shown that it will not significantly increase greenhouse gas emissions.

Natural Resources Minister Joe Oliver says he expects the forthcoming report to draw the same conclusions as the last one.

"There are no new facts on the ground," Oliver said. "So you know, it's to be expected that they would come out in the same way."

Once that occurs, the U.S. administration will conduct a 90-day review to determine if the project is in the national interest.

Another Canadian diplomat said to be wary of concluding that the report is imminent. Even if it's slated to come in the next few days, there's always a chance someone somewhere could hold up the report's release.

Gary Doer, Canada's ambassador to the U.S., wouldn't speculate on when the report might see the light of day.

"We have no certainty on the timing," Doer said in an interview.

But he expressed faith that the Canadian position would prevail: that the pipeline would be the safest, cleanest way to ship oil that will be transported to the U.S. one way or the other.

Referring to train accidents including the tragedy in Lac-Megantic, Que., Doer said events since the last State Department review had only served to reinforce the earlier conclusion.

"We believe that the facts have, regrettably, become only stronger on oil vs. rail," he said. "We believe that (the earlier conclusion by the State Department) will be maintained: higher cost, higher (greenhouse gases) without a pipeline."