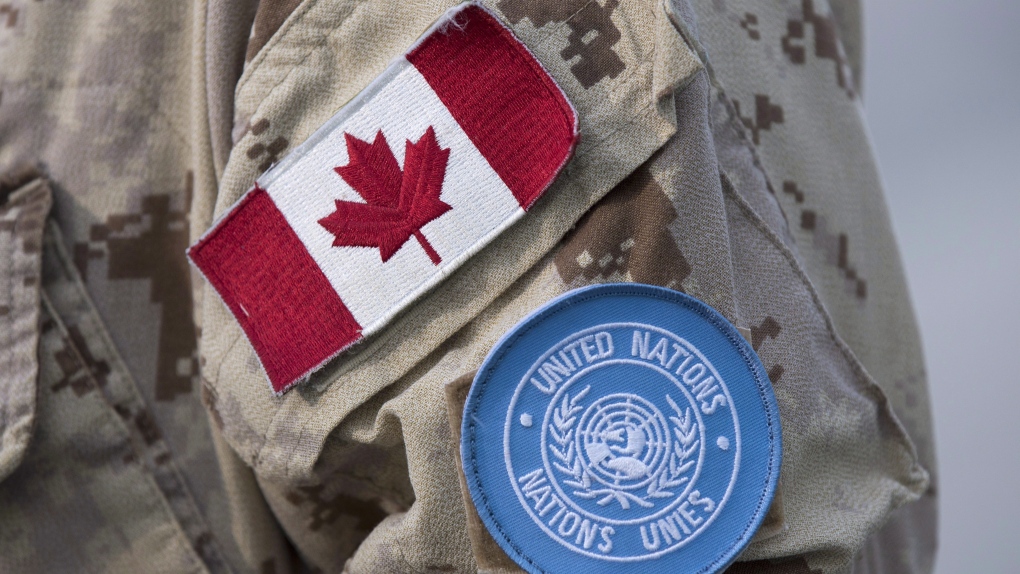 Canadian flag and the UN flag is shown on the sleeve of a Canadian soldier's uniform before boarding a plane at CFB Trenton in Trenton, Ont., on July 5, 2018. THE CANADIAN PRESS/Lars Hagberg

OTTAWA -- Canada will provide a military transport plane to support United Nations peacekeeping missions for another year despite losing its bid for a temporary seat on the UN Security Council.

Defence Minister Harjit Sajjan's office confirmed the continued deployment of a CC-130 Hercules in support of UN missions in Africa on Sunday, ending months of speculation about the fate of the mission.

"The Canadian Armed Forces are playing an important role in transporting critical supplies and personnel to support the UN in the region," Sajjan's spokesman Todd Lane said in a statement to The Canadian Press.

"We understand the importance of Canada working with our international allies and partners like the United Nations, which is why we have renewed Canadian Armed Forces support for an additional year."

The Hercules, which has been based out of Uganda five days per month since August 2019, was one of three signature promises that Prime Minister Justin Trudeau made to the UN when Canada hosted a major peacekeeping summit in November 2017.

Trudeau also promised the UN that Canada would provide a helicopter detachment, which operated in Mali from June 2018 to September 2019. He also pledged a quick reaction force comprised of up to 200 troops, which has yet to be fulfilled.

Many saw the promises as an attempt by the Liberal government to bolster its bid for a two-year seat on the UN Security Council, and there had been questions about the CC-130 after Canada lost to Norway and Ireland on the first ballot in June.

Lane also revealed that the Hercules recently resumed flights to and from Uganda after a four-month suspension due to COVID-19.

"Following a temporary operational pause due to COVID-19, the tactical detachment in Uganda has recently completed a 10-day mission out of Entebbe," he said. The plane moved about 42 tonnes worth of cargo and 400 passengers, he added.

Canadian Forces College professor Walter Dorn, one of Canada's foremost experts on peacekeeping, welcomed the extension, which he described as "pioneering" since the plane isn't assigned to one specific UN mission but helps many in Africa.

"It's a pioneering service," he said. "The first national contribution for multi-operation air service in UN history, with operations in the Democratic Republic of Congo and South Sudan already serviced and other missions to be added."

Dorn nonetheless lamented that the Hercules is only available for five days a month even as he noted that Canada's overall contribution to peacekeeping remains at an all-time low with 34 police officers and military personnel around the world.