Behind the scenes: Why Trump changed his mind on NAFTA

WASHINGTON, D.C. -- The call came in yesterday around dinnertime -- top staff at the Prime Minister’s Office were notified President Donald Trump had a “one-hour window” to speak about NAFTA.

Already worried about strained Canada-U.S. trade relations, Langevin Block was caught off guard hours earlier after U.S. media reported the Trump administration would start the process to withdraw from the trade accord, rather than try to renegotiate it. It was a worrying prospect for a PMO that spent months on a U.S. “charm offensive” -- only to see it fall flat.

Eager to respond, the PMO kicked into overdrive.

One senior official said they were driving home from work and pulled into an empty parking lot to patch into a secure line through the PMO switchboard, which in turn patched through to the White House.

Trump would hold separate calls between the Canadians and the Mexicans.

Prime Minister Justin Trudeau stressed to Trump that cancelling the trade accord would affect thousands of Canadian jobs that rely on the measures outlined in the free-trade agreement. Speaking to reporters in Saskatchewan today, Trudeau gave a glimpse into the conversation:

"I highlighted... a disruption like cancelling NAFTA, even if it eventually, theoretically might lead to better outcomes, would cause a lot of short and medium term pain for an awful lot of families."

Trump, sources say, expressed surprise on the call that Canadian jobs would be lost by the termination of the accord, which led the president to soften his approach and a late-night decision to renegotiate.

It was Trump’s concern that opened a new discussion line between the two countries, and the PMO immediately seized upon it.

Trudeau’s top advisors spent today in Washington. Gerald Butts and Katie Telford joined Canada’s ambassador to the U.S., David McNaughton, to meet with various Trump officials in the West Wing, the Department of Commerce, and the Office of the U.S. Trade Representative. Several other meetings would go late into the day. 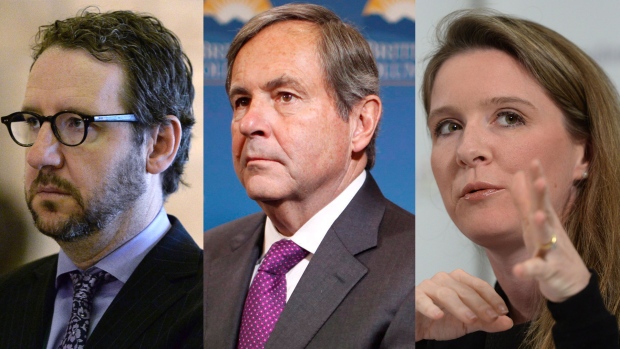 Gerald Butts, Katie Telford and David McNaughton are seen in this composite image. (THE CANADIAN PRESS)

Trump was initially pushed to sign off on withdrawing from the accord instead of renegotiating from Peter Navarro, the head of the National Trade Council.

Inside U.S. Trade reported Navarro wrote an Executive Order that would take first steps in the process, noting Trump is “under pressure to follow through on core campaign promises -- which included the renegotiation or withdrawal of NAFTA -- and appeal to his base as a 100-day milestone draws near. Playing hardball on NAFTA may be his way of swinging for the fences.”

But sources say Trump softened the hardline approach after getting counsel from his son-in-law, Jared Kushner, who advised him to pursue a renegotiation instead. Kushner sat in in on the president’s call with Trudeau. Navarro did not. 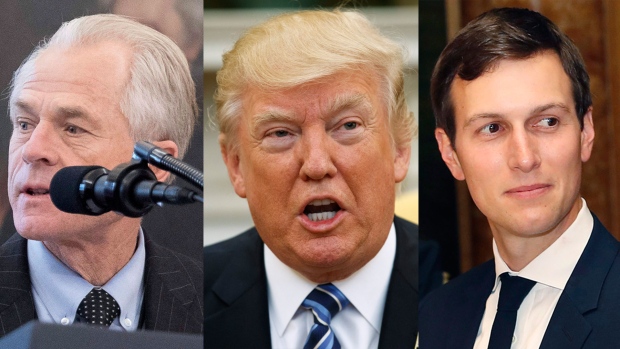 Canada is also test-driving a new narrative with administration officials to resolve the ongoing softwood lumber dispute: Trump could reach a settlement, much like former President George W. Bush -- something President Obama failed to do.

That message seems to be well received inside the West Wing.