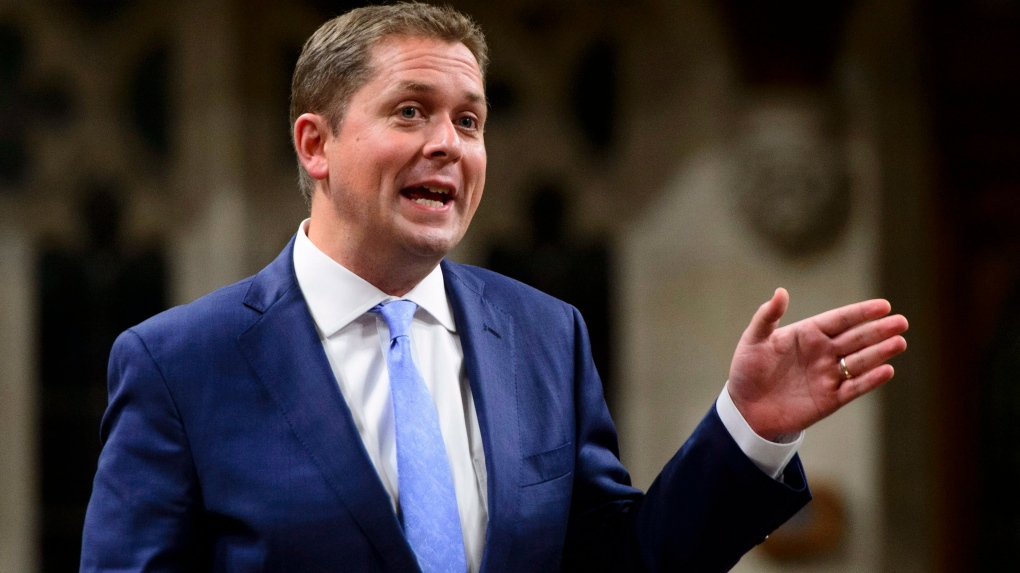 Conservative Leader Andrew Scheer stands during question period in the House of Commons on Parliament Hill in Ottawa on Wednesday, Sept. 19, 2018. (THE CANADIAN PRESS/Sean Kilpatrick)

OTTAWA -- Conservative Leader Andrew Scheer says if the Liberal government is serious about developing the energy sector and getting oil resources to market, it will re-engage in discussions with TransCanada about the abandoned Energy East pipeline project.

In a heated exchange between Scheer and Prime Minister Justin Trudeau in question period Wednesday over the future of the Trans Mountain pipeline expansion, Scheer brought up the other energy project, which was cancelled last year.

If the government really wants to develop Canada's energy sector and get resources to market "they will invite Energy East back to the table," said Scheer.

While Trudeau initially deflected, he later said that in the case of Energy East, a private company determined it did not want to pursue the project because oil was at half the price it had been when the initiative was first proposed.

"It actually never reached a point where we could have weighed in on it one way or another because they withdrew the project, because they also had another pipeline going south that they had trouble filling the space on," Trudeau said.

Last month the Federal Court of Appeal quashed approval of the Trans Mountain project, saying the government consultation with Indigenous communities was inadequate and criticizing the lack of attention paid to the environmental impact of increased tanker traffic off the coast of British Columbia.

Scheer's Conservatives have been calling the last few months the prime minister's "summer of failures," with the Trans Mountain pipeline high on the list.

During an open caucus meeting earlier Wednesday, Scheer addressed his words to Trudeau in telling his party the prime minister approved a pipeline he had no intention of backing.

"Oh, how you have failed on Trans Mountain."

Scheer highlighted Trudeau's challenges and said Canadians are worrying tomorrow might not be better than today, adding, "Their story is Leona's story."

Scheer lost a prominent member of the Conservative party this summer, but seems to have changed the narrative this week by welcoming former Liberal MP Leona Alleslev into the fold.

He highlighted Alleslev's decision to cross the floor and flagged Richard Martel's recent byelection victory for the Conservatives in Quebec.

But there was no mention of Maxime Bernier -- the Quebec MP who announced Aug. 23 he was leaving the Conservative party and starting his own political movement, calling his former leader and colleagues "intellectually and morally corrupt" as he slammed the door on his way out.

Conservatives were livid at Bernier's move and have argued that adding another party on the right side of the political spectrum will split the vote and allow the Liberals to easily win another majority government.

But if Scheer is harbouring any worry over Bernier's power-play move, it did not show Wednesday.

Instead, Scheer focused on Alleslev, calling the Toronto-area MP accomplished, principled and courageous -- qualities he said don't count for much "if you're a Liberal."

Alleslev thanked caucus for making her feel "valued" and said she is overwhelmed by the support she has received from her constituents and the public.

Alleslev says her concerns about the Liberal government's handling of crucial files such as the economy and trade were met with silence, prompting her to leave.