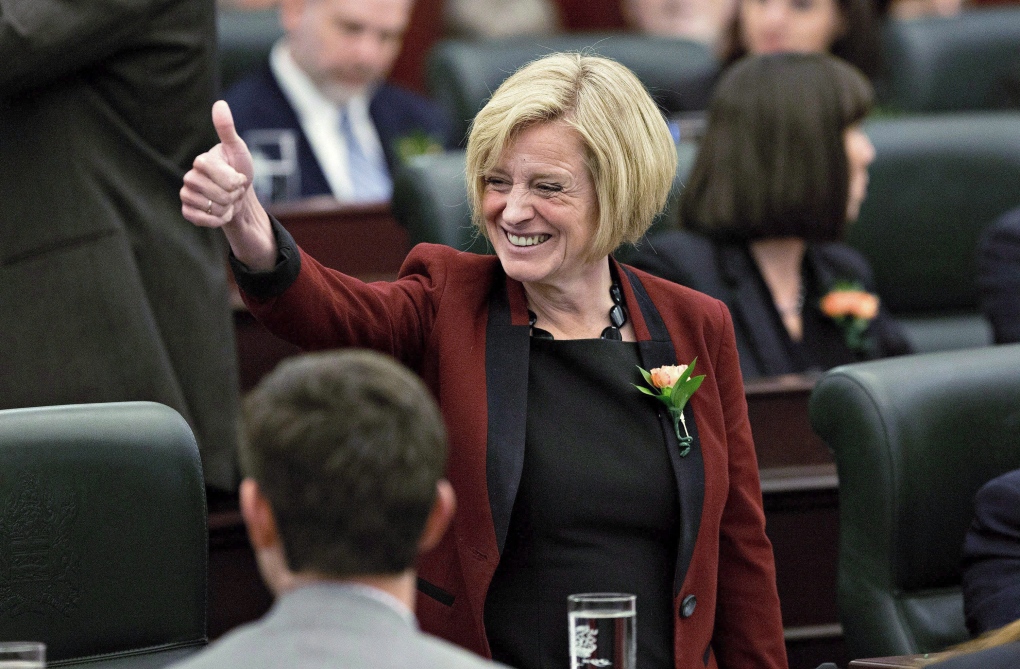 Alberta Premier Rachel Notley gives a thumbs up to the crowd before the speech from the throne in Edmonton, Alta., on June 15, 2015. (Jason Franson / THE CANADIAN PRESS)

EDMONTON -- The flagship first bill of Alberta's new NDP government that bans corporate and union donations to political parties has passed in the legislature.

Opponents, however, say much work remains to be done to close the loopholes.

Bill 1, An Act to Renew Democracy in Alberta, passed unanimously in third reading late Monday night, and when signed into law will ban donations retroactively to June 15.

"It puts the power back in the hands of Alberta citizens rather than those with the deepest pockets in terms of determining the political future of this province," Justice Minister Kathleen Ganley said Tuesday.

Ganley acknowledged there was criticism of the retroactive cutoff date, tied to when the bill was introduced in the house.

But she said the NDP had signalled for months that it wanted to end the donations, and it was crucial to not give anyone unfair advantage through a last-minute rush of donations.

"I think there was sufficient notice," said Ganley. "I think it was the right way to put it through."

The bill received all-party support, including votes from the opposition Progressive Conservatives, who have traditionally received most of their donations from corporations.

The NDP has accrued about 10 per cent of its contributions from unions.

PC Leader Ric McIver said an amendment, proposed by the Wildrose and passed by the house, to block a loophole allowing unions and corporations to make loan payments to political parties, made the bill more palatable.

A week ago, McIver denounced the bill during a news conference.

At that time, he told reporters the bill would tilt the fundraising playing field in favour of the NDP.

He also said the bill would not stop corporate donations but would simply see business people use loopholes to get around the rules.

"We were pleased that the bill passed. It will strengthen the democratic process for all Albertans," said Jean in a statement.

"However, we are very concerned that the NDP government left two significant loopholes."

Government house leader Brian Mason said the bill is just the first step toward broader democratic reforms that will soon be examined by a new legislature committee.

"There will be plenty of time on an all-party basis to examine all of those issues," he said.

The bill keeps individual donation limits at $15,000 a year.

Alberta Party Leader Greg Clark tried to get that donation limit reduced to $5,000 a year, but the motion was defeated.

There was also debate over who fostered the idea of political donation reform.

Premier Rachel Notley told the house late Monday that Wildrose is wrong to claim the idea was theirs.

Notley said it was NDP policy when she joined up in 2008.

"Unless you've entered a whole new space-time continuum, I think you really, truly have to rethink this notion that the idea was yours and we took it because, in fact, that is not the case."