Airline passengers from the Middle East and countries where most people are black are more likely to face luggage searches or additional questioning by Canada Border Services agents than other travellers, a CTV News investigation has found.

People from Africa and the Caribbean arriving in Canada by air were last year flagged for secondary inspection for customs reasons nearly four times as often as citizens of European Union countries, CTV’s analysis of CBSA data shows.

More than 13 per cent of passengers with passports from Middle Eastern countries, and 11 per cent from African or Caribbean nations, were pulled aside for customs issues.

But only 2.7 per cent of EU citizens were flagged for customs review. 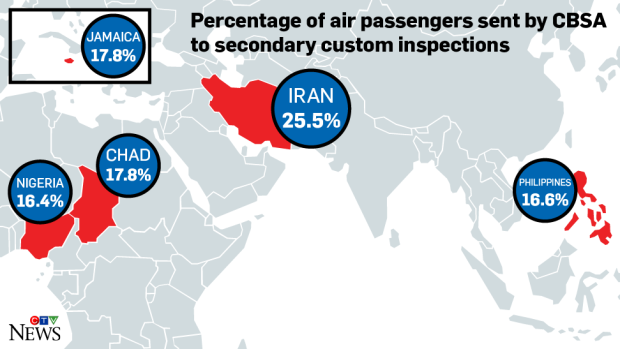 The CBSA denies that it conducts racial profiling when it decides to send a passenger for secondary inspection.

“All persons, including Canadian citizens, seeking entry to Canada are subject to the same rules and regulations regardless of nationality, race and/or gender,” CBSA spokesman Jayden Robertson said in an email.

“Secondary examinations are part of the normal cross-border travel process.”

Airport passenger arrival records suggest, however, that the CBSA is less likely to perform additional screening on passengers from countries where most people are white.

Visitors from Nordic countries were subject to some of the lowest rates of screening, with only 1.4 per cent of visitors from Iceland and 1.9 per cent from Denmark pulled over for luggage searches or further customs review.

Under the Access to Information Act, CTV News obtained a database tracking more than 34 million air passenger arrivals in Canada for 2017. The records do not indicate the race or the ethnicity of the passenger but they do track citizenship and whether visitors were subject to additional scrutiny for customs, immigration, or carrying large amounts of cash.

The data also show that Canadians returning home get greater scrutiny from customs agents than U.S. citizens who fly to Canada.

About 4.8 per cent of Canadians were referred for secondary customs screening, compared to 2.4 per cent of Americans, 2 per cent of U.K. citizens and 2.9 per cent of French nationals.

Over 17 per cent of Jamaican nationals were sent to customs inspections and they had a nearly 50-50 chance of being sent for follow-ups with CBSA officers for either customs or immigration issues when they arrived at Canadian airports.

"There doesn't seem to be any logical reason to have such a high statistical number for people being checked,” said Stephen Benjamin, a Toronto lawyer who practices immigration law.

"It can be quite frustrating, especially if you're a citizen, to be landing in Canada after a five-hour flight to be sent through the wringers for absolutely no reason, other than where you came from."

Visitors from Iran were scrutinized the most closely, sent to secondary screening 10 times as often as Canadians.

'It's absolutely my experience'

The National Council of Canadian Muslims says the data confirm what it hears repeatedly from travellers -- that Muslims are subject to far greater scrutiny from security agencies, especially since the 9/11 attacks.

“We get calls every other day, almost, from Muslims -- both Canadians and foreign nationals -- who are accessing our airports and coming in through our borders and are subject to more questioning than the average person,” said communications coordinator Leila Nasr.

“Often people can be pulled aside, seemingly based on what is perceived to be their religion or their race or ethnicity.”

CBSA said it could not confirm CTV’s analysis of the data. But the department said there are numerous reasons why a passenger might be sent for secondary inspection, including health checks, document validation and for payment of duties and taxes.

Some travellers say race also appears to be a factor in pre-flight security checks.

Steve Gardner, a school principal in Stouffville, Ont., who is black, says he has repeatedly been subject to additional screening at security checkpoints. His wife, who is white, rarely gets searched, he says.

“I probably can’t think of a time when we go through security when they haven’t said, ‘Sir, can you put your hands out’” for a swab check.

“It’s absolutely my experience that it’s part of the process that my check will look a little different than my wife’s.”