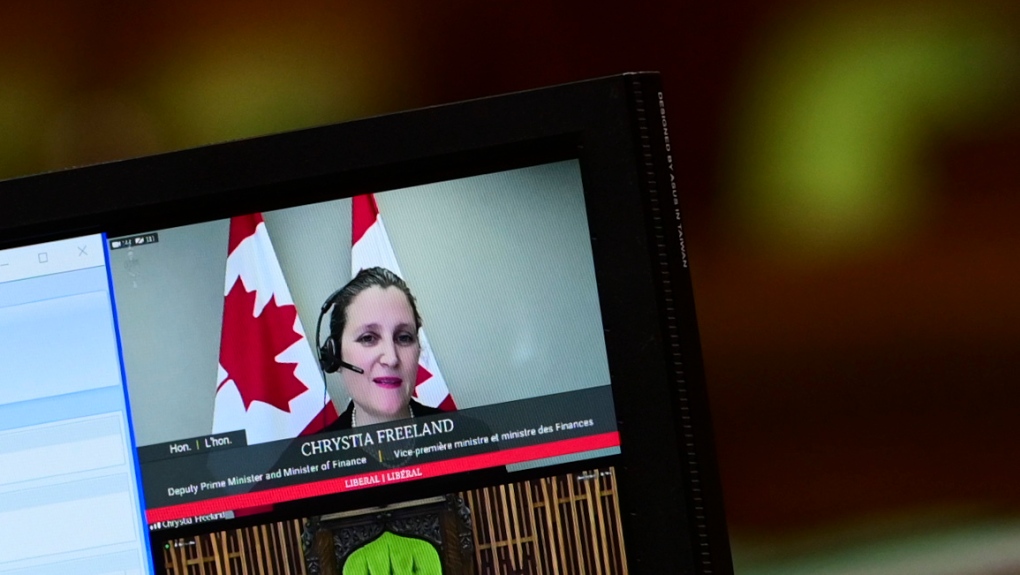 Minister of Finance Chrystia Freeland is pictured on a clerks computer screen as she rises virtually during question period in the House of Commons on Parliament Hill in Ottawa on Thursday, Feb. 4, 2021. THE CANADIAN PRESS/Sean Kilpatrick

OTTAWA -- Members of Parliament embarked on a historic first in the House of Commons Monday: placing their votes electronically through a new app system.

It is the latest in COVID-19 alterations to parliamentary business, and one that’s been many months in the making.

Promised as a technique only to be adopted in pandemic times, it kicked off with two votes on Monday afternoon that went off as smoothly as all sides could have hoped, free from some of the earlier virtual challenges experienced in adapting to a hybrid House of Commons.

All at once, MPs participating remotely used their phones to press yea, nay, or abstain, while MPs in person stood to be counted. As the process unfolded the public could watch along on the House of Commons feed or online, as each vote came in and the tally grew.

With just a couple of MPs having issues electronically registering their votes—all of whom were still able to vote through the preexisting video voting platform— from start to finish the process for the first vote took 14 minutes.

The first vote to be taken this way was on the Bloc Quebecois opposition day motion asking the government to increase the Old Age Security benefit by $110 a month for those aged 65 and more in the 2021 budget, which opposition MPs passed without the support of the Liberals.

This was followed by a second reading vote on the government’s Bill C-14, implementing the new measures from the fall economic statement, which passed with no MPs experiencing issues during the voting period though some concerns were raised after the fact.

“Voting is one of the most fundamental rights of a member of Parliament. The ability of members to participate fully in this process is of the utmost importance. This first hybrid vote using the electronic voting system marks another adaptation of our normal practices and procedures in response to the COVID-19 pandemic,” said House of Commons Speaker ahead of the vote.

A move pursued by the governing Liberals, the House of Commons administration worked on the voting-by-app system for months.

This new way to vote will speed up the process as it had been conducted virtually in a modified rollcall through Zoom, which had sometimes lasted closer to an hour, going from member to member.

The app had prompted some security concerns and hesitation from political observers who wanted to continue to see MPs stand up and be counted, so to speak, rather than be a number in a tally.

The House sought to address this by putting in place a range of security and authorization measures including:

MPs participating in-person will continue to be able to cast their votes by standing up in the Chamber at the beginning of each vote. MPs who are having technical difficulties registering their votes through the app will be able to revert back to the virtual voting platform that’s been in place since last fall by using the “raise hand” feature. MPs are also being allowed to change their vote if they made the wrong selection, so long as the new vote is processed within the voting window.

To be notified that a vote is about to take place the bells will ring in the House of Commons as usual, but MPs receive alerts through their parliamentary email addresses and via push alerts. At the end of each vote the tallies are continuing to be published and recorded in the same way votes traditionally are marked.

Canadians can watch the electronic votes come in on the House of Commons website and through the usual broadcast of House proceedings. At the end of each vote the tally will be published and recorded in the same way votes traditionally are marked.

The terms of the new app voting system were agreed to at the start of the 2021 hybrid sitting agreement, which is in place until the end of the spring sitting scheduled for June 23. The hybrid agreement allows MPs to continue to be allowed to participate in House business either in-person in Ottawa, or by logging in remotely from their riding.

Work began on finding an electronic platform for MPs to cast their votes on began this summer, though the conversation generally about electronic voting has come up pre-pandemic with the idea being explored in relation to the ongoing Centre Block construction project.

Before the new system was adopted test votes with all members had to be completed and the Speaker needed to receive notice from the House leaders of all recognized parties stating that they were satisfied that the remote voting application was ready for prime time.

Following the votes, Chief Government Whip Mark Holland thanked the House of Commons administration for their work to help MPs to meet the challenge of keeping Parliament running during the pandemic.

“What we just saw in that last vote was not a single technical error, an absolute flawless execution of an incredibly difficult task. And, we were able to watch for months as House administration not only helped us in this incredible change, but deal with the adaptations as a result of COVID across the board,” Holland said, also thanking the opposition party whips for their collaboration.

And here’s how it appears on the broadcast, a rotation of showing who is voting in which way. pic.twitter.com/lqjnuF22Ze