PMO won't comment on lockout where he touted tax cuts 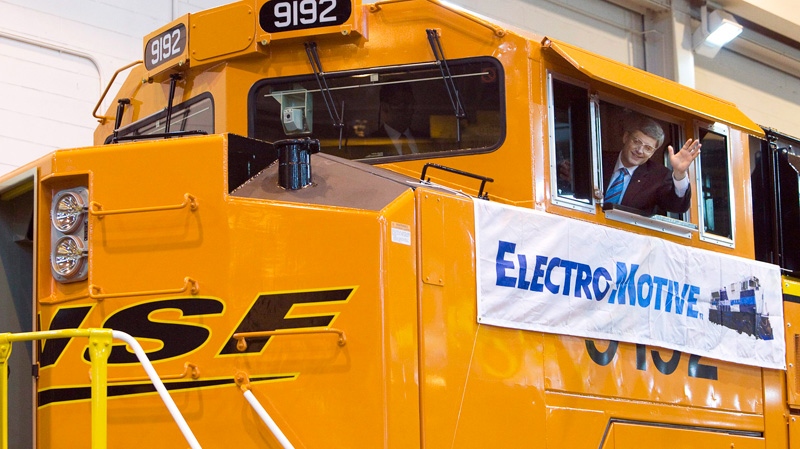 Prime Minister Stephen Harper waves from the cabin of an engine at Electro-Motive Diesel in London, Ont. on Wednesday, March 19, 2008. (Frank Gunn / THE CANADIAN PRESS)

OTTAWA - The Conservative government is washing its hands of a nasty labour lockout at a locomotive plant in London, Ont., that was once used by Prime Minister Stephen Harper as a backdrop to tout business tax breaks.

Electro-Motive Canada locked out 420 workers on Jan. 1 after making a take-it-or-leave-it offer that the union says included a 55 per cent wage cut and other concessions.

"This is a dispute between a private company and the union and we don't comment on the actions of private companies," Harper spokesman Carl Vallee responded Wednesday in an email.

The prime minister showed no such reticence on Mar. 19, 2008 when he visited the Electro-Motive plant to showcase a $5 million federal tax break for buyers of the diesel locomotive-maker's wares and a wider $1 billion tax break on industrial capital investment.

"The prime minister's (2008) announcement related to the government's tax policies for all companies," Vallee said in the email. "A low tax environment is the best way to ensure job creators come to Canada and stay in Canada, as proven by the nearly 600,000 jobs created in Canada since July 2009."

A spokeswoman for Labour Minister Lisa Raitt repeated the same talking points in an emailed response.

When it was pointed out that Raitt aggressively intervened when privately-owned Air Canada was at war with its unionized workers last year, Ashley Kelahear responded that the Electro-Motive dispute "is in fact a matter of provincial jurisdiction."

Ken Lewenza, president of the Canadian Auto Workers which represents the unionized Electro-Motive employees, said the prime minister has a duty to make his views known.

Lewenza, fresh from a visit to the picket line at the London plant, said retirees and other workers there recounted Harper's 2008 visit.

"Mr. Harper went around, shook workers' hands and indicated to workers that they had a great future as a result of his announcement," Lewenza said in an interview.

"For him to pass this on as a bargaining dispute between the employer and the union is ridiculous. How do you hand a (corporate) partner a nice big cheque and then say, by the way, there's no ground rules relative to the cheque."

Questioning unions has become a staple of the Conservative party's fundraising pitches over the past year and Lewenza wondered aloud whether Raitt and Harper would remain quiet had the CAW demanded a 50 per cent share of all Electro-Motive profits at the bargaining table.

"The prime minister of Canada and the minister of labour would very easily denounce that kind of aggressiveness of the union," said the CAW president.

"For him not to stand up when the role is reversed, quite frankly, is abandoning Canadian workers -- and I don't care if it's unionized or unorganized."

Lewenza says Caterpillar's lead negotiator, with 37 years at bargaining talks, conceded he had never before proposed such dramatic cuts -- nor ever heard of similar demands being made elsewhere.

"This is unprecedented in every way," said Lewenza, "and admitted so by Caterpillar themselves."

The Canadian Union of Public Employees, or CUPE, issued an open letter to the prime minister Wednesday demanding to know what, if any, conditions the government set under the Investment Canada Act when a subsidiary of Caterpillar bought Electro-Motive Diesel in 2010.

However Industry Canada says the sale was not subject to review under the act, because the asset value didn't meet the required threshold.

Paul Moist, CUPE's national president wrote that the Conservative government appears "to act solely in the interests of business and the wealthy."

"In two recent private sector labour disputes your government cited the economy as justification for intruding on workers' rights under the Canada Labour Code and denying their right to strike," wrote Moist.

"So far this year we have two private sector employers (one in Quebec and one in Ontario) who have opted to lock out their employees, yet your government has been silent on these disputes."

Aluminum giant Rio Tinto Alcan locked out 800 workers at its smelter in Alma, Que., this week after contract talks collapsed.