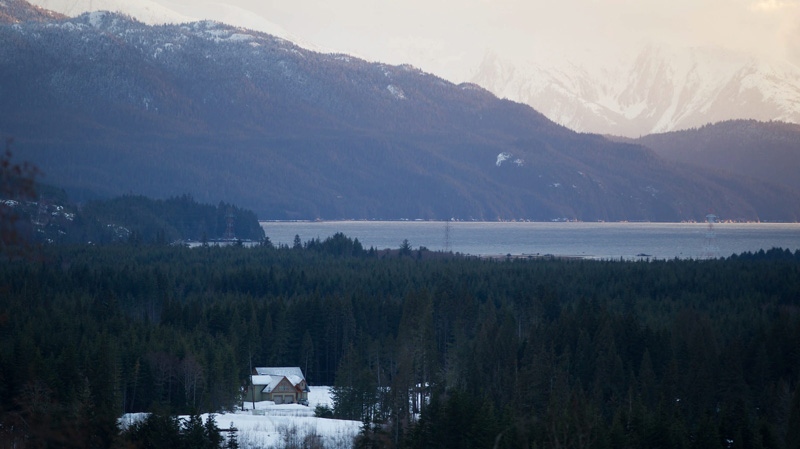 A home is pictured near Douglas Channel, the proposed termination point for an oil pipeline from Alberta in Kitimat, B.C., on Monday January 9, 2012. THE CANADIAN PRESS/Darryl Dyck

HAZELTON, B.C. - Gilbert Johnson proudly pounds his fist against the piece of plywood he nailed over the doors of the Gitxsan Treaty Society Office last month.

"I nailed it shut on the evening of Dec. 5," he said Thursday. "We're waiting for our key."

Johnson is among the Gitxsan aboriginals huddled beside an open fire in protest of the decision by one of their hereditary chiefs to sign a deal with Enbridge Inc., (TSX:ENB) in support of the Northern Gateway pipeline proposal.

Hearings into the $5.5 billion pipeline began this week in Kitimat, B.C., where emotional aboriginal chiefs told panelists the pipeline threatens British Columbia's pristine coast and their way of life.

The hearings into the proposal moved on Thursday to Terrace, B.C., but the protesters who have spent 37 days outside the Gitxsan treaty society office have stayed.

Johnson said they don't plan to leave until the deal between hereditary Chief Elmer Derrick and other local leaders and Enbridge is scrapped.

Derrick works for the Gitxsan society that is trying to negotiate a treaty with the provincial and federal governments.

But a group representing other hereditary chiefs has said Derrick does not speak for the community, which has already been divided over the direction of treaty talks.

Johnson said Derrick has not been seen recently.

"We've been hearing that he's been in Kitimat. That he's been in Las Vegas. We've heard so many things. Ourselves, personally, where Elmer is doesn't bother us, as long as he isn't here."

Johnson held up a poster that shows Derrick and an Enbridge official. The poster read: "Who really signed the Enbridge deal?"

Enbridge is offering aboriginal bands that sign on with support an equity stake in the pipeline.

When Derrick announced the agreement with the company last month, he heralded his community's "trusted" relationship with Enbridge and estimated the deal would be worth at least $7 million for the Gitxsan.

But opponents of the deal say members of the Gitxsan nation weren't consulted and that Derrick had "embarrassed and shamed the Gitxsan people by undermining the 61 First Nations who are opposed to the project."

The 33,000-square-kilometre Gitxsan territory sits north of Northern Gateway's proposed route, but the line would cross six streams that feed into a lake the First Nation relies on for fishing.

Enbridge has offered equity stake agreements to 50 First Nations groups, although the Gitxsan was the first to sign.

The company claims a number of other communities are prepared to sign, but hasn't said which ones or when that would happen.