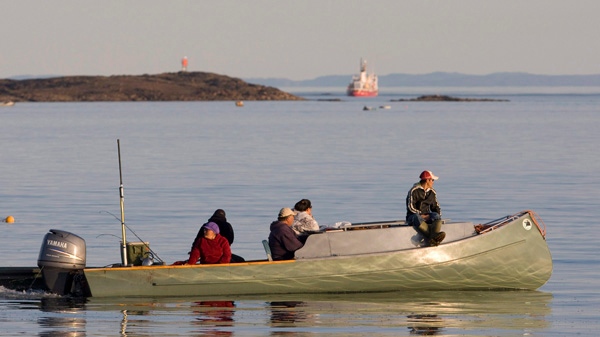 Inuit fishermen make their way along the bay in their boat in Iqaluit, Nunavut, Friday, August 21, 2009. (Jonathan Hayward / THE CANADIAN PRESS)

INUKJUAK, Que. - Larry Audlalak wasn't quite three years old when his family finally gave in to the insistent promises of the RCMP officer and left their comfortable lands along Hudson Bay's northern coast for the frigid unknown of the High Arctic.

The memory is with him yet.

"It was very bad," said Audlalak, one of the surviving "High Arctic Exiles" to whom the federal government finally apologized Wednesday.

"It was very cold, we had no shelter. We had to fend for ourselves for the first two years living in tents.

"The RCMP were able to give us some old buffalo hides and some reindeer hides for insulation."

Minister of Indian and Northern Affairs John Duncan travelled to Inukjuak in northern Quebec to say 'sorry' to Audlalak and others like him for a policy some say was a move to reduce welfare costs and reinforce Canadian sovereignty.

"We would like to express our deepest sorrow for the extreme hardship and suffering caused by the relocation," reads the text of his speech.

"The Government of Canada deeply regrets the mistakes and broken promises of this dark chapter of our history and apologizes for the High Arctic relocation having taken place."

In 1953 and 1956, 87 Inuit from 19 families were moved 2,000 kilometres from the relatively warm and lush environs of Inukjuak to what is now Resolute and Grise Fiord, the two most northerly communities in Canada.

The weather averaged 20 degrees colder. The sunless winter and perpetual daylight of summer were new. Game was hard to find, especially with no local knowledge. And promised assistance from the federal government didn't materialize.

"They say my father became listless," Audlalak said. "He was a broken man. (The move) killed my father."

After his speech, Duncan said the government was sorry both for the broken promises and for the policy itself.

"And we're apologizing for the relocation itself. We just think that it was an inappropriate thing to do."

John Amagoalik, one of the original negotiators of the Nunavut land claim whose family was relocated to Resolute in 1953, welcomed Duncan's words.

"I think this gesture is important," he said.

"If the government is finally acknowledging what happened was a mistake and it resulted in a lot of suffering for the families who were basically abandoned on the shores of Resolute Bay, it's an important apology."

Still, Amagoalik said it should have been delivered by Prime Minister Stephen Harper, not Duncan.

Amagoalik said the first years in Resolute were just as hard as they were in Grise Fiord. That privation showed in their wasted faces and bodies when the next group of relocatees arrived in 1956.

"I remember my cousin George tugging at his mother's skirts and saying, 'Mother, they look like ghosts,' " Amagoalik recalled. "The first two years were a very hungry time."

In 1996, the federal government agreed to pay $10 million into a trust fund for the relocatees and their children. That trust fund has since been crippled by years of poor returns and can no longer pay even its own costs, let alone compensation. A Quebec judge has been asked to allow trustees to divvy up nearly half the remaining cash among the 34 aging survivors.

Documents show federal officials were concerned that Inuit were depleting Inukjuak's resources. The government also wanted to keep its welfare costs down by keeping Inuit as self-sufficient as possible and sent RCMP officers into the Inuit camps to convince some of them to move.

As a side benefit, having Canadian civilians living in an otherwise unoccupied area bolstered Canadian sovereignty at a time when other nations, especially the United States, were expressing increasing interest in the Arctic as a possible front in the Cold War with the Soviet Union.

"Americans were running around all over the Arctic," Tester said.

Duncan's speech didn't address the reasons behind the relocations.

"The current government has no way to determine what the government of the day was motivated by," he told reporters.

Tester said the "High Arctic Exiles" have become a symbolic issue in the North of a time when Inuit were ordered around by anyone white and the entire region was run like a colony.

"It has an emotional ring to it because it speaks to a colonial history," Tester said.

That memory is still alive, apparent in the recent angry Inuit reaction to plans for seismic testing in Lancaster Sound that were made without adequate consultation of local communities.

"The Government of Canada and Inuit have accomplished many great things together, and all Canadians have benefited from the contributions of Inuit to our culture and history," he said.

"We must continue to strengthen our connections and deepen our understanding and respect."