One egg has more cholesterol than Double Down 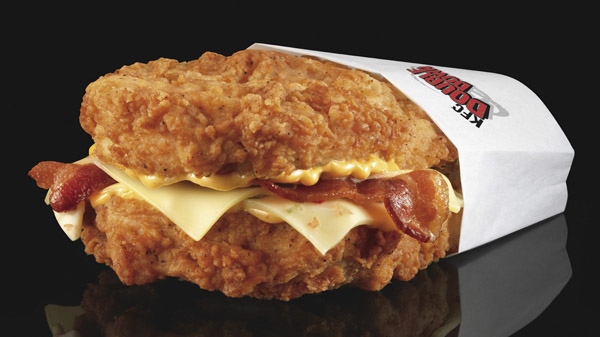 For anyone watching their cholesterol, Canadian researchers say eating a single egg could be more harmful than munching the current king of fast food indulgences.

According to a new report published in the Canadian Journal of Cardiology, one egg yolk can contain more cholesterol than a KFC Double Down sandwich.

Compared to the 150 milligrams of cholesterol contained in the now-famous sandwich comprised of bacon, cheese and sauce sandwiched between two pieces of deep fried chicken, researchers say a single egg can contain between 215 and 275 milligrams. A Big Mac contains just 75 mg of cholesterol, while a footlong meatball sandwich from Subway packs 90 mg.

Patients who are diabetic, have high levels of "bad" LDL cholesterol or are considered at risk of cardiovascular disease are advised to limit their total dietary cholesterol to less than 200 mg per day.

Otherwise healthy people are advised to consume no more than 300 mg each day.

"We wanted to put cholesterol into perspective, as there's been a widespread misconception developing among the Canadian public and even physicians, that consumption of dietary cholesterol and egg yolks is harmless," Dr. Spence said in a statement. "Much of this has to do with effective egg marketing."

In light of conflicting advice concerning the benefits of regular egg consumption, the study's authors say people need to weigh their own health risks when deciding what to eat.

Citing two recent studies that concluded egg consumption poses no risk for healthy people, the authors say those who developed diabetes while eating one egg a day were twice as likely to develop cardiovascular disease compared to those who ate less than one egg a week.

Highlighting "the remarkable effectiveness of the sustained propaganda campaign of the egg producers' lobby," the authors note both studies were funded by egg marketing agencies.

"There is no question that egg white is classed as a valuable source of high-quality protein," the authors conclude. "Egg yolks, however, are not something that should be eaten indiscriminately by adults without regard to their global cardiovascular risk, genetic predisposition to heart attacks and overall food habits."

In their conclusion, the study's authors say consumers would be wise to adjust their diet accordingly.

"In our opinion, stopping egg consumption after a myocardial infarction or stroke would be like quitting smoking after lung cancer is diagnosed: a necessary act, but late," they write.

But the industry association group, Egg Farmers of Canada, took exception with the report, calling it inaccurate and unfair.

It says eggs are nutrient-dense and low-calorie foods and that their cholesterol level is not a concern for most Canadians.

"While individuals with heart or other health issues should always consult with their doctors or dietitians about their diet, research consistently shows that the vast majority of people may eat eggs without concern," said Bonnie Cohen, a registered dietitian with Egg Farmers of Canada.

Laurent Souligny, chair of Egg Farmers of Canada, added that the report inaccurately cites the cholesterol level of eggs.

"If the researchers get this number wrong, we must question the accuracy of the complete report," Souligny said.